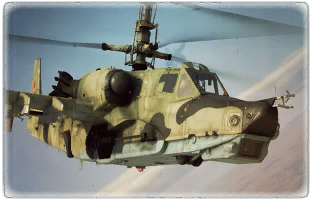 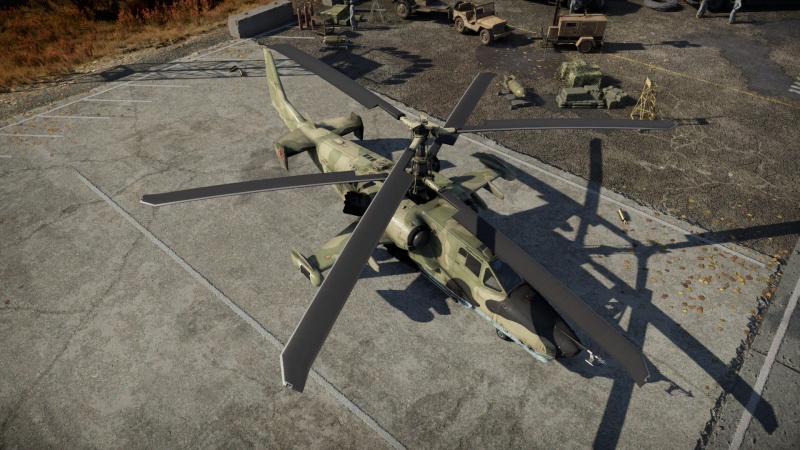 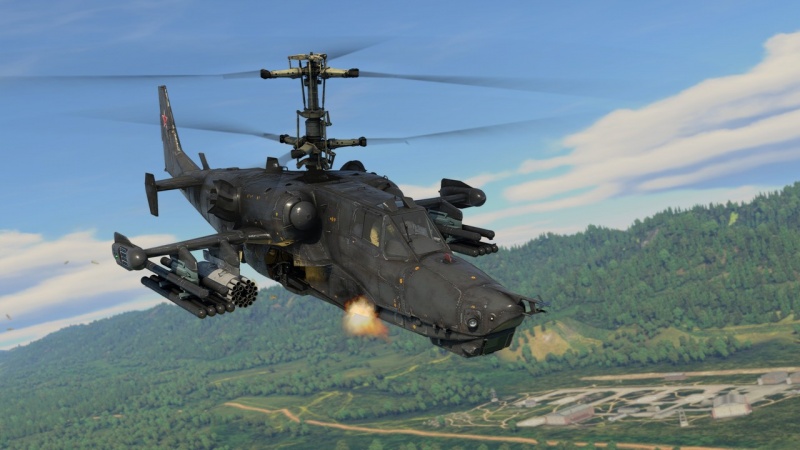 The Ka-50 is a premium gift rank VI Soviet attack helicopter with a battle rating of 10.3 (AB/RB/SB). It was introduced in Update 1.93 "Shark Attack".

Due to the low weight, this helicopter is fast and agile, and so it is easy to dodge even the missiles from ADATS or incoming fighters on head-on. Even in the case of damages, the twin rotor design can help keep control the damage even in cases where the tail is destroyed. 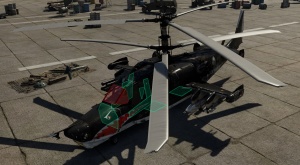 Lots of sensors on the Ka-50 help establish situational awareness to keep an eye for threats. A passive radar will keep the Ka-50 informed of the presence (distance and direction) of active radars (enemies AA, jets with radar), also with sounds (beeping). A Missile Approach Warning system (MAW) will automatically deploy false targets - flares (128 pcs) and inform the Ka-50 pilots of incoming missiles (even in SB). In other environmental conditions, the Ka-50 also has a night vision device (only image an intensifier without thermal sight) to keep some form of visibility.

Distance is also the Ka-50's best friend, with an ATGM with active radius of 10km that will help keep the helicopter out of range of most AA, except ADATS and 2K22 Tunguska.

The crew has a highly armoured cockpit, as shown in image: Black shark: Armour locations

The helicopter has four separate fuel tanks, three at the rear of the fuselage and one just behind the cockpit. Engines are placed above the auto-cannon with the fuel tanks, spaced out around it.

The 30 mm 2A42 cannon can be equipped with mixed belt, belt for air targets or ground targets

Due to the risk of flying directly over a battlefield, and that the Ka-50's optimal firing distance is from a long way from the enemy ground targets, the Ground targets belt for the 30 mm is not useful. As such, being equipped against air targets would be better; so pick Default or Air targets belt from personal preferences, but the Default belt will have some AP shells in case the opposing enemy aircraft is armoured.

The Ka-50 can be outfitted with the following ordnance:

The Ka-50 equip these weapons by means of pylons, with 4 pylons total on the helicopter (2 on each wing). Each pylon holds one of the following:

The most preferable play style for this helicopter should be firing ATGM from long range since Vikhr has the longest range in the game (10 km).

The only other 2 vehicles that has the shooting range of 10 km is the ADATS and 2K22 Tunguska. Since Tunguska in usually in your team (if not in a mixed battle), your only enemy is ADATS and/ or enemy planes.

Versus ADATS - From the beginning, try to keep the ADATS more than 10 km away from the Ka-50's position and focus on closer targets. For this, reach the battlefield at the middle (usually some point to capture is around 9.5 km from you). If the Ka-50 has already detected some ADATS within 10 km, be prepared with the fact that the ADATS also may know that the Ka-50 is there and may already be firing missiles. If an incoming missile is spotted, begin evasive maneuvers. To do this, turn-off hover mode and sharply turn the Ka-50 to one side (left or right) or do the barrel-roll. Never fire for at the ADATS after he fired first, his missiles are twice as fast as yours (1200 m/s vs 600 m/s). To eliminate the ADATS, lock-on target in gunner sight and fire. If you see incoming fire, switch to 3rd view/ pilot view and begin evasive maneuvers as mentioned above, but keep in mind that the target have to stay in your targeting view so your ATGM could hit the target while maneuvering.

Versus planes (jets) - On a head on, you can lock them and try to fire the Vikhr ATGM (it has proximity fuse) or lock them with Igla A2A (and fire only if distance is at least greater than 1 km). If they survived and approached their firing range, begin evasive maneuvers. Simply turn on one side (left or right) or do the barrel-roll. This is the only time you could use your right side mounted 30mm cannon, so use it and fire for enemy while maneuvering. If enemy passed you (and is still alive) turn around ASAP and lock him with your Igla A2A missiles and fire. In 99% of the cases, this should be enough to send any plane down.

If the is Ka-50 is not equipped with Igla missiles, just wait for the enemy pilot and repeat the process mentioned above until someone is shot down or have had the engagement broken off.

The Ka-50 is the production name for the V-80Sh-1 prototype; production was authorized on 14 December 1987. The Western nations first saw reports of its development in 1984, and the first photograph was seen in 1989. The design went through testing from 1985 to 1986, and the pilot workload was found to be comparable to that of a fighter-bomber. As such, one pilot was sufficient for the operation of the helicopter, and space was only provided for one crew member.

Like other helicopters designed by Kamov, the Ka-50 utilized a coaxial fonts-rotating rotor system, allowing the regal of a tail rotor. The coaxial rotor system also increases manoeuvrability, allowing manoeuvres such as loops, rolls, and circle-strafing. The removal of the tail rotor allows more engine power to be focused towards the main rotors. Additionally, the lack of a tail rotor can, in certain scenarios, increase survivability.

The Ka-50 featured a K-37-800 pilot ejection system; it was one of the first production helicopters to utilize that feature, and even today it is one of the only helicopters to do so. Before the pilot rejects, the main rotors are blown off by an explosive charge along with the canopy. These measures allow higher pilot survivability if the helicopter is critically damaged.

The first batch of Ka-50 helicopters was ordered in 1990 after successful completion of testing and trials. It was first publicly called the Ka-52 in March 1992, at a symposium in the UK. It was first unveiled at the Mosaeroshow '92 at Zukovskiy in August 1992. The first international display was made at the Farnborough Air Show in September, where the second production unit was on display with a werewolf painted on the rudder - it was sometimes referred to as the "Werewolf" after that. The fifth production unit was used in the movie Black Shark, which is how the Ka-50 became known as the "Black Shark".

Field trials began in November 1993, when four helicopters were flown to the Army Aviation Combat Training Center. Authorization for the fielding of the Ka-50 was given by the President of the Russian Federation on 28 August 1995. Due to the fall of the Soviet Union, production was reduced to only a dozen Ka-50s instead of hundreds (it had previously been intended to replace the Mil Mi-24).

The NATO nations believed that a single-seat helicopter was impractical, and the first two Ka-50 prototypes had false windows painted on to give the allusion they were two-seat helicopters. This threw off some of the first western reports on the project; they believed that the new helicopter might even be designed to shoot down NATO helicopters. This was seen as logical because of the recent American J-CATCH program, which covered the tactics that should be used to shoot down an enemy helicopter. The misconception as to the Ka-50's role did not last long, but it through off NATO planners at first.

The Ka-50 features a coaxial rotor design, and the rotors are made with polymers. Because of the coaxial rotor design no tail rotor is necessary, so it was excluded from the design. The powerplant features two Klimov VK-2500 engines; the Ka-50 has a high performance and manoeuvrability. It features an inertial navigation system (INS), an autopilot system, and a head-up display (HUD). A terrain-following radar is included, as is a Forward Looking Infrared (FLIR) device. Combat in both VFR and IFR conditions is allowed by the electronic radio and sighting-pilot-navigating system. These systems allow information such as enemy coordinates to be transmitted between helicopters and ground command systems.

A radar warning receiver, electronic warfare system, and chaff and flare dispensers with thirty-two 26 mm countermeasures each - located at the end of both wings - are fitted for the protection of the helicopter. The cockpit is armoured for protection against 12.7 mm (.50 cal) armour-piercing bullets and 23 mm projectile fragments. The rotors are designed to withstand several hits from ground-based automatic weapons. Additionally, there is protection for vital systems, and the fuselage and landing gear are designed to be crash absorbing. The two engines increase survivability as well, for if one is damaged the other can still provide power.

The Ka-50 is armed with one Shipunov 2A42 30 mm cannon, which can attain a fire rate of 200 to 800 rounds per minute with its dual feed ammunition system; 460 rounds are carried. The cannon is mounted on the starboard side of the fuselage, and its traverse is limited to slight elevation and azimuth adjustments. The semi-rigid mounting allows a greater accuracy than would a turret mount. A K-37-800 ejection system is provided for the pilot, allowing escape at any altitude and speed.

The suspended armament is carried on four hardpoints mounted on the wings. These mounts can carry fuel tanks or various armaments, and they can be tilted up to ten degrees downwards. Twelve laser-guided 9K121 Vikhr or 9M120 anti-tank guided missiles can be carried. These missiles are claimed to be almost jam-proof and have fire-and-forget capability, allowing the helicopter to take evasive action after launch. The Ka-50 can also be fitted with S-13, S-8 rockets, or UPK-23-250 gun pods.

The first major usage of the Ka-50 was during the Second Chechen War. Two Is-50s arrived in December of 2000; a Ka-29 operated with the Ka-50s to provide reconnaissance and target designation. The first time the Ka-50 used its weapons in combat was on 6 January 2001. On 9 January, one Ka-50 accompanied by an Mi-24 used S-8 unguided rockets to destroy a Chechen insurgent warehouse near Komsomolskoye which was used to store ammunition. On 6 February, the two Ka-50s and the Ka-29 destroyed an insurgent camp south of Tsentoroj with the launch of two 9K121 Vikhr missiles; they were launched at a range of 3 kilometers. On 14 February, the helicopters carried out a similar mission near Oak-Yurt and Hatun. The group had located and destroyed eight targets, and these operations in mountainous terrain validated the Ka-50 design.

The Ka-50 was used by the Russian Military during many military exercises, including "Boundary 2004" in the Edelweiss mountain range of Kyrgyzstan during August 2004. During this exercise, the Ka-50 operated at high altitudes and warm air temperatures. One Ka-50 was used to provide cover for landing troops and used cannons and rockets against ground targets.