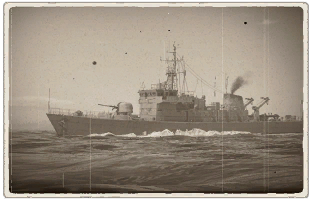 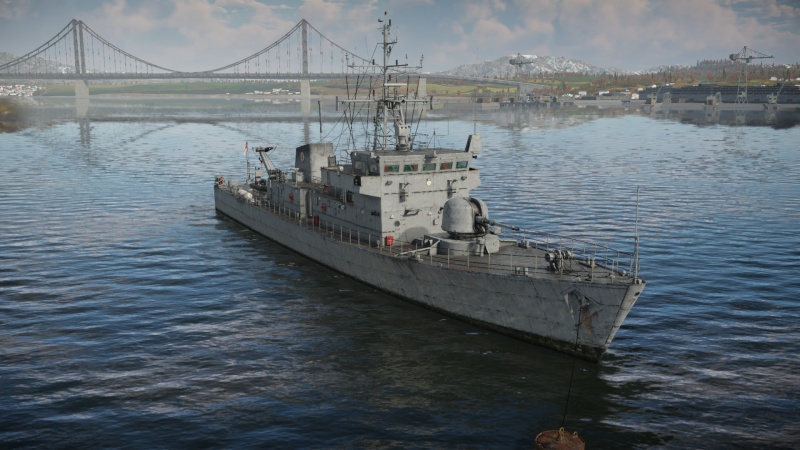 The Peacock-class, HMS Peacock (P239) is a rank V British sub-chaser with a battle rating of 3.7 (AB/RB/SB). It was introduced in Update "Raining Fire".

The HMS Peacock, pennant number (P239), is the lead ship of the Peacock-class corvette. These 5 corvettes were specially commissioned during the 1980s for service in Hong Kong's 6th Patrol Craft Squadron, protecting the British empire's colony (Hong Kong) and performing numerous security-peace operations.

Peacock delivers a brand-new and unique punch of naval power for the veteran British captains of the coastal fleet. The ship's play style is dependant on her sole bow gun; a 76 mm OTO-Melara Compact. Despite seeming like not enough firepower, she is really threatening in the hands of skilled players. The gun is not only capable of victimizing patrol boats but even destroyers!

Her mobility and size leave a lot to desire as she will feel sluggish around the extremely manoeuvrable fast patrol boats and attack crafts of her rank. But slow and steady, the ship will arrive the combat-zone, where her full potential will be unleashed.

Peacock shouldn't be underrated, as it possesses enough crew size to endure some damage and a powerful gun capable of sinking multiple boats pretty quickly. Her mobility isn't great so players might need to plan a designated course in advance.

Although possessing a powerful main armament, Peacock lacks any secondary or auxiliary guns. She is also absent of any explosive or special armament. Her only protection will be the 76 mm gun. 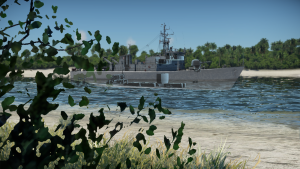 The small size of the ammo rack in the distance is difficult to detonate as is placed near the waterline.

Peacock's crew is 31 sailors. The crew size is between the average size of fast attack crafts, but it's below average when contrasted with gunboats or barges. The crew size is still very modest to fight against any destroyer in a crew-endurance duel. Often ships with a high rate of fire and really good cruising performance, like the soviet Pr. 206, will reduce the Peacock's crew percentage in a short time - Players need to be on the lookout for these rapid fast-firing boats since they endanger the Peacock's survivability.

Peacock can easily face patrol boats which are faster and smaller than her, but she can also receive serious damages when those boats fire first. Her single main gun is linked with the survival of the whole ship. The gun will provide the only protection against sea-borne and air targets. If the main gun is disabled, Peacock is in big trouble.

There's no armour shielding in the whole ship, the sole bow turret is also exposed and without armour shielding. The ammo racks are unarmoured but their small size compared to the spacious hull size, allows them some protection when directly targeted. The ready ammo rack is located right beneath the turret, this becomes a vulnerable area since the 76 mm gun will often be knock-out of combat by enemy fire which might hit the ready ammo-rack; causing the loss of the ship.

The bridge is really large and vulnerable, but since the mobility of Peacock is not as amazing as the patrol boats, loss of control of the ship will not affect her playstyle. Another noteworthy vulnerable area of the ship is the stern, this area is unprotected by any gun. If a faster ship flanks, Peacock will be unable to defend the aft of the ship. Then now is when mobility, smart positioning and friendly presence grants an advantage. 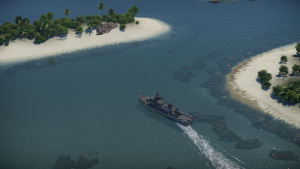 Shallow waters and Coral reefs limits the mobility of the HMS Peacock on certain maps.

HMS Peacock's mobility is not great amongst the highly manoeuvrable fast attack crafts and torpedo boats of her rank. This should not be seen as a condemning drawback, but instead, as an opportunity for a different paced gameplay. Letting the enemies reach the Peacock and not oppositely.

In this ship, the reverse speed plays an important role. As firing and then retreating behind a smokescreen are key in Peacock's survival. Unfortunately, the reverse speed is not excellent but only just proper enough to retreat before the corvette gets destroyed.

HMS Peacock is a huge corvette which spawns amongst patrol boats, this could be a problem on some maps as the shallow waters with rocky formations will often hit the Peacock and accidentally reduce the crew size. Notice the shallow water alert in the centre of the screen to change course immediately, as the poor steering of a stock Peacock will not help avoid the crash.

The most crucial modifications to acquire are Tool set and Fire Protection System. After that, acquiring the SAP shell will offer the opportunity to engage heavily armoured vessels. Then the smokescreen and HE-VT shells should be acquired, permitting the needed defence against aircraft. Mobility upgrades and protection follows.

HMS Peacock is armed with a single 76 mm/62 OTO-Melara Compact, located at the bow of the ship.

Despite being armed with a single 76 mm gun, the quick reload of only 0.8 seconds allows for a lot of damage in just an instant. The HE shell is composed of a powerful explosive mass of 1.08 kg of TNT. This single gun is not capable of hullbreaking any boat, but the explosive damage and the high rate of fire are more than enough to fend other threats at the rank.

The gun offers satisfactory firing range, up to 6,000 m. However, firing at such distances is not advised due to a very limited ammo count. The ammo count of 115 shells is sufficient to destroy numerous small boats, as 1-3 shots will be enough. But long-distance engagements and destroyers will require a lot more of ammunition, leaving the ship unable to defend or with reduced efficiency. As once the ready-use ammo of 85 shells is fired, the remaining ammo will be fired at a much slower rate.

The turret mounting is highly mobile and provides adequate targeting speed, something beneficial for the reduced ship's mobility.

Due to the scarcity of ammo for all types of threats, once the HE-VT ammo has been researched, It should replace the regular HE. Consider arming the ship with SAP and HE-VT for more effective defence to fend off some planes; HE-VT being the main ammo and SAP the auxiliary for armoured encounters.

Peacock game style should be based on: Fire first, stay concealed and guard near capture zones.

Firing first must be a priority as experienced players or lucky newcomers will fire at the single turret; after the turret is destroyed, there won't be much else to do than retreat.

In some maps, she will be quite troublesome to conceal as her entire bridge will be exposed. Peacock is enormous when compared to the nimble and small-sized boats like the Soviet G-5 and the German LS 3, so the best cover for Peacock is behind solid structures and peeking behind tall coastal formations. Remember the only area needed to be exposed is the bow, where the gun is located. Avoid open areas were the enemy boat can surprise Peacock from behind but instead find corners to perform quick surprise attacks. 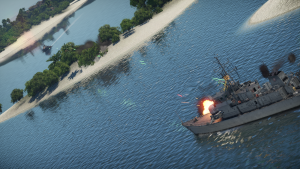 The flat trajectory of the 76 mm shells avoids the Peacock to fire behind cover, while most enemy boats can.

For comparison, the playstyle is opposite to the Brave class which uses low land formations to engage from afar, high mobility and superiorly ranged firepower. Peacock uses high land formations, slow mobility with adequate placing and short lethal linear fire.

Peacock's commanders should be directed towards capture zones since the shortage of ammunition will eventually be evident. Reaching these capture zones will provide a lot of targets to fire at, particularly the small vessels arriving recklessly, which are soft targets for the mighty OTO-Melara gun.

This stationary role helps with Peacock's poor mobility as now it performs as a prominent sentinel guarding the capture point, without the obligation to voyage the entire map risking the slow ship to be ambushed or torpedoed.

The most beneficial maps for close engagements on Peacock are: African Gulf, Norway, Coral Islands, Arabian Sea, Ireland Bay, North Port and Mediterranean Port. These maps offer solid land barriers to conceal the entirety of Peacock and the chance to surprise with quick devastating fire.

Peacock can provide air cover in a minor role thanks to a powerful radar, a lead indicator and the HE-VT ammunition. However, she must be carefully screened against air attacks. Any plane noticing Peacock will eagerly bomb or strafe the ship. This role is useful against attackers and large bombers arriving later in the battles. The proximity-fused anti-air shells along the quick fire of the 76 mm gun will do an adequate job, but attempt to conserve ammunition.

Destroyers: While destroyers are capable of decimating HMS Peacock's crew, this corvette can cause the same harm to them. Their crew complement will quickly be reduced to 0% if they do not retaliate on time. Peacock must be overwhelming in the first salvos to cause irreparable damages to the targeted destroyer.

The gun and shells are capable, but the only notable drawback of attacking destroyers is the poor ammunition that limits extensive actions versus destroyers. Notably, the American well-armoured destroyers will be somewhat complicated to sink, the Sumner class and Fletcher class are resilient to HE impact; so sometimes SAP must be employed. 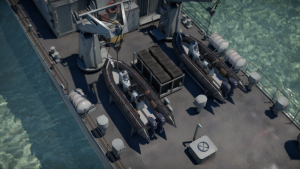 Avon Searider SR5M rigid-hull inflatable boats were used for training and by a small group of Royal Marines onboard the Peacock.

Between 1983 and 1985, 5 corvettes were built in Aberdeen, United Kingdom. They were part of the Peacock class and had the purpose to operate exclusively in the tropical waters of Hong Kong as part of the 6th Patrol Craft Squadron operating from the naval base, HMS Tamar, during the '80s.

They were specially fitted for the local tropical weather and carried a wide variety of equipment for naval operations; it was even possible to remain at sea during typhoons. They operated for three years, performing anti-piracy, rescue training (SAR), vehicle recoveries and policing in Hong Kong waters with the local security forces against illegal operations; therefore representing the UK's presence in the region.

Their service finished in October 1988, with HMS Peacock and another 2 corvettes being sold to the Philippine Navy on 1 August 1997. Now under the name of BRP Emilio Jacinto, part of the Emilio Jacinto class, she was up-gunned for modern demands and serves up to this date.

The 2 remaining Peacock-class corvettes, were sold to the Irish Naval service in 1988, both of which are still in service in Ireland.

Between 1983 and 1985, British shipyards produced five Peacock corvettes, specially designed for operations in the waters of Hong Kong. To allow for effective service in the tropical climate, the Peacock corvettes were fitted with features such as air conditioning and the ability to remain at sea even during typhoons.

Upon completion, all five vessels were assigned to the 6th Patrol Craft Squadron, operating out of Hong Kong. During their service, Peacock corvettes would, apart from showing a military presence in the area, also successfully aid the Hong Kong Police Force in fighting illegal immigration and smuggling.

However, after Hong Kong was returned to China in July 1997, three of the Peacock corvettes were subsequently sold to the Philippine Navy, where after several modernizations they still serve to this day.

Similarly, two of the Peacock corvettes were sold to the Irish Naval service in 1988, both of which are still in active service with Ireland.

An gameplay video of an adequate map for the Peacock.
Quick tour in the deck of the Peacock, now in Philippine Navy service.