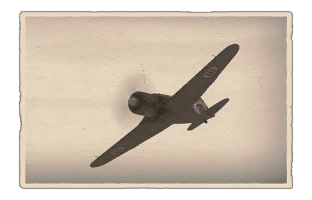 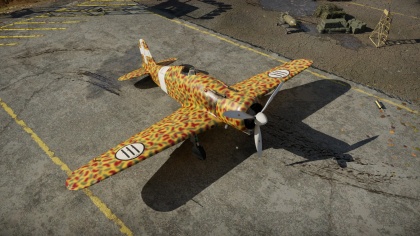 The G.50 Freccia AS serie 7 is a rank I Italian fighter with a battle rating of 1.7 (AB/RB) and 2.0 (SB). It was introduced in Update 1.69 "Regia Aeronautica", though a variant existed in the German tech tree prior to the update.

In general, its decent rate of climb means it is easy to ensure you have proper altitude to play around with first. Generally for low tier planes like the G.50 3,000-4,000 m is generally enough, from there, the way of flying should be dedicated by the situation and opponents. Its good acceleration in dives and respectable dive speeds means it can be used as a Pure Boom & Zoomer, especially when you realize its energy retention is better then that of many other planes at its battle rating. However, it is a decent turn-fighter, barring the poor acceleration, so it can be used as such as well. Be warned on regular biplanes and Japanese monoplanes. Both of which are considerably better, bar high speeds, where the stiffness of controls on the G.50 are less than on either biplanes or Japanese planes.

The G.50 AS serie 7 can be outfitted with the following ordnance:

The Fiat G.50 Freccia is a typical Italian pre-war design, its fairly sturdy, has modest speed and poor armament consisting of 2 Breda SAFAT 12.7 mm guns mounted in the upper cowling, which means it has the distinctive low rate of fire (roughly 400 rounds per minutes). However it does have its merits as well, its fairly agile, it has no trouble dog-fighting Hurricanes it will commonly face, and if things become too hectic, the G.50 can quickly escape by going into a dive, and exploit its surprisingly good dive acceleration to gain separation. Furthermore it pays to be aware of its modest acceleration and overheating, as such, its generally advised to maintain an eye on your speed and use WEP sparingly.

For the armament, the same applies to all other Italian aircraft; generally you want to use Tracers, Anti-air or Stealth since they are the belts that deal the most damage. Shell velocity is low, hence they suffer above 300 meters, so only fire at or below that range for best effects. Furthermore, much like the other Italian fighters the armament is woefully inadequate to deal with bombers, hence it is best to avoid them entirely, or focus on taking out the engines. Only exception are the very early biplane bombers, such as Swordfish, Po-2 and the like.

The Fiat G.50 "Freccia" ("Arrow") was the first monoplane fighter to be adopted by the Regia Aeronautica. Designed for a 1936 fighter tender, the G.50 competed with a number of contemporary Italian designs like the Macchi C.200 "Saetta". It was a clear step above the CR.42 "Falco" biplane fighters that had equipped the Italian military at the time: the all-metal monoplane construction with retractable landing gear and an enclosed cockpit gave it superior speed to the outdated Falco. The development process was complicated, however, and the G.50 underwent many revisions in response to changing specifications and design flaws uncovered by testing. For example, the enclosed cockpit was abandoned after the first production series. Though it arrived and began production earlier than the C.200, the overall performance of the Freccia was somewhat inferior, especially in terms of speed. It was retained since retooling the Fiat factories to produce Saettas would take too much time, effort, and resources. The basic G.50 was produced from 1937 to 1940. It saw considerable service during World War II, but due to the rapid pace of aircraft technological development, it was outdated even at the start of the war. Slow speed, poor armament, limited range, and a complete lack of armor protection did it no favors. The Hawker Hurricane, itself not a cutting-edge fighter, easily outclassed the Freccias during their deployment in the Battle of Britain. The G.50 had somewhat more success in North Africa against British aircraft. They were eventually relegated to fighter-bomber roles, which they fulfilled well. Other users of the Freccia included the Independent State of Croatia and Finland. The latter used their G.50s to surprisingly good effect against the Soviet Union, but they were ill suited for the freezing northern climate and were held in lower regard than other foreign aircraft obtained by the Finnish Air Force.

The G.50 AS (Africa Sahariana) was a modified variant of the G.50 for use in desert conditions. It appears to have been based on the G.50bis, an improved mark of the original G.50 that became the production standard from 1940 onwards. The -bis added a fuel tank to the rear fuselage behind the pilot, revised the aerodynamics of the rear fuselage and control surfaces slightly, and made the tail wheel retractable. This fixed the Freccia's issue with range, the flight time being extended to two hours, but performance was very similar. The issues with speed and firepower still remained and it was not quite a satisfactory fighter for 1940-1943. The changes specific to the AS were quite simple: a dust filter was installed on the engine air intake, bomb racks were installed, and the landing gear was tweaked again for better sand resistance. The filter was a very important addition since the G.50 had initially been deployed to Libya without any special modifications and the sand unsurprisingly took its toll on the aircraft. Engine life was still markedly reduced with the filters installed but the improvement was welcome. The bomb racks allowed the Freccia to attack ground targets, leaving most air-to-air combat to higher performing Macchi fighters like the C.202 "Folgore".