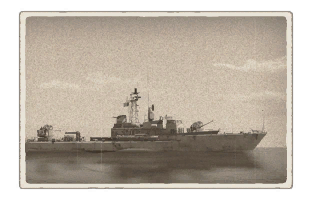 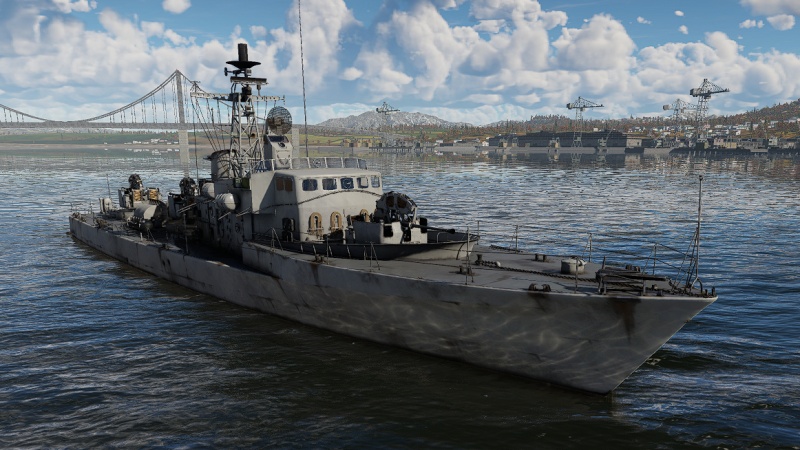 The MC 590, Freccia P-493 is a premium gift rank IV Italian motor torpedo boat with a battle rating of 4.7 (AB/RB/SB). It was introduced during Update "Starfighters" as a reward for the 2020 Operation S.U.M.M.E.R. event.

The only armour on this vehicle surrounds the main cannons, which can be useful for keeping the guns operational when coming under fire. However, the rest of the vehicle has no armour protection.

The Freccia can survive a number of hits when dealing with gunboats, but higher-calibre cannons such as those on destroyers will have no trouble sinking it.

The ship has good speed for its size, but lacks manoeuvrability.

The main armament on the Freccia are 40 mm/70 Breda-Bofors type 107 cannons, one at the bow and one at the stern, as well as the option of an additional cannon amidships by sacrificing the torpedoes. These guns have access to two ammunition belt types, High Explosive Fragmentation Incendiary Tracers belts or High Explosive Variable Time Fuse belts, the latter of which has a 7 m trigger radius making it quite useful for dealing with enemy aircraft, especially when they are at relatively close range.

The turrets have a full 360° arc of horizontal rotation and traverse at 95°/second, certainly fast enough to keep up with most surface and air targets. These guns are protected by some armour which will aid in keeping them operational against enemy fire, although this is the only armour on the whole vessel.

With its powerful 40 mm cannons, the Freccia can shred most enemy boats. However, it lacks armour and since the cannons have difficulty damaging most bluewater ships, it is better to stay in the coastal areas of the map. Carrying torpedoes reduces the firepower against boats, but it will make it viable to kill destroyers since the torpedoes deal decent amounts of damage. The 40 mm cannons have HE-VT rounds so the Freccia can kill most planes without problem. Noteworthy enemies are the Pr. 206 and its variants: MPK Pr.12412, SKR-7, and also the Saetta since those ships can deal massive amounts of damage to small boats.

The patrol boat P-493 Freccia is the first ship of the MC Freccia class. It was built at the Riva Trigoso shipyard (CNR Riva Trigoso).