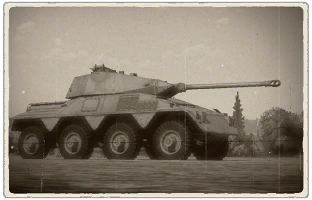 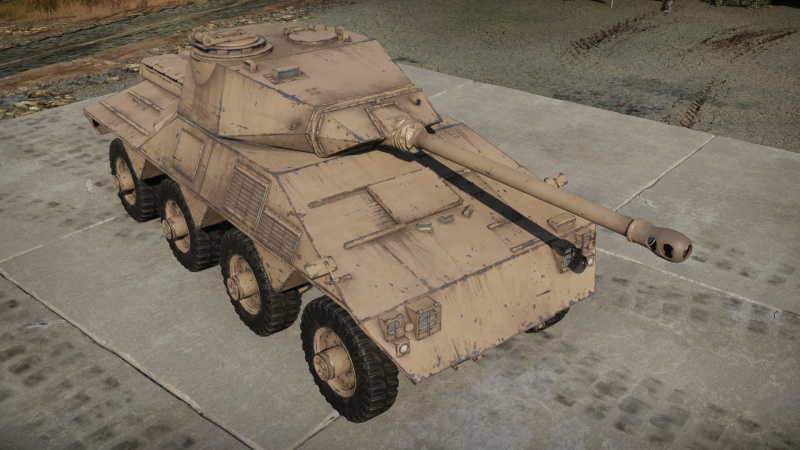 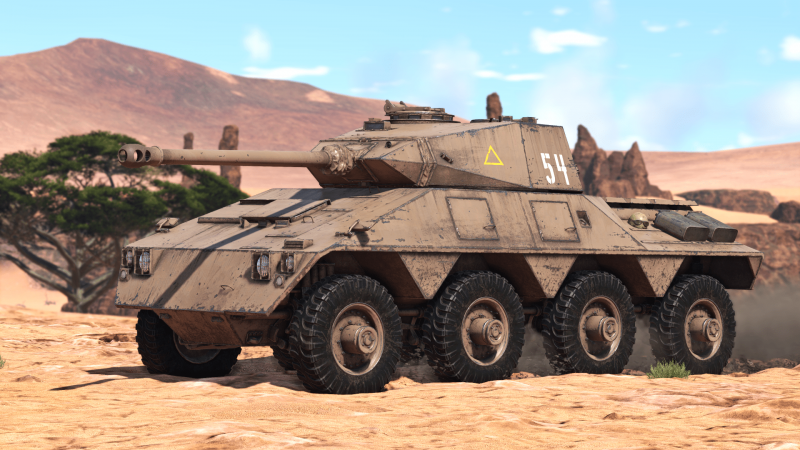 The Concept 3, New Generation Armoured Car is a rank III British light tank with a battle rating of 4.3 (AB/RB/SB). It was introduced in Update "Red Skies".

The Concept 3 is a direct ancestor in development to the well-known Rooikat family of vehicles. Though it lacks the level of agility those vehicles can attain, the Concept 3 is by no means a slouch. Offering a fast and punchy contender to follow up from the SARC vehicles players will have experienced prior, boasting the same firepower not seen until later British medium tanks but on a nimble albeit fragile chassis.

Like the American M18 Hellcat, the Concept 3 only has 12.7 mm (0.5 in) of armour in most areas, with some areas being only 6.5 mm. As a result, anything at this BR can penetrate this vehicle's armour. Compounding issues, the Concept 3 has ammunition scattered all throughout its body. In other words: while incoming fire from the sides is somewhat prone to overpenetration, this cannot be depended upon. Try to avoid being shot at in the first place.

However it is worth noting the geometry of the Concept 3 when presented from the front. While thin, the armour can ricochet rounds with far more consistency than one might expect, offering angles of around 65-80 degrees across the frontal profile.

The Concept 3 represents the crystallization of the set of traits that define the South African tech line. It is able to comfortable reach 70+ km/h when stock on paved roads and a respectable 40-50 km/h across rough terrain with the common exceptions of boggy, sandy, or snow-covered ground. It will get the player where they wish to go swiftly; however, owing to its 8 wheel design, it does offer a much more sluggish turning radius than its predecessors in the SARC family, or its contemporary in the SPAA line, the Ystervark. Take care to begin turning earlier than than previous vehicles to avoid crashing into a street corner or odd boulder.

The suspension is superb even stock, allowing the Concept 3 to maintain good speed across rough ground and steady the chassis swiftly upon halting; crucial to bringing its armament to bear upon its target or a surprise encounter.

At its battle rating, the threat of coming up against such formidable tanks such as the Tiger H1, IS-1, and the M4A3E2 Jumbo means that after the necessary acquiring of the parts and FPE kits, players are advised to prioritise the unlocking of the Shot Mk.8. While the stock Mk.6 can be sufficient in examples such as engaging the frontal plate of a Tiger H1, the extra penetration is more reliable insurance, particularly when engaging Soviet tanks.

Further on it is advised to acquire the Horizontal turret drive as stock the traversal of the turret is poor, from there it is entirely up to player's choice if they wish to improve the turret's elevation and accuracy or focus on the mobility aspect of the Concept 3 first.

Due to highly mobile playstyle, one might try to fight on the move or to attack by driving uphill to suddenly shoot enemies. Unfortunately, the gun is not stabilized and the gun elevation speed is extremely slow, which leads to significant uncontrollable "rocking" of the gun, inevitably pushing it down into the ground. This makes fighting on the move in RB/SB very difficult to the point of impossible. Thus, one should always wait until the gun has settled, or drive over completely flat terrain and slow down before firing to try one's luck.

In AB, the rocking can be countered by maxing out "targeting" and "leadership", gaining at least "expert" crew qualification and getting all of the tank modifications. The gun will still shake a bit and fail when the car is moving over hills, but the gunner will try his best to stop this.

The gun also has a very powerful recoil, which slows the car down and can throw it around if fired broadside. It's generally not fatal, but it can be extremely annoying when firing to the side off slopes, because it will move the car and ruin the aim by pushing the car above the gun depression threshold.

Due to the low weight of the car, any enemy can ram the Concept 3 to prevent it from firing. Melee combat with tanks is possible, but going literally into their face is not recommended.

While lacking the APDS rounds of the Comet I, the Concept 3's rounds are pretty impressive for its BR, capable of penetrating the thickest of armour, including the dreaded KV-1 (ZiS-5). The post penetration damage won't be as good as an APHE round, but it is quite acceptable. 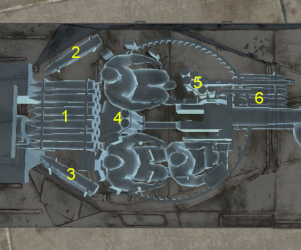 Ammo racks of the Concept 3

The Concept 3 will be the first iteration of the iconic 8 wheeled light vehicles that return often along the South African tech line. This vehicle is extremely large for a scout vehicle, eclipsing the Panzer IV in height and length. Concealing the Concept 3 will prove to be a difficult challenge for the player, usually finding themselves relying heavily upon its mobility to compete.

As with most if not all of the South African vehicles, the Concept 3 boasts an excellent level of mobility. A viable tactic for the Concept 3 can be to advance swiftly to a good position and provide scouting support, taking shots of opportunity when they present themselves. The player is advised to prioritize positions that allow an easy avenue of escape to ensure the potent mobility of the Concept 3 is not rendered useless, especially the superb reverse speed of this vehicle.

The Concept 3 has little in the way of armour to rely upon, only being able to resist rifle calibre rounds where a flat strike is concerned. The vast majority of munitions fired at the Concept 3 will penetrate its armour, with some parts of the armour still thick enough to activate the fuse of an APHE round. Avoiding being struck is always the most favourable scenario for any vehicle. However the Concept 3 can in some instances show surprising resilience in the harshly angled geometry of its frontal profile which boasts the aforementioned extreme angles of around 65-80 degrees. Many rounds such as the BR-350SP round utilised by the T-34 family have a ricochet chance of 100% at 71 degrees of angle. Meaning that a savvy Concept 3 player can use the respectable gun depression of 10 degrees to increase these angles and be a more tricky contender for an inexperienced opponent.

In conclusion, the Concept 3 can be reliably played the same way as the previous SARC vehicles albeit with a punchy gun and a little trickery in the armour department with ricochet.

The Concept 3 was based on the British FV603 Alvis Saracen Armoured Personnel Carrier. It was designed to fulfil a new South African requirement for a "New Generation Armoured Car". The project started in 1976 and ended in 1979. 3 testbed vehicles were made, Concept 3 being one of them. The Concept 3 differed from the Alvis Saracen APCs - it had an 8-wheel configuration, giving it superior off-road characteristics and superior performance. The Concept 3 was fitted with a 77mm OQF Mk.II, identical to the one found on the A34 Comet I which, while underwhelming for the time was merely a placeholder and was later swapped for a 105 mm Royal Ordnance L7 which was a licence built version of the same gun found on the British Centurion Mk 10. The L7 variant was known as the "Bismarck". The vehicle was built by South African company Sandock-Austral (later merged into BAE Systems), the same company credited with creating and producing the Ratel family (Ratel 20 / 90) and the Eland 90 Mk.7. Several tests were conducted over the years at Potchefstroom, South Africa. The Concept 3 series was nicknamed the "Cheetah" and the vehicle was officially designated "Concept 3, Class 2B" and was built to slightly different medium specifications, raising the original weight of the vehicle from a modest 17 tonnes to a rather considerable weight of up to 23 tonnes.

When all is said and done, the Concept series deviated from the original vision of the Armoured Personnel Carrier, morphing into a light Armoured Fighting Vehicle or reconnaissance car. The original intended role of Armoured Personnel Carrier was ultimately fulfilled by the excellent Ratel family which doubled as an effective Infantry Fighting Vehicle. Therefore the South African National Defence Force ultimately cancelled the order for the Concepts, and immediate further development of the Concept programme was promptly terminated.

However, the legacy of the Concept cannot be asserted enough: the basic design of the Concept and in particular its chassis would later become that of the Rooikat family (Rooikat 105 / MTTD / Mk.1D / ZA-35) which are still used to this day. The Concept, while often forgotten, disregarded and dishonoured is perhaps one of the most - if not the most - influential military vehicle design in South African history.