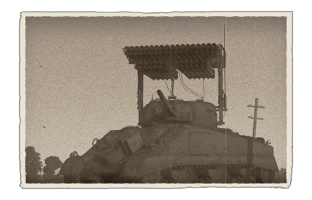 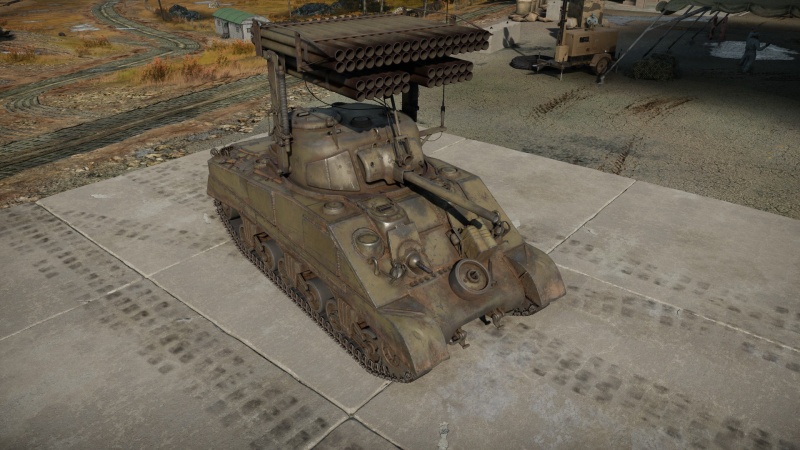 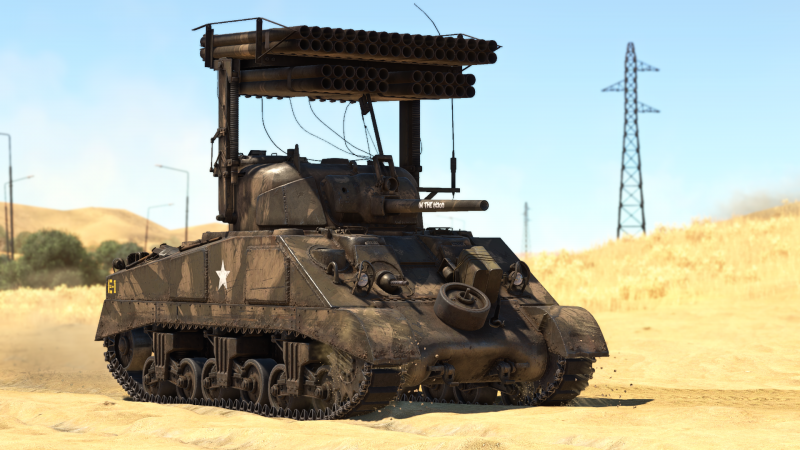 The Rocket Launcher T34 Calliope is a premium rank III American medium tank with a battle rating of 4.3 (AB) and 4.0 (RB/SB). It was introduced in Update 1.49 "Weapons of Victory". Though using the base model of a M4 Sherman, it has a 60 round rocket rack sitting above the turret that fires 114 mm rockets at a general location. While giving the team a good edge in firepower, the rocket rack also presents a large weak point that can be targeted with a high-explosive round for an ammo-rack detonation.

Rocket launcher tubes can easily be detonated by high-explosives when they are loaded with rockets.

With a large calibre HE round, a single hit to the rocket rack can knock out the entire tank. Since the round detonates all the rockets in the rack explode, causing an apocalyptic explosion which blows the turret off and knocks out the crew.

The rocket rack is not protected by any armour plates, it only has 5 mm structural steel. Since the rocket racks are installed above the turret, it allows you to fire over objects. However, the disadvantage is you can no longer hide behind rocks and objects for safety. Using the M8 rockets, the M8 rockets are not armour piercing they are high explosive meaning they will detonate when they hit something. The M8 rockets can be used to distract enemy tankers and cause lots of damage to their tanks. Another advantage of using the rockets, they fire rapidly and can knock out light tanks and lightly armoured fighting vehicles with ease.

The Sherman Calliope packs the legendary 75 mm, M3 cannon the cannon can make short work of enemy tanks. To best use this cannon, use the shot and AP rounds. It's best not to have any rockets in your rocket ammo rack, when you engage in short close range combat, due to the risk of a HE or an arty round penetrating and knocking out your tanks by destroying the rocket racks.

However, using the cannon and rockets together can be an exceptionally good combination – the quick reload time of the cannon and combined with the rockets makes for a very potent tank. To get the best out of this, use the terrain to your advantage. Use buildings and trees to hide behind, then pop out when the enemy drives by and shoot them fire the rockets to cause disorientation, they will produce a thick dark cloud preventing your target from locating you. Then fire the 75 mm M3 cannon into the enemy turret and knock it out. 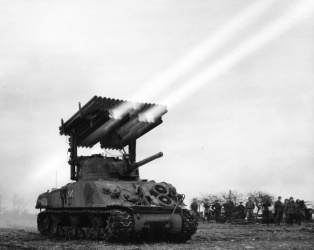 The Shooting Range #6 - Challenge section at 05:58 discusses hunting aircraft with the Calliope.