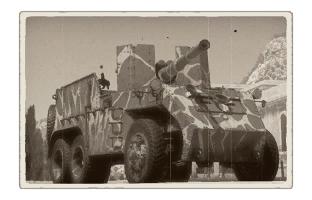 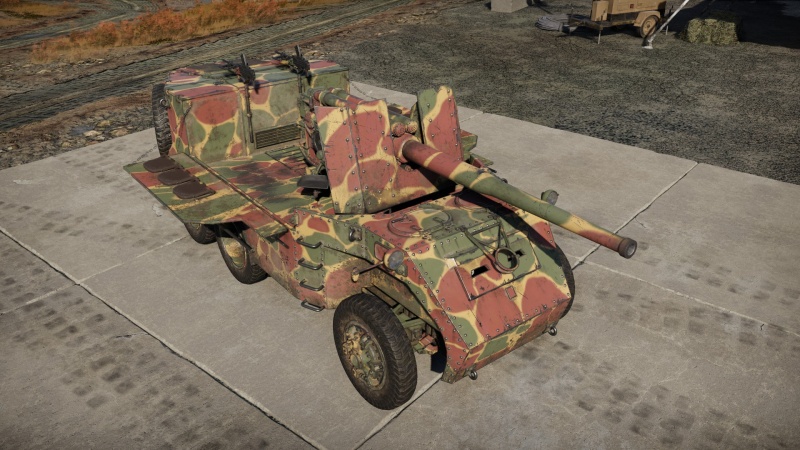 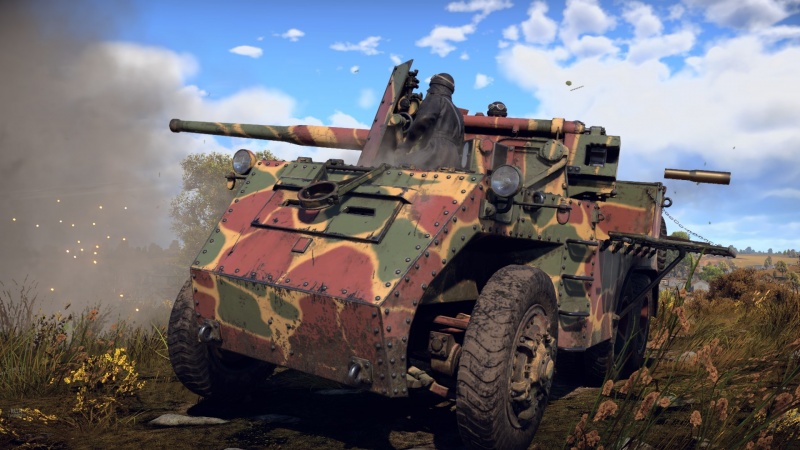 The Breda 501 represents a large and poorly armoured target for any enemy vehicle. The crew members, barring the driver, are extremely exposed to machine gun fire and players will regularly find themselves being strafed by aircraft.

The vehicles' internal modules are spread throughout, with the engine and ammo racks being placed high up at the rear behind only 8 mm of armour. This makes it possible for the Breda to be immobilized entirely by machine gun fire. As well as this, the Breda 501's gun breech is totally exposed and rises above even the minimal side armour, making it incredibly easy to knock out from the sides.

The thickest armour on the vehicle is the 30 mm gun shield and frontal plate. This protects from heavy machine guns but does little to stop any kind of tank shell, making the Breda 501 easy to penetrate even for even an lower-rank SPAA.

Despite the Breda 501's thin armour and large size, these traits can often work in the tank destroyer's favour. The thin plating of the vehicle means that shells will often over-penetrate, and the large size of the truck and the well spaced crew means that if a shell does hit the truck, the damage is minimized and often non-lethal. Additionally, the nature of the Breda 501 as an open-top tank means that enemy tankers will often instinctively attempt to kill it not with their main cannons, but rather their MGs, which require precise aiming to hit the 4 exposed crew members. Most of said rounds will often just bounce off the 30 mm gun shield, which can buy valuable seconds to either kill the enemy or to run away.

As a wheeled vehicle the Breda 501 struggles on any kind of soft ground such as snow, sand and wet mud. It also cannot turn on the spot as a tracked vehicle can, making turning the vehicle around in a confined space extremely time-consuming when combined with its very slow reverse speed.

However, the Breda 501 does boast a high straight-line speed, and can easily hit 50 kph on flat smooth ground allowing it to outrun the majority of vehicles it faces. It can also corner quickly when moving forward, allowing it to zip around the streets of urban maps at high rates of speed, perfect for a flank-minded playstyle 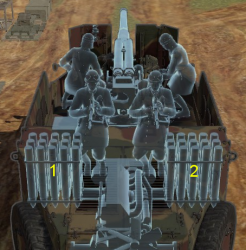 Ammo racks of the Breda 501

The small calibre of the Breda Mod. 38 machine gun makes it largely ineffective against all armoured vehicles but the ones with an open compartment. Facing backwards, it can't even be used to ping targets as a rangefinding help or to mow down minor obstacles blocking your line of sight.

The Breda 501 boasts a very effective high-velocity gun for its rank, offering high penetration and excellent post-penetration damage. This combines well with the vehicles' high top speed and allows players to quickly get into strong flanking positions early in the game. The Breda can heavily punish enemy vehicles from a variety of ranges in these positions.

The Breda can also be used in a more aggressive role on some urban maps. The 90 mm gun has an excellent horizontal traverse range, meaning players can get their gun sighted around corners without fully exposing the vehicle. With a high top speed, the Breda can knock out enemy tanks before quickly disengaging, although players must beware of the slow reverse speed when planning an ambush.

The Breda will often encounter the Sherman Jumbo, whose thick, angled frontal armour presents a significant challenge. If possible the Breda should look to flank the Jumbo, where its gun can easily obliterate the US tank from the side. If forced to engage an angled Jumbo from the front, the Shermans' machine gun port represents a small weak spot. Aside from this, shots into the turret ring can penetrate the Jumbo, but this may not be reliable.

The Italians had truck-mounted their heavy AA guns beginning in 1927 with the Autocannoni da 75/27, mounted on an unarmoured Ceirano chassis. 24 of these were manufactured and used during the Spanish Civil War, and some were still in service in the early stages of the North Africa campaign. The first Autocannone da 90/53 was a similar Lancia 3 RO 4x4 heavy truck with bolt-on frontal armour and the 90mm AA gun, and intended to be used as a dual-purpose anti-tank weapon as well. Somewhere around 50 may have been built, and they served throughout the Italian War, beginning in early 1942 with the 132nd Artillery Regiment in the Ariete Division. The Italians planned a change to the Breda Dovunque 6x6 truck in its place, which would have made the Breda 501 shown in game.

During the North African campaign, the Italian military quickly realized the effectiveness of their 90mm heavy AA cannon, commonly mounted on utility trucks. The cannon turned out to be just as good at dealing with enemy tanks as it was combating aircraft, being able to pierce the armor of virtually any allied tank it faced in the deserts of North Africa. However, whilst the mounting on truck chassis allowed the guns to be moved around with relative ease, the large silhouette and lack of armor protection heavily exposed these vehicles and their crews to even rifle-caliber fire, yet alone to shrapnel from nearby explosions. In 1942, the military top brass came up with a set of requirements for a new vehicle which would build up on the proven gun truck concept used in North Africa by increasing protection and mobility. The new vehicle would be designed as a dedicated SPG, intended solely to provide support to armored regiments in combating enemy tanks. Shortly after, the Breda company began work on a vehicle around those specifications. Breda based their new design on a chassis of an existing utility truck and added armor plating to the vehicle's front and sides. The 90mm cannon would be installed in an open fighting compartment in the vehicle's rear. In 1943, the prototype was finished and began undergoing testing as the Breda 501. Although the Breda 501 had successfully proven itself during testing, further development and potential mass production was hindered by Italy's capitulation in late 1943. The project was ultimately cancelled with the signing of the armistice in late 1943 with only a couple prototypes of the Breda 501 being built of which none saw any combat use.