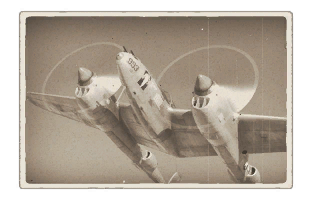 Richard Bong's P-38J-15 Lightning is a rank IV American twin-engine fighter with a battle rating of 4.3 (AB/RB/SB). It was available in Update 1.57 "Battle March" to be obtained during the 2016 "Chronicles of World War II" after completing 22 "Aircraft Tasks". The plane is painted after the camouflage scheme of American pilot Richard Bong of the US Army Air Forces, who is the highest-scoring American pilot ace with 40 kill credits in a P-38.

The P-38J is a sleekly designed, twin-engine monoplane by Lockheed. This plane has a top speed of 431 Mph (694 kph) with an airspeed warning at 460 Mph (740 kph). The array of weaponry it has installed is: 1 x AN/M2 20 mm cannon with 4 x 12.7 mm Browning machine guns. Further-expanding the role, with upgrades, it can be equipped with either: bazooka's or bombs to further allow it to conquer and dominate the battlefield, whether that be air or ground.

Bong's P-38J-15 can be outfitted with the following ordinance:

When playing the P-38J climb to a high altitude, search for the enemy, locate the enemy you feel confident in engaging. Once these steps have been, ticked-off the check-list. Assuming you are above the enemy target: Put the plane into a gradual descent, which gives you and allows you to maintain the speed advantage. As you are descending; make small corrections on your path, so you don't give the element surprise away by overshooting the enemy. Now you are about one to two seconds away, from your target. Line your sights up, with your sights on the tail and fire a bust with your cannon and machine guns. You have now shot down your target. Why keeping the momentum, climb back up to the height you where before and repeat for the best results.

Ground Battles
Using this plane in ground battles, is very effective once you have unlocked the appropriate modules. FMBC Mk.1 allows you to equip two x 500 lb bombs, these are mounted under the wings. To help get the bombs on target, use the machine guns to help predict where the bomb will fall. To do this, put the plane into a steep dive. As you near the ground and start getting closer, fire the machine guns. Using a short bust, if the bust hits the area or target you are aiming for; drop the bombs then pull up.

They are great for destroying, tanks, bunkers and ships. M10 Bazooka module allows you to equip your P-38J with two bazooka's each bazooka has three rockets in total you get six rockets. These are attached to the lower nose panel, and are very accurate. These are ideal for destroying tanks and bunkers.

Once the ground units have been destroyed, you can use this to plane dominate the air and keep the enemy bomber and fighters away. This will help you secure that much wanted victory!

The P-38 performed very well in the Pacific and European theatres during World War II. They were used in roles such as bombers escorts, escort V.I.P's, performing reconnaissance over enemy locations, combat air patrols, ground attack, search and rescue and other important and critical roles.

Unfortunately, it is estimated that only five P-38J's survive to this day and of these, only two of them are still airworthy.