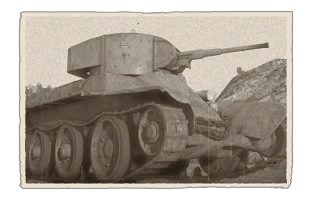 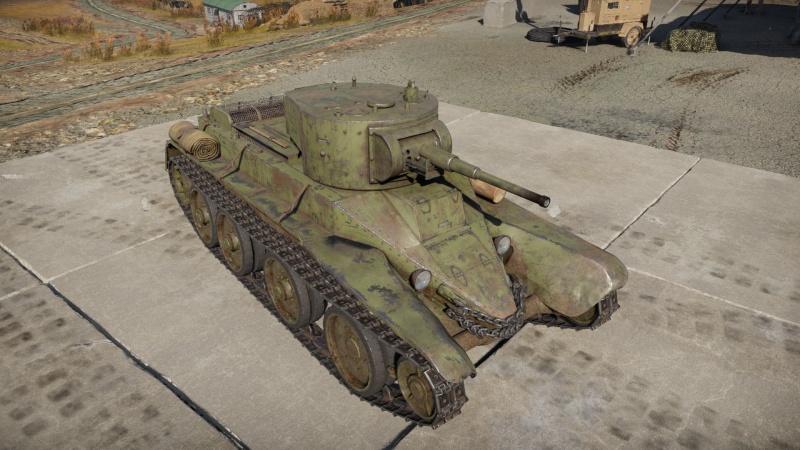 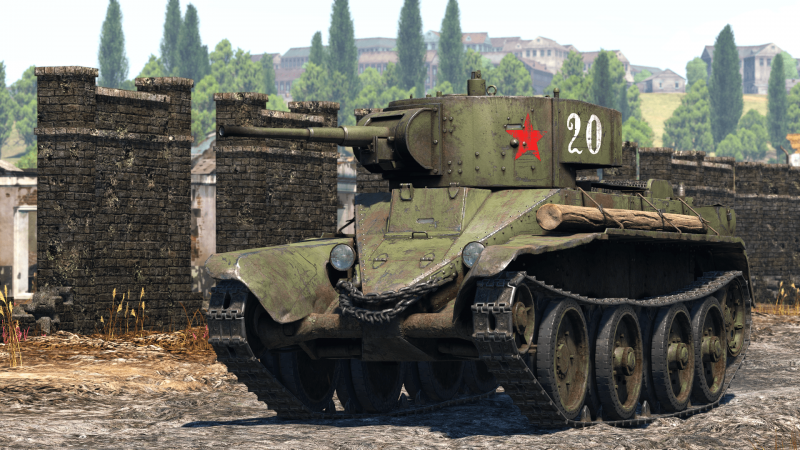 Fitting to its designation of "fast tank", it has virtually no armour, weighs only 11.5 tons and has a massive 400 HP engine (442 HP fully upgraded), giving it a massive 38 HP/tons ratio. This paired with excellent Christie suspension allows it to drive like a race car among tanks. The gun is a strong 45 mm 20-K cannon with decent penetration, good damage, and a quick reload. This makes the BT-5 an ideal flanker. The safest tactic would be to shoot and scoot, never staying in the same place for long. But a more aggressive and exciting approach is to run rings around the enemy and take shots while circling them. Overall, the rule with the BT-5 is to shoot the enemy first; if they try to shoot, don't get hit.

The BT-5 has a poor survivability: its armour is almost non-existent on all sides, making it vulnerable to autocannons (Pz.II, Flakpanzer I, etc.) and heavy machine guns like .50 cal HMGs found on American vehicles. Moreover, the crew is tightly packed, making it easy to knock out the BT-5 with a single shot by taking out all three crewmen at once.

The BT-5 has a decent cannon for a light tank. Stock round has a maximum penetration of 70 mm. Combined with the 29 g TNT, it is almost certain that the BT-5 will frontally knock out every tank it will see. Even at more than 500 m away from the target, it still has 40-50 mm of penetration which is still enough to go through a lot of tanks' frontal armour. The 3-4 second reload allows the player to quickly fire more shells if the first shot didn't kill. The tank has 8 degrees of gun depression which is enough for most terrain.

The BT-5 is really flexible when it comes to usage, as it has great mobility and firepower, which is pretty much all you need for a good tank. Given its great 53 km/h top speed, it is good to use the BT-5 as a point-capturing tank at the start of the match. It is better to travel on-road to fully utilise its speed to get to the point before the enemies do. Another good tactic is to manoeuvre to the flank of the frontline/point and attack from the side. Its speed makes it possible to go the furthest in the shortest time, surprising the enemies.

Once captured, the player can either quickly set an ambush behind nearby cover waiting for the enemy to recapture it, or just drive around the battlefield and help teammates. Its 70 mm penetration and 29 g TNT APHEBC shell will one-shot pretty much anything around its BR. If not, the 3 second reload allows it to finish them off easily. A sudden, close encounter is a hard test to the player's skills because the BT-5 isn't very good at turning as its tracks are quite long and narrow. Its turret traverse of around 11 deg/sec is certainly not the best. Thus those two factors can sometimes cause the death of the BT-5 so the player must respond fast and accurate.

The BT, or Bystrokhodny tank ("Fast tank"), was a strange combination of national engineering. Its origin lies with the American automotive designer Walter Christie, who developed a suspension system that can be converted between tracked and wheeled travel. His first attempt was the M1919 tank submitted to the US army in February 1921, but was withdrawn for improvements in Spring 1921. It was rebuilt as the M1921 and tested until May 1923. While his design had garnered interest, the deficiency of the cramped crew compartment and unreliable had the design rejected in July 1924. Christie improved the suspension again and patented the design in April 1928. The new suspension used large road wheels with a smaller idler and drive sprocket, with a chain to drive the vehicle track-less when needed. The suspension wheels were supported by large springs in the hull to provide a relatively smooth ride compared to the usual suspension design of the day. This design, today is known as the Christie Suspension, was put onto the M1928 tank and presented on October 1928, with a public demonstration by driving the tank from Maryland to Pennsylvania on an average 28 mph speed. The attention grabbed overseas interest, one was the Polish Army, but another country interested in the design was the Soviet Union. The Soviet Union, using its ties with Amtorg Corporation in New York, offered to buy the M1928 design and its license production rights. The deal was done on 30 April 1930 with two M1928 tanks for $60,000 and the production rights for $100,000.[1]

The tanks that arrived at the Soviet Union were designated the M1940 convertible tank. Polish interest in the vehicle vanished upon learning of the transaction with the Soviet Union. However, while the Soviet Union was aware of Polish interest in the vehicle, they did not hear of the cancellation and made estimations that Poland could have up to 100 Christie tanks with 300 Vickers tanks by 1931, prompting a hasty production schedule of their own tank designs. Though with flaws, the M1940 was accepted for production on 23 May 1931 as the BT-2. Manufacturing difficulties led to a delay in the production tables of the BT-2. Another issue was the choice of armament, with the Red Army jumping from the 37 mm PS-2 gun derived from the French Hotchkiss gun, the 37 mm Pak36 developed by Germany, then the 45 mm. The changes in armament, each larger than the other, created fitting issues with the BT-2 turret design. Despite 620 units produced by 1944, the BT-2 was deemed near useless except for practice.[1] An improvement was needed for the service of the Red Army.

The BT-2 design was improved at the KB-T2K tank bureau, with BT-3 being a measurement conversion from imperial to metric, and the BT-4 changing the rivet construction with welds. In 1932, the plan was to upgrade the BT-2 and equip it with 45 mm. The next iteration, the BT-5, was completed on 21 October 1932 without a turret, though with the complete model made on 01 January 1933. The most notable change between the BT-2 design and the BT-5 was the enlarged turret for the 45 mm gun with a coaxial machine gun. Most BT-5 were equipped with the M-5 Liberty gasoline engine, but some were equipped with a BD-2 diesel engine designated the BT-5diz.[2]

Perhaps the most important impact of the BT light tanks series was that it was the predecessor of the T-34 medium tank[3], which would go on as the most-produced tank of World War II. During work on improving the BT design that would become the BT-7, a separate design project at Kharkov headed by a designer named Mikhail Koshkin in October 1937 focused on a BT-20,[3] which had a wider hull and a BD-2 diesel engine. Inside the design bureau, however, the design was renamed the A-20, which was further improved into the A-32 which had improved armour and a bigger 76.2 mm gun. Finally, in December 1939, Stalin approved the A-32 design, which was accepted under the name T-34[9]