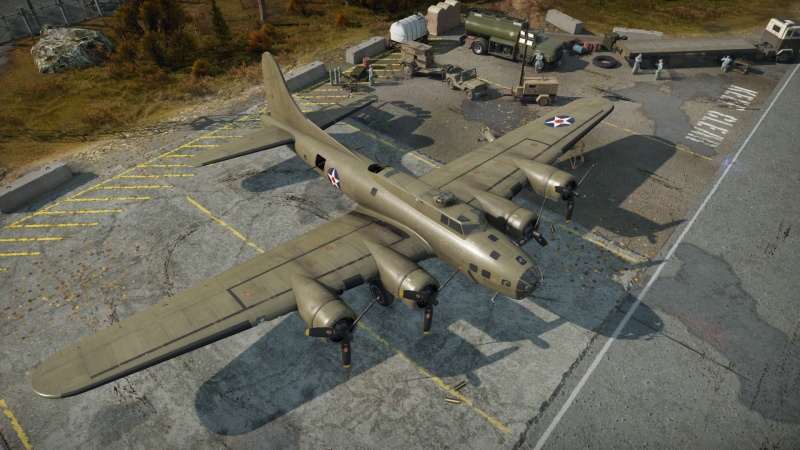 As a slow and lumbering heavy bomber, the Flying Fortress relies entirely on its turrets for defence. Without it, the plane is a piñata. Thus, "Protective vests" should be the first unlock. Further survivability upgrades will make fending off attacks easier but do not think to stand successfully against enemy fighters. So upgrading the bomb load should be second priority. Performance modules can be considered least necessary, it will not go anywhere quick anyway.

The B-17E can be outfitted with the following ordnance:

The B-17E Flying Fortress is intended to be used as a high-altitude level bomber in order to target airfields, bases, and land fortifications. Despite its large bomb load, it's not recommended to target moving ground units, such as tanks or armoured cars, especially when they are travelling in tight columns due to the inaccuracy of your bombs at high altitudes and the ability for the AI on the ground to perform evasive manoeuvres when bombs are falling onto their position. When using the B-17E, it is best to fly with another friendly bomber or fighter (if possible) to ensure maximum protection. If you are flying alone, side climb then fly along the edge of the map to the enemy base. NEVER fly directly toward the enemy base; interceptors will trace your path and shoot you down.

The B-17E is designed specifically to withstand the harshest punishment during combat. The bomber itself provides plenty of armour along the fuselage and tail except for the nose, which is the only area that's not protected by any form of protection. The armour ranges from 6.35 mm sheets to a single 38 mm glass plate protecting the tail gunner. Speaking of armour protection, in order to ensure the greatest chance of survival during an interception, you must not move. The B-17E is not designed to execute sharp defensive manoeuvres (turns, dives, and rolls) unlike its predecessor the B-25, but rather designed to use its defensive armament provided (consisting of 12.7 mm and 7.62 mm turrets) to fight back against harassing enemy fighters. Some great advice for novice bombardiers is to include incendiary ammunition in your turret belts. This crucial precaution will guarantee more lethal firepower coming from your defensive armament, since not only are you penetrating armour, but you are also setting components ablaze. However, the armour and defensive armaments typically won't save you from the high tier interceptors and cannon-armed fighters (especially german heavy fighters/interceptors that are armed with 30 mm cannons and get air spawns) you will face. Since they are all heavily armoured, while possessing the ability to rip your wings off with a few 20 mm cannon shots or one shot you with the 30 mm from 1.5 km away, it is better to just avoid them all together by side climbing and using cloud cover when heading to the enemy base. NEVER head straight to the enemy base because the enemy player will trace your flight path from your spawn point to their base and easily intercept you. Also unlike the B-25, the B-17 does not have particularly effective armour or defensive armament in the front, so if an enemy fighter decides to go head on, try turning away to expose your tail, which is a lot more protected against the incoming fighter. If not then both pilots could get knocked out and send you straight back to the hanger.

In conclusion, the B-17E is a great introduction for players using the American bomber line. Although it is not the "immortal gunship" B-17 of old, if used well, the B-17E is a force be reckoned with.

The Shooting Range #222 - Pages of History section at 03:55 discusses air combats between the B-17E and H6Ks in the Pacific.