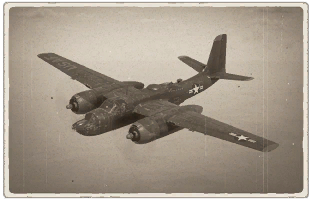 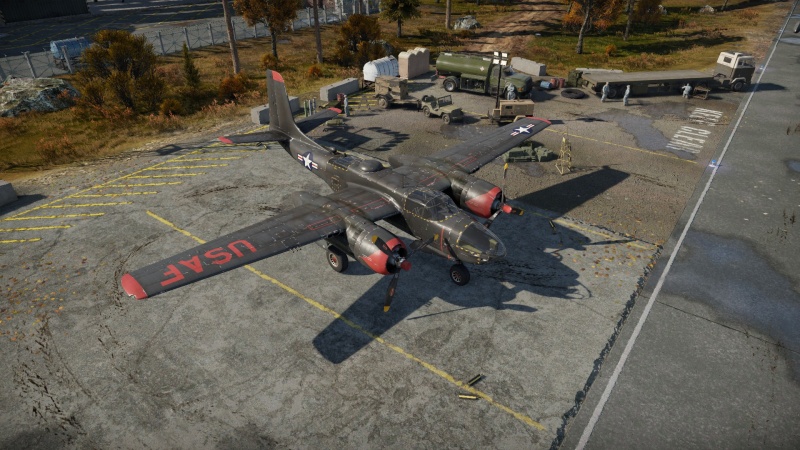 The A-26C-45DT is a premium gift rank IV American bomber with a battle rating of 5.3 (AB/RB) and 5.7 (SB). It has been in the game since the start of the Open Beta Test prior to Update 1.27. It is exclusively available on PS4 and can be obtained by purchasing a special pack.

With speed, manoeuvrability and large hitting power, the A-26 should not be taken lightly. Although players may find the battle rating too high, this isn't the case- in fact, it may be about right. The plane has a cruise speed which all the piston engine bombers dream of and is currently unmatched in the game. Reaching a maximum speed of 568.8 km/h the Invader is faster than the comparable Tu-2 by a significant 202 km/h. This speed allows the A-26 to strike targets deep in enemy territory and early on better than any other aircraft (excluding the jet aircraft). It also has a 4,000 lb payload with a variety of load-out options, making it very versatile in its role, allowing it to attack many different targets with great efficiency. To add to this, it has 8 x Browning M2 .50 cal machine guns to attack soft targets and the unfortunate jet if you have the chance. Unlike the Mosquito, the A-26 has defensive gunner turrets and decent ones at that. With two twin M2 machine gun remote turrets it allows for the very accurate and deadly fire.

The A-26C-45DT can be outfitted with the following ordnance:

In Naval battles, the A-26 is very adaptable to any situation that may arise and can perform low, medium, and high level bombing. With the 2,000 lb bombs, almost all large ships, except for a few battleships, will be destroy with the 2 x 2,000 lb bombs.

Carriers can be knocked out however accuracy is needed. Firstly take note of there the island is (the tower) while from a safe distance. Then manoeuvre in to a path that will be adjacent to the carrier and with the island facing you. Release two 1,000 lb bombs into the island and it should destroy the carrier.

The ХА-26 prototype made its first flight on July 10, 1942. Mass production began in September 1943. Parallel production lines started in Douglas, Long Beach (code DL) making the solid nose A-26B, and Douglas, Tulsa (code DT) making the bombardier nose A-26C (but both could be easily swapped in less than an hour). A total of 2,503 were built.

The camouflage and markings are similar to the one worn by the 17th Bomber Wing squadrons in 1953 (which was under other OrBat before then). It is painted gloss black for night missions, with a large "USAF" and red striped roundel proclaim the independence of the USAF from the Army, which happened in 1947.