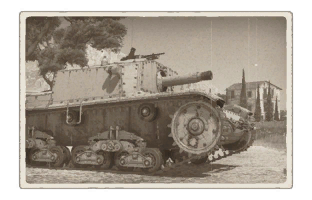 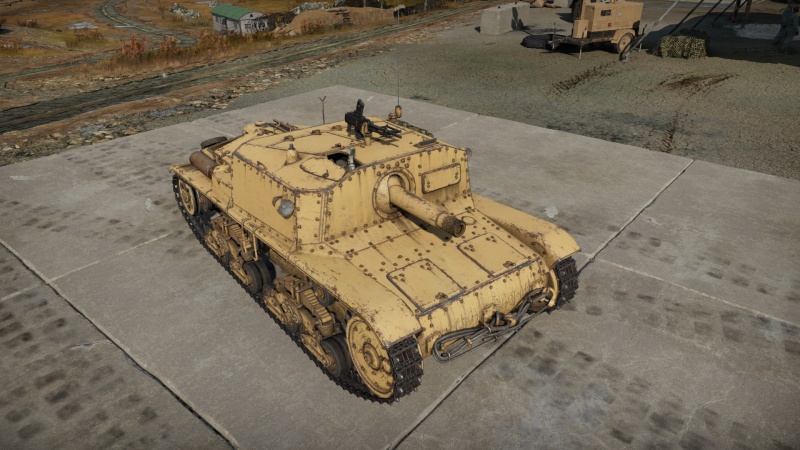 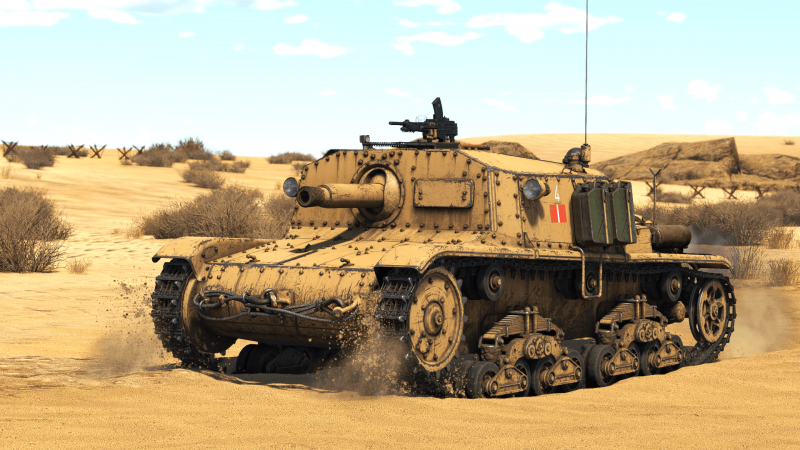 The Semovente 75/18 offers little in the way of effective protection, with its primary defence against enemy tanks being its small frontal profile. the 50 mm frontal plate struggles to keep out even rank 1 British and US guns at close range, while the extremely cramped interior means that penetrations will often knock out multiple crew members or modules in a single shot. Any shot to the sides will most likely be an instant knock out.

Unlike many of its low-rank open-top contemporaries, the 75/18 M41's fully-enclosed design offers protection against small-calibre machine gun fire and against artillery blast and HE shells. However, it still is very vulnerable to strafing aircraft and heavy calibre MG fire.

The 75/18 M41 is reasonably mobile for a low-rank tank destroyer, hitting around 30km/h on flat ground off-road with a fairly fast hull traverse and a poor reverse speed. 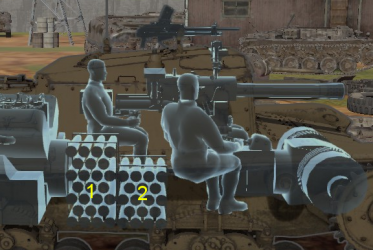 The small calibre of the Breda Mod. 38 machine gun makes it largely ineffective against all armoured vehicles but the ones with an open compartment. It still can be used to ping targets as a rangefinding help or to mow down minor obstacles blocking your line of sight. Furthermore, its limited elevation and traverse does not allow to target low-flying aircraft or flanking enemies. The clip capacity of the machine gun is poor, as it relies on a magazine of 24 bullets instead of a belt like similar machine guns from other nations.

The Semovente will struggle to be effective with the extremely poor penetration of its APCBC rounds. With a max penetration of barely 50 mm at point-blank range, the vehicle will have problems penetrating the angled front armour of many similar rank vehicles. Light tanks, armoured cars and SPAA are the easiest targets. In a full uptier, the Semovente will struggle to do any damage at all with stock shells. In this case, it is best for drivers to attempt to flank and shoot enemies from the side, where the powerful explosive capacity of the APCBC shells offer excellent single-shot knock-out capability.

The vehicle's effectiveness improves massively once the HEAT shell is unlocked, with 100 mm of penetration at all ranges. This allows for reliable penetration of practically all the 75/18 M41's potential adversaries. Your most dangerous opponents are fast and agile light tanks such as the M22 that can easily flank the Semovente undetected and disable you from close range. Their speed and small size make those light tanks difficult target for the Semovente's low-velocity howitzer.

With the HEAT shell, the Semovente can make for an effective tank destroyer, provided you stay at a distance guaranteeing your survivability. The one thing to remember about the HEAT shell is that it sacrifices the one-shot capability of APCBC, meaning that larger tanks will often take multiple hits to disable while the reload time is slow for the battle rating. Furthermore, its low velocity makes it difficult to hit reliably targets at long range.

The Semovente 75/18 was originally intended to be a self-propelled gun rather than a tank destroyer, with the War Thunder version being the later-model improved variant built upon the M41 tank chassis with improved armour.

In response to the poor effectiveness of existing Italian tank destroyer designs such as the 47/32 L40, the Semovente was pressed into service to combat US-built M3 Lee and Stuart tanks in service with the British Army in North Africa. Utilising a HEAT shell, the Semovente proved to be an effective counter to early-war British tanks, with its small size making it ideal for dug-in defensive positions where its lack of speed wasn't an issue.

In one engagement in 1942, Semovente vehicles of the Ariete Division repelled an attack from 40 British light and medium tanks, destroying 20 with no losses of their own. While the Semovente's HEAT shell proved effective against early-war tank designs, tougher Allied tanks such as the M4 Sherman represented a new challenge. This, as well as the Semovente's cramped interior, low-velocity gun and under-powered engine lead to the development of larger and faster dedicated tank destroyer designs with superior firepower.

Approximately 60 were built on the M40 tank chassis in early 1941, with another 162 built after that date on the M41 chassis. Two self-propelled gun (Semovente) battalions were assigned to the artillery regiment of each armoured division, each containing 2-3 batteries of 4-6 AFV each. Approximately 250 more were built on the M42 chassis, also used by the M15/42 tank, starting in early 1943, which continued to use the 75/18 howitzer as the previous models because the planned gun for the M42 variant was not yet in service. At the time the plan was for the Italian medium tank battalions to change from three companies of tanks, to one of tanks and two of assault guns. In September, 1943, some 75/18s saw action against German forces. 178 were confiscated or built in occupied Italy by Germany after the Italian surrender, and used in Italy and the Balkans.