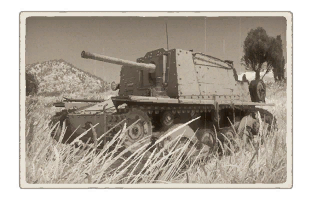 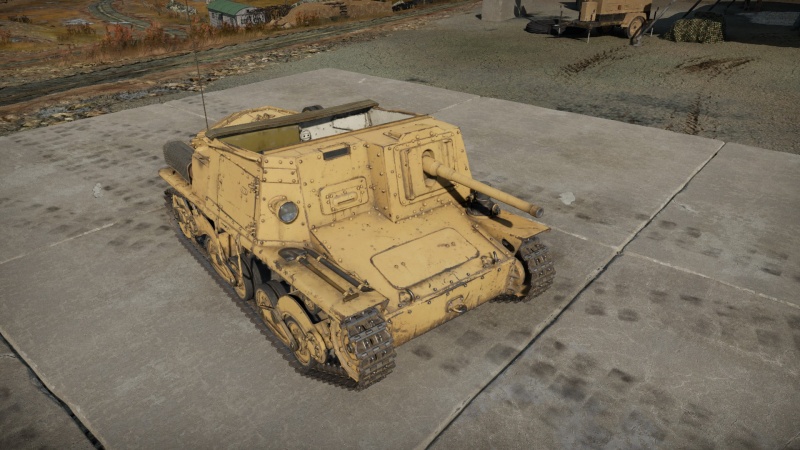 The 47/32 L40 isn't the most impressive vehicle when it comes to survivability, the frontal casemate armour is 30 mm thick, with the area around the gun shield being around 75 mm thick. In reality though, the majority of shots will be hitting the flat section of armour around the drivers port, which is vulnerable to everything apart from heavy machine guns; and if a shot penetrates this area it's likely the tank will be knocked out.

The crew is made up of 3 members: the driver, the gunner and the commander positioned directly behind the driver. Both crew members will likely be knocked out if a shot enters through the drivers side. It is possible to angle the gun shield towards an attacking enemy to try and soak a shot into the shield as most tanks around this BR lack the penetration required to punch through it, this can protect against some incoming shots, but it isn't not constantly viable. Additionally, as this tank is open topped it is vulnerable to every enemy aircraft with armament, so consider hiding and avoiding open areas of the map if a hostile aircraft is flying around.

The 47/32 L40 is fairly average mobility wise. It can cruise at 46 / 31 km/h off road (AB/RB), which isn't really that impressive when compared to its contemporaries. It isn't slow to the point where its comparative lack of speed is a detriment to the vehicle, but it just isn't fast enough to excel in terms of mobility. It does struggle when climbing inclines in the terrain though due to the low horsepower. It can reverse at a speed of -7 km/h however which is fairly useful. Its reactive mobility as well is functional, this tank can turn and adjust itself fairly easily to combat enemies approaching from different angles.

The 47/32 is equipped with the same 47 mm gun found on the M13 and M14 Medium tanks. Its performance in terms of penetration and damage potential is fairly good, and can comfortably deal with most vehicles around its Battle Rating. Its main drawback in terms of firepower however is the reload, at 7.8 seconds stock, which is one of the longest reloads at the tier, meaning a lot of enemy vehicles can likely fire two shots in the time it takes for this tank to reload, which combined with its poor survivability makes its reload time a huge drawback. An advantage this tank has though is gun depression, the cannon can depress to -12 degrees which is fairly impressive and allows this tank to utilise ridge lines and hills more effectively than other vehicles.

This cannon comes with three rounds:

Overall the unlockable APBC round has the most functionality, it carries the most penetration over ranges and over angled armour as well, it isn't a huge step up from the stock APHE round, but it is slightly more reliable overall. 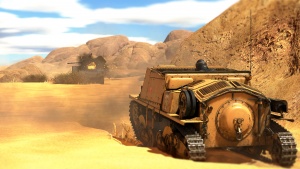 Due to its various drawbacks the 47/32 L40 is almost constantly vulnerable, lacking the mobility and armour to keep itself in the fight. These shortcomings make this vehicle more suited to a defensive role where its drawbacks can be somewhat negated. Like the previous vehicle in the line, the M11/39- this tank works well in ambush, engaging enemies from a static position. Unlike the M11/39 however, this tank can engage at range fairly effectively, as the 47mm cannon will still be able to deal with most common tanks around this battle rating.

As this vehicle is so small, it becomes a fairly hard target to hit at range, and as most low tier cannons aren't very accurate, it's likely an enemy will take some time to range in their fire accurately and hit you. Additionally, due to the gun depression this tank can make use of a lot of different areas of the map, utilising ridge-lines and hills more effectively than most other tanks, this means it can be played to decent effect anywhere, as its ability to fire on enemies isn't limited by the terrain, but as it has no turret and is overall fairly weak, avoid pushing too far into the map as this tank can't survive a lot of fire or a shot into the side; a sniping spot at range or a camping spot at close range will be ideal.

Another tactic to make use of is angling, if you're taking fire and need to retreat, try angling the side of the tank with the gun shield towards the enemy, as it's likely the incoming rounds will strike the shield leading to a non-pen, allowing you more time to get away or return fire, although ideally you don't want to be shot at at all. Also, try to avoid driving out in the open, as you're very vulnerable here, in general it's best to avoid commonly travelled routes in the map, as if you meet an enemy on the move, it's likely they will get a shot off on you before you can land a shot on them, due to how unstable this cannon is when coming to a stop. Try to stick with you're team if you want to play a bit more aggressively, as you don't have enough offensive advantages to reliably beat enemy tanks one on one, you'll need to already be in an advantageous position when you meet an enemy to get the most reliable results, i.e camping a corner or sniping.

The Semovente (sometimes abbreviated "SMV") 47/32 was derived from the L6/40 light tank in order to act as a mobile version of Italy's standard anti-tank gun, the Boehler M1935 or Cannone da 47/32, also used in the M13/40 and M14/41 medium tanks. It was intended to act as a tank destroyer in dedicated battalions , but in practice was generally used instead as infantry support because its anti-tank performance was so mediocre. A squadron of nine was authorised for the RECo (Raggruppamento Esplorante Corazzato; armoured reconnaissance task force) of an armoured or motorised division. A four-vehicle element was also authorised for the NEC (Nucleo Esplorante Celere; fast recon group) of the 1943-type infantry division, at least on paper. From March of 1942 it saw action in Russia with the 13th Semoventi Battalion, part of the 3rd Celere (Cavalry) Division, destroyed in the Don River fighting at the end of that year. 47/32s also were employed in Tunisia, Sicily and Italy.

Around 300 were built. After the 1943 armistice, 78 were confiscated by Germany, who gave most of them to Italian forces or Croatia.