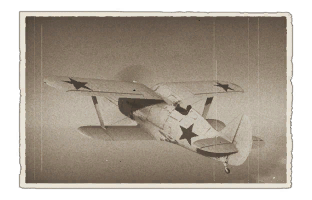 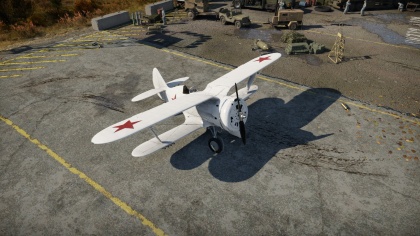 Zhukovsky's I-153-M62 is a premium Rank I Soviet biplane with a battle rating of 1.7 (AB) and 2.0 (RB/SB). It was introduced in Update 1.31. It costs 250 Golden Eagles. The plane is painted after the camouflage scheme of Soviet pilot Sergey Y. Zhukovsky in the 127th Fighter Aviation Regiment of the Soviet Air Forces.

The I-153-M62 handles like a dream, outperforming most fighters at its BR. It accelerates fast and has a good max speed. The Chaika possesses a good turn radius, good climb rate and good acceleration at low altitudes. To fly this plane, you should climb to medium altitudes after taking off (2,000 - 3,000 meters) then accelerate to prepare for hot pursuit against enemy fighters and bombers. The plane's massive flaws are its low top speed for its BR and weak airframe.

As described earlier, climbing at an aggressive rate during the beginning of the game is extremely beneficial. Once at bomber altitude, building up speed is a must as the biplane bleeds speed in high altitude turns. However, once this is achieved, the plane has free reign overruling the sky. Play mainly as an interceptor and air-defence fighter and watch as the enemy plummets towards the ground.

Many aircraft will attempt to Boom & Zoom you if you remain at low altitudes. Should this happen, engage as though you were going to head-on and break off at the last moment. By swinging around, you'll be able to catch them as they pull up and destroy them.

Realistic Battles: Start out by climbing to ~2000m and then gaining airspeed. You then react to the most immanent/dangerous threats, either diving on lower flying planes or attackers, or going a bit higher up to get a bomber kill, or in general, luring people into turnfights.

Mixed Battles/CAS: Surprisingly, this small biplane is quite deadly as a CAS aircraft. It can carry 4x50kg bombs, which can still be relatively effective at 2.0, or the lethal RBS-82 rockets, 4 on each wing. These effectively function as APHE, as they deal little to no damage if a direct hit does not occur. If it does, however, it will instantly destroy the tank with a single hit. Therefore, if you are comfortable with your aim, you can destroy up to 4 targets per sortie, and a few more with some strafing. Due to its low stall speed and incredible maneuverability, the I-153 can easily be pulled out of a dive at very low altitude. SPAA are a considerable threat however, as the Chaika isn't exactly a hard target to hit if the pilot is unaware of their surroundings. The biggest threats are the M16 MGMC and Flakpanzer 38 due to their high rate of fire. The P.7.T AA is also a rare, yet deadly occurrence.

The I-153 can be used in turnfighting, bomber intercepting and ground pounding. Like in AB and RB, it is excellent in turning tightly and continuously, and it has lovely low-speed handling and low stall speeds (unlike its successor I-16), making it a great starter plane for sim. However it does have its drawbacks: the rather big nose blocks the visibility a lot, offering very poor over-the-nose visibility which is a disadvantage in a turn fight, because when leading a shot the enemy will always get obstructed by the engine, making the player guess the shot. Also its upper wings will get in the way when you look aside.

Before engaging a fight, it is better to have an altitude advantage first. When approaching the fight try to figure out which is your teammate and which is the enemy, to avoid going for a second pass, as the energy retention of the I-153 is rather slow. Also pick your target carefully. For easier aiming, you want to go for those unmaneuverble twin engine aircraft like Ju 88 or Ki-45, or bombers if there are any. Given the bad forward visibility of the I-153, these are the best options as they are quite slow and sluggish, and are a bigger target to hit. However getting hits on them doesn't mean good damage, so you must be patient. When dealing with fighters, it is way harder to aim. The elevator control of the I-153 is extremely sensitive, giving it good maneuverability, but at the same time, bad handling. The I-153 will respond in a very fast turn upon moving your stick / mouse by a little bit, which makes tracking nimble planes quite hard. But once you get used to it, try to lure every enemy into a turnfight, as that is where the I-153 shines. Quite a bit of bullets are required to effectively damage the enemy so you must be patient. If you find an enemy at your 6, utilise your great roll rate to do defensive maneuvers like scissors to make them overshoot. Or you can simply do tight turns, most monoplanes won't be able to cut inside your turn and they might disengage.

If you are not very experienced in sim, you can also go for even bigger targets (bombers) for easier aiming. However you want to be more careful when hunting bombers, since with the Sim control (whether it be mouse joystick or a real stick) the plane will maneuver much more gently, making itself a great target for the bomber's gunners. DO NOT follow behind a bomber's 6 unless you are sure that its tail gunners are unconscious. Chasing behind a bomber makes yourself stationary for the tail gunners, and you will be showered with bullets. Your big radial engine will usually get damaged. Instead, before attacking, get an altitude advantage over the bomber by flying around 2 km above it. The bomber should only fill up about 1/6 of your gunsight. The best position for an attack is at the bomber's high 6 so you can adjust the lead much easier. Dive at the bomber, but not directly at it, try to predict where you two will crash by imagining yourself as a missile, that's where you should aim at (deflection shooting). To maximise the damage it is better to aim for their wings and engines, as the fuselage usually soaks up quite some bullets. Only fire when the bomber passes in front of your guns. This short window might seem inadequate to do anything, but with a accurate burst on the engine the 4 MG can at least damage it. With an engine damaged most bombers cannot go far.

Ground pounding ability is average as there is only light bombs and rockets. The 8 rockets, with accurate aiming, can destroy 4 targets, whether them be tanks or pillboxes. The small 50kg bombs can be used on light pillboxes. Once the suspended armaments are gone, the 4 MG are good for killing soft targets like trucks, artillery and AA cars.

This early twin engine plane always shows up as an AI controlled recon aircraft that you have to down, which is a good news as AI won't maneuver aggressively. However this plane is extremely durable for the I-153's weak MGs. When it shows up as an AI, deflection shots are not recommended as the small shooting windows really does nothing. Instead, try disabling its 2 gunners first, then just sit behind it and burst on its wings and engines. When attacking the gunners try to not get your engine damaged by pulling evasive maneuvers as soon as the bullets come close, since the Do 17 can outrun the I-153 in a level flight.

This bomber is not only quite durable, but also pretty fast. In level flight it can outrun the I-153 rather easily. Avoid being on its 6 as it will have at least 2x 7.92mm MG facing its tail, and their rapid firerate and good penetration is a big threat. Either go for a head-on or use deflection shooting and aim for its engines. If you cannot keep up with it, disengage. If it flies way higher than you, change your target.

"The Polikarpov I-153 ""Chaika"" (""Seagull"") was an advanced version of the I-15 fighter developed in 1932 (thus its designation, meaning ""I-15 Third Model""). The first aircraft of this type took off in August 1938, but it was only a year later that it was launched into full-scale production.

The prototype served as ""Black 69"" with the 127th Fighter Aviation Regiment of the Western Military District. This aircraft was piloted by Sergey Yakovlevich Zhukovsky, a Soviet ace who scored 13 planes destroyed and 15 shared destroyed.

By the start of the war, Zhukovsky was a Junior Lieutenant and a Flight Commander with the 127th Fighter Aviation Regiment at Grodno. On June 22, 1941, he took part in nine air duels and shot down five enemy aircraft (three of them while piloting ""Black 69""), and on June 29, he scored three more victories. He flew a total of over 500 sorties during the years of the war.