The 23 mm ZU-23 cannon is dual-mounted, and has a very high rate of fire, making it very effective against aircraft. The canon also has decent penetration, so it can take out tanks from the side, except from the most heavily-armoured ones.

In 1954, the Soviet Union's Chief Directorate of the Missile Troops and Artillery GAU issued an order to the design bureau TsKB-14 (located in Tula) to develop a new anti-aircraft weapon that was larger than the 14.5 mm caliber and more transportable than the 37 mm M1939 gun.[1] TsKB-14 designer Nikolay M. Afanasev, who was already working on upscaling his 12.7 mm A-12.7 aircraft machine gun to a 23 mm caliber, submitted his prototype weapon chambered in the 23x152 mmB cartridge used in the VYa cannon (the cartridge modified to use steel case with a sturdier extractor rim). The cannon design was accepted for Soviet service under the GRAU index number 2A14 and began production at plant No.535 in Tula.[1] 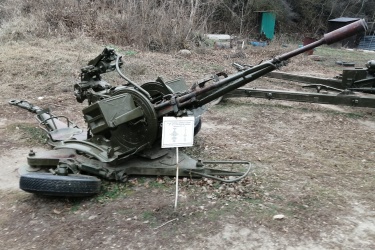 A ZU-23 anti-aircraft gun with its ZU-14 mount deployed.

The 2A14 cannon was envisioned to be used in single, twin, and quadruple-mount carriages. In February 1955, TsKB-14 designers E.K. Rachinskiy and R.Ya. Purtsen would produce the ZU-1 single mount and the ZU-14 twin-mount carriages for the 2A14, with evaluations for the designs held between April and September 1956. While the ZU-1 was eventually dropped due to its relatively high weight of 440 kg, the ZU-14 proved more successful at 950 kg fully loaded with the ability to transition from travel to combat configuration in up to 20 seconds (the weapon can still fire in the travel configuration). An automatic anti-aircraft sight ZAP-23 was also installed to help target aircraft flying up to 300 m/sec. Following troop trials in 1959, the ZU-14 was adopted in 1960 as the ZU-23 "Konkurent", with index number 2A13. A quadruple mount would also be developed from the 2A14; the gun was modified and was put in a self-propelled mount as the AZP-23.[1]

The ZU-23 saw prominent service in the Soviet infantry units, notably in the airborne as the weapon was light enough to be air-droppable and has similar anti-aircraft firepower to a ZSU-23-4 "Shilka".[2] A Soviet airborne division would have a battalion of 18 ZU-23s, splitting into batteries of six ZU-23s that are attached to an airborne brigade.[3] The ZU-23 can provide an effective anti-air range of 2,500 metres, fed by linked ammunition of 50 rounds from boxes attached to the outside of each cannon's trunnion. The ZU-23 also saw use in Soviet motorized rifle regiments that have not yet converted to missile and ZSU-23-4 air defense, and as close air defense for SA-4 brigades.[2][3]