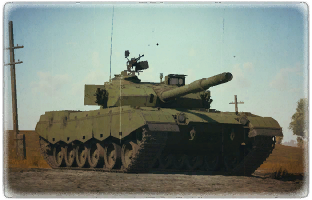 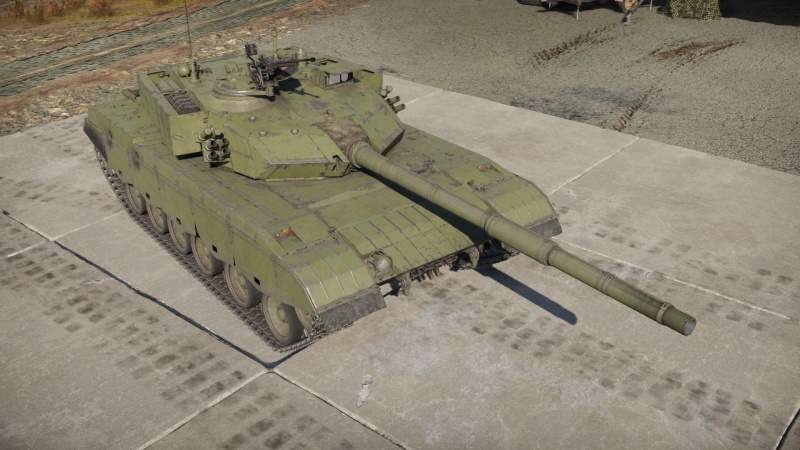 The design of the ZTZ96A's turret is a further drastic departure from previous the Chinese and Soviet dome turret design. It has an angular arrow shape design reminiscent of the German Leopard 2A5; however, the armour stops short at the coaxial gun port, providing a weak spot for the enemy to exploit. Shooting this area does not usually result in an instant knock-out as it will only disable the gun breech and take out the commander or gunner (depending on which side is shot). On the sides of the turret, a noticeable addition is a row of FY-4 ERA on the bustle rack. In-game, this additional armour doesn't yield much use as most of the time shots are not from the sides of the turret but rather on the side of the hull where the carousel style autoloader is a well known weak spot that will result in instant ammo explosion.

125 mm Type 88C cannon
Two-plane stabilizer
Reduces the swing of the gun in two planes while moving
Autoloader
Automatically feeds projectiles into the breech. The speed does not depend on the skills of the loader
Ammunition40 rounds
First-order22 rounds
Reload7.5 s
Vertical guidance-5° / 12°
Main article: Type 88C (125 mm)

The ZTZ96A makes up for its drawbacks in mobility with a superb gun. The 125 mm Type 88C smoothbore gun is capable of firing APFSDS, HE and HEAT-FS ammunition. For its battle rating, the 125-I shell performs very well, offering 466 mm of flat penetration at point-blank and dropping only to 434 mm at 2 kilometres. Its angled performance is exceptionally good at 269 mm at 60 degrees, outperforming even the best Soviet APFSDS round, 3BM42 whose angled penetration is only 248 mm. For reference, the 125-I performs comparably to Western long-rod sabot rounds such as DM33. The HEAT-FS round is nothing special with a standard 480 mm of penetration that is only really effective at destroying lightly armoured vehicles such as SPAA. The HE round is of the Soviet-style, packing a whopping 5.4 kg of TNT equivalent that can deal devastating damage against Western tanks' weak spots of the hull and turret roof and turret ring. It's recommended to entirely ditch the HEAT-FS for HE as it arguably performs better in the anti-tank role, ironically.

For players grinding the APFSDS in assault mode, it is recommended to bring full ammo, with around half HEAT and half HE. As the countdown goes at the start of the match, quickly find a spot where you will not get shot from every direction and stay there until you run out of ammo or get destroyed. The HEAT is great at one-shotting weakly armoured (relatively) cold war tanks, while the HE is capable of destroying those heavily protected top tier MBT. Given that you do not have APFSDS therefore lacking the ability to knock out some AI frontally, you will have to rely on assists to get scores. Firing HEAT / HE at tracks, roof mounted MG, turret ring, cannon barrel, etc can at least immobile / disarm the AI, granting you an assist. The 7.5 second reload will be quite slow when facing a huge wave of AI so you must aim each shot carefully, but other times it is generally fast enough. The ZTZ96's armour can take quite some beating but is also prone to ammo rack explosion, or penetrating shots from the lower front plate and gun mantlet.

Development of the ZTZ96A began in the early 2000s, once it became clear that the introduction of the ZTZ99 MBT would be delayed due to issues surrounding its development. As a result, Chinese engineers developed an improved version of the existing ZTZ96, in order to counter the threat of the most advanced fighting vehicles of other nations, such as the USA, Russia, Japan, Korea or India.

Two different prototypes were built as part of the development work, of which one was chosen for further development and eventually entered production as the ZTZ96A. With the ZTZ96A, Chinese engineers addressed two of the biggest shortcomings of the original ZTZ96 - mobility and protection - by installing additional ERA packages to the turret and hull front as well as fitting a more powerful engine.

The ZTZ96A was first revealed in 2006 and served as the basis for the development of more advanced versions of the vehicle. The ZTZ96A is still in service and makes for the most widely used main battle tank in service with the PLA today.