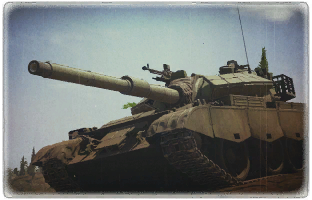 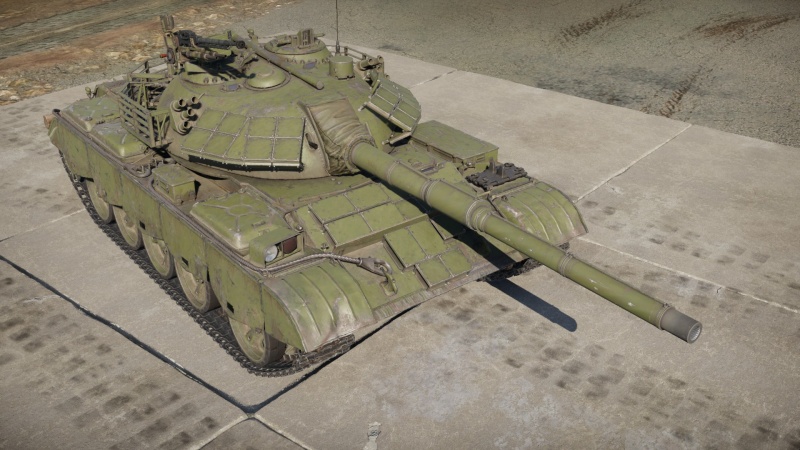 The ZTZ59D1 is a comprehensive upgrade of the venerable Type 59. It includes a large number of modern features on a old chassis, rather like an AK-47 decked out with modern furniture and accessories. The most noticeable difference at a first glance are the ERA arrays on the hull and turret cheeks. The original 100 mm Type 59 cannon has been replaced with a licensed copy of the ubiquitous Royal Ordinance L7 105 mm cannon, and the installation of thermal sights and a laser rangefinder give the tank impressive firepower. Unfortunately it still suffers from many of the Type 59's weaknesses, namely subpar mobility and gun handling. While it is not very suited to the high-speed combat common at its rank, a skilled and careful tanker can still enjoy it as a formidable sniper.

The ZTZ59D1 is succeeded by the ZTZ96, a significantly more modern design with better firepower, mobility, and protection.

The base armour of the ZTZ59D1 is exactly the same as the Type 59. The hull and turret armour are quite thick, but the original T-54 armour was designed to counter WWII-era German cannons, and at the ZTZ's rank it will not hold up against sabot or HEAT rounds. It is at least fairly auto-cannon proof from the front. The ERA arrays on the turret use ERA comparable to the Soviet Kontakt-1 and have good protection against chemical rounds; unfortunately they do not have very good coverage, and the area around the gun mantlet is heavily exposed.

There are also ERA arrays on the upper glacis with an interesting setup: two layers of ERA separated by an air gap. While the hull coverage is spotty due to the tow cable attachment points, the ERA setup boasts 120 mm of kinetic protection. This is not quite enough against the common 105 mm DM23 APFSDS considering that the ZTZ59D1 lacks composite armour to back the ERA up, but it will stop all 105 mm APDS rounds. Certain APFSDS rounds with especially poor angled penetration like the T-55A's 3BM25 and the T95E1's T320 will fail to penetrate even at point-blank range. The US 105 mm M735 and 152 mm XM578E1 will occasionally be blocked given some distance and angling. The hull ERA's chemical protection is not as strong as the turret ERA due to the less drastic sloping from the front profile and 120 mm HEAT-FS as fired by the Leopard A1A1 (L/44) will be able to penetrate.

Post-penetration survivability is not ideal. There is an ammo rack behind the fuel tank next to the driver, but unlike the comparable T-55AM-1, they are not "wet" and can be easily detonated by penetrating hits. Loose ammunition is stowed in various corners of the crew compartment. It is a good idea to minimize the number of rounds carried.

Speed is definitely not a strength for the ZTZ59D1. The original Type 59 was not a speedster to begin with and the upgrades on this tank add an extra ton of weight without any increase in engine power. It is also incapable of turning in place and has a poor reverse speed of only -7 km/h.

The Type 83 cannon is a Chinese produced version of the tried-and-true Royal Ordnance L7 gun used by numerous other contemporary tanks. Unfortunately, since it's mounted in the cramped confines of the Type 59 chassis, the reload speed is about 2 seconds slower than average. The ZTZ59D1 also does not have an upgraded turret drive and the turret rotation speed of at most 10 degrees per second is exceptionally bad for the battle rating. It at least has a two-plane stabilizer, which is a step up from the Type 59's vertical stabilizer.

The -4° gun depression might look too poor, but due to the low height of the vehicle it is actually enough for quite some not-so-hilly terrains. On gentle hills the ZTZ59D1 can peek over safely, exposing only the turret for hull down, for example in certain spots on Jungle and Frozen Pass. However, this gun depression is still not great in very hilly maps like Karelia, forcing the player to ditch the hull down tactic.

The ZTZ59D1's ammunition consists of the typical set for 105 mm guns. The stock Type 83-HEAT is a HEAT-FS round with 400 mm of penetration at any distance that struggles against enemies with ERA or composite armour. Use it as an interim round until APFSDS is unlocked, but keep a few afterwards since it can hull-break IFVs, light tanks, and SPAAs. The Type-83 HESH round causes a wide (but not very deep) cone of damage and practically ignores slopes, but only works against thinner plates of conventional armour and has poor ballistics. It may be helpful once in a while to finish off targets that only have a slight portion of their tank exposed, but for the most part it should be ignored. The Type-83 APDS is, despite its name, an APFSDS round with identical performance to the common 105 mm DM23 used by the Leopard A1A1 for example. It has decent performance overall and can dispatch targets with weaker forms of composite armour like the XM-1 (GM).

The ZTZ59D1 features two MGs: one roof-mounted 12.7 mm heavy MG, and a 7.62 mm coaxial MG. The 12.7 mm MG, with its maximum penetration of around 30 mm, can do quite well against lightly armoured vehicles such as the R3 T20 / T106 and the AUBL/74. It can also damage or even destroy the opponent's gun barrel or track with around 5 seconds of continuous fire. Against low-flying aircraft it can easily get you some critical hits with the correct lead. However its magazine empties very quickly and it does not carry enough ammo for prolonged MG fire comparing to the infamous M2HB.

The 7.62 mm, on the other hand, can only damage fully exposed crew which are not commonly seen at this BR, or clear up light obstacles. Its low penetration greatly limits its usage in battles.

The ZTZ59D1 might have a lot of modern features, but there is really no disguising the fact that it is a Type 59 at heart. The Type 59 at 8.0 already struggled with its poor gun handling and the ZTZ59D1's upgraded two-plane stabilizer is not much of a consolation considering that it will almost entirely face enemies with two-plane stabilizers and superior mobility. The ZTZ59D1 is best used as a support tank or sniper to take advantage of its good firepower and decent protection while minimizing the effects of its poor gun handling and mobility. Ideally one can stay behind the front lines, moving up when prudent, and allow other teammates to push forwards. Enemies that appear or reveal themselves can then be dispatched at a safe distance. However one must be on the lookout for flanking enemies, as the gun handling is not adequate for responding quickly to unexpected threats. For this reason close range brawling should also be avoided. The mobility is also quite poor for its rank and it pays to be vigilant when moving up to sniping positions - enemies may be already present.

A nice feature of the ZTZ59D1 is its access to thermal vision. While not of particularly high resolution, it helps with spotting targets significantly in both day and night battles and aids its sniping capabilities. However it is not the only tank with thermal vision at its rank, so this is not an absolute advantage. Situational awareness is very important on the ZTZ59D1 to compensate for its poor gun handling and reload, and certainly being able to spot and shoot enemies first is helpful. Make good use of the laser rangefinder as well.

The ZTZ59D1 has better protection than the average 8.7 MBT, but it is by no means immune or even consistently resistant to enemy fire. Poorly aimed 105 mm HEAT-FS can be resisted by the hull and turret ERA and very poorly aimed 105 mm APDS or weak APFSDS can be resisted by the hull ERA. The turret is vulnerable to any kind of kinetic round, though turret penetrations are less likely to knock out the tank in one hit. Count yourself lucky if you survive any form of incoming fire and treat it as a second chance.

Helicopters are a major threat to the ZTZ59D1. ATGMs will typically go right through its ERA and even helicopters with unguided rockets, which typically need to fly closer to the battlefield, are difficult to destroy given the ZTZ59D1's bad gun handling. Stay out of sight if possible and take advantage of the smoke grenades if caught in the open. Lightly armoured helicopters can be harassed with the heavy machine gun at closer distances.

The Type 59 tank was the primary tank of the People's Liberation Army in the Cold War era. While reliable, easy to manufacture, and available in large numbers, the design began to show its age as time went on. Improved derivatives like the Type 69 were not used extensively by the PLA. In the 1980s the large inventory of old Type 59s was in need of modernization, but defrosting relations with the Western world around that time allowed the purchase, use, and study of foreign technology, greatly aiding in the improvement of existing vehicles and development of future models. The first Type 59 model to benefit from these upgrades was the Type-59-II, which boasted a 105mm rifled gun based on the ubiquitous Royal Ordinance L7 and improved vision systems. The Type 59D1 variant was a further development, adding on modern computerized fire-control systems, passive night vision devices, an improved gun with thermal sleeve, and explosive reactive armour. Other variants of note include the similar Type 59D, which has a longer gun and support for gun-launched ATGMs, the Type 59G, an overhaul featuring a welded turret and 125mm gun similar to the modern Type 96, and the Jaguar, a joint Sino-American project with a heavily overhauled turret and hull.

The designation/acronym "ZTZ" is used at times by the Chinese military for its main battle tanks. In Mandarin, the first Z stands for "armoured vehicle" or "armour", the T stands for "tank", and second Z stands for "main battle". This term is generally used to describe modern Chinese MBTs, but for the most part it can be interchanged freely with "Type".