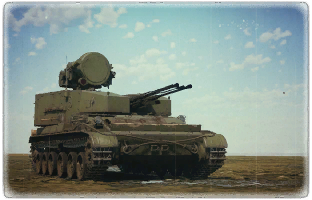 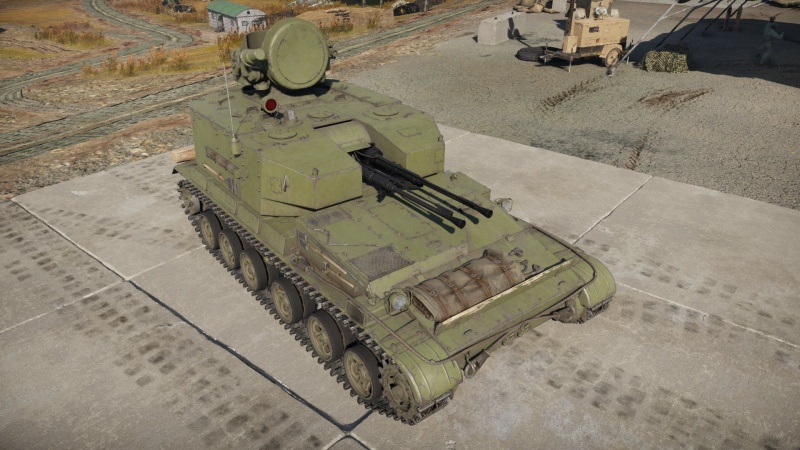 Sharing the same hull of the SU-100P, the hull is protected enough for heavy machine gun fire but lacks protection against everything else. However, the turret is barely armoured for low calibre machine gun fire (with only 8.9mm of thickness), it has little survivability against everything it will face and will be destroyed by overpressure with most CE ammunition (HE, ATGM, rockets, bombs, etc.)

Since it is mounted on the SU-100P chassis, it has good mobility with a top speed of 70 km/h on a flat road capable of getting you into good firing positons early-on in the battle. It does benefit from regenerative steering, reducing the speed loss when turning but not as much as with neutral steering. The reverse speed is good enough to enable you to disengage easily and play peek-a-boo with the enemy.

This tank has access to a double mount of Shipunov 2A11 37 mm autocannon, a very versatile weapon, considering its vertical guidance, traverse speed, and selection of ammo belts. It is similar to the one seen on the BMP-2. Due to being double mount, it has an RPM of 1,000. It is devastating against both aircraft and ground vehicles even with the standard AP round. It does not get access to APDS belts like on the 2A45 30 mm autocannon but the AP belts are more than enough to disable and destroy modules from all angles as well as destroy enemy tanks from the sides.

The ZSU-37-2 should be played entirely as an AA vehicle. Do not go tank hunting in this vehicle, as you do not have the armour. Focus on keeping the skies clear, something that this vehicle does very well. A high rate of fire and very fast turret traverse means that you should be able to target and destroy even the fastest jets.

You have a high ammo count with this vehicle, meaning that you can afford to find a good spot away from the main fight in order to pick off enemy planes. Unless you need to reload your ammo, avoid capture points. They are usually the hub of most of the fighting and going to them will put you in the firing line.

While it is fully enclosed, the ZSU-37-2 has armour which makes the M18 Hellcat look like a heavy tank. Even 7.62 mm machine guns stand a fair chance of penetrating this vehicle. This makes you a primary target for aircraft, which are usually armed with cannons or high penetration machine guns and will easily take you out.

The ZSU-37-2 was the long range counterpart of the ZSU-23-4, it entered development at the same time the ZSU-23-4 did and each one fullfilled different roles. It was developed by Uralmashzavod based on the SU-100P chassis designated Object 119. The ZSU-37-2 was meant to counter targets at 3km. A single prototype vehicle was built and was tested on December 1960, both ZSU-23-4 and ZSU-37-2 were accepted for service. It never saw service as the ZSU-23-4 was preferred as an SPAA