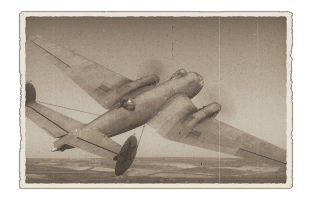 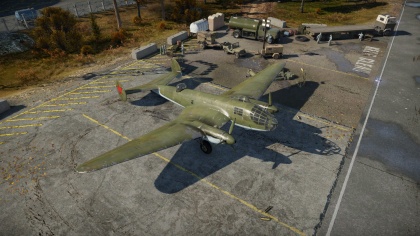 There is 8.5 mm of steel plate armor on the seat of the pilot, and 10 mm of steel armor for both gunners at the rear of the aircraft. The fuel tank is all around the plane so the chance of catching on fire is high. The pilot is rather hard to hit, considering its seated at an elevated position when compared to the rest of the crew, which the enemy fighters or interceptors might not be aiming for since the gunner are the most dangerous defensive armaments of the aircraft, an its not easy to aim for that extended cockpit.

The Yer-2 (M-105) is an impressive aircraft for it's time, considering the bomb-load makes up of 56% of its weight an it was able to, well, still fly! (although there was a crash of the prototype, which was designated Stal-7, during takeoff. This led to the arrest of the original designer before Yermolayev undertook the design.) In Arcade battles, the weight of the aircraft would't affect the gameplay too much. However, that's a different story for players who play this aircraft in Air RB. The weight of the bomb-load significantly affects the performance of the aircraft, making it a pain to fly to its destination because it has a subpar climb rate, and its painfully slow (stock: average of ~263km/h at 5,000 m). Luckily, this is a long range bomber, and this allows you to spawn at an altitude of 4,000 m. The player should not start diving immediately because the slow speed and the lack of defensive armaments on the aircraft makes this aircraft an easy target for enemy fighters, especially for those with 8 x .50 cal machine guns. As a long range bomber, your best ally would be altitude. The higher you are, the more chance you have at surviving (Enemy aircrafts would usually leave you alone when you're at 5,000 m). Avoid flying into the middle of the battlefield to prevent dropping your K/D ratio. Try taking routes around the map and far from the battle because it won't be long before 4 fighters aircrafts start appearing at your rear. If an enemy does appear at your six, drop your bomb-load immediately at the target and return to base. If you weren't able to do so, return to the base whatsoever. Start diving to the direction of the airbase, this will increase the effectiveness of putting out a fire, and pray that you're able to take him done before the enemy does that to you.