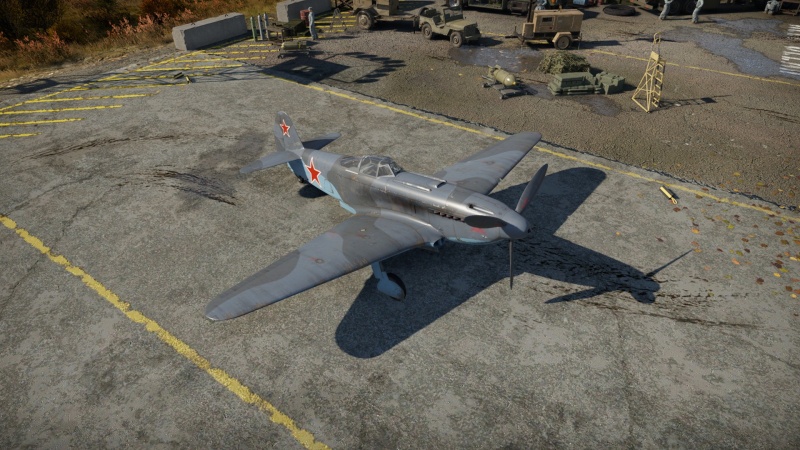 The Yak-9UT doesn't have any the ability to carry bombs, however, it does have access to other gun configuration options many other aircraft do not have. By default, you have twin B-20S 20 mm cannons mounted on the top of the nose cowling and a single 23 mm cannon mounted in the propeller shaft, you have also access to the twin B-20S and an N-37 37 mm cannon with higher damage but less ammo and fire rate. Finally, the last gun setting, a single B-20S and an N-45 45 mm cannon with only HEFI-T rounds (High Explosive Fragmentation Incendiary Tracers) that has a benefit of higher bullet speed and an additional round of ammo over the 37 mm configuration.

Since this aircraft has a very high low-to-middle altitude acceleration, you should use this plane primarily as a dogfighter at those altitudes. It is also important to note that this plane like all Yaks and like most other Soviet-built fighters, low high-altitude performance, however, even at higher altitudes, this fighter can be used as a Boom & Zoom aircraft, provided you pay attention to your speed. Turnfighting and dogfighting above 4,500 m are discouraged as at this altitude, many other aircraft will have superior turn capabilities and engine performance compared to the Yak-9UT, leaving it to struggle for any flight advantage.

While performance tends to suffer at higher altitudes, when kept closer to the ground, the Yak's performance starts to shine. This is especially true with its energy retention, such as performing a ~270-degree turn with minimal speed loss (~30 km/h) and the ability to regain this speed extremely fast.

Most enemy fighters will be between 3,000 and 4,500 m, with bombers being around 4,000 to 5,600 m. It's important to use your height advantage, drop down from your height and get behind the enemy. Once behind the fighter or bomber, do not engage it until you are close enough to see their tails in your crosshairs. Aim forward and fire only a single shot or a short burst, if armed with the 45 mm cannon (which is no longer than two seconds). Using the 37 mm N-37 cannon or the 23 mm NS-23 cannon, use a burst which is around two and half seconds.

While the earlier Yak-9T/K are able to reliably destroy enemies at their lower BR, the Yak-9UT will struggle to inflict serious damage to medium and heavy tanks with the 45 mm, while the 37 mm is barely capable of penetrating most medium tanks even from high angles of attack, and the 23 mm is all but useless against these targets. Still, it will often require multiple accurate passes with the 45 mm to knock out the crew of such tanks, and with the limited ammunition supply of 29 rounds, a more reliable yet slower strategy is to aim for the engine deck in order to set the tank's fuel alight multiple times and deplete their FPE reserves, this has the added benefit of immobilising the target for a significant period of time, which may allow your team to capitalise on the enemy tank's lack of mobility in certain situations.

The Yak-9UT is ultimately rather unsuitable for CAS at its BR, only truly effective at destroying light tanks and SPAA with the 37 mm and 45 mm. The 23 mm and 20 mm configuration has decent effect against such targets, but a diving attack is necessitated as both cannons will have very little effect at low to medium angles of attack against all but the most weakly armoured enemies.

The Yak-9UT is all but completely useless for attacking naval targets in Naval RB at its BR.

In Ground RB and especially in Naval battles, the Yak-9UT is best suited as an air superiority fighter. As the 37 mm and 45 mm AP shells required to penetrate tanks provide extremely inconsistent damage against enemy air targets, and neither provide substantial post-penetration damage against armoured targets, you will find much more success loading full HE belts and destroying enemy CAS.