Difference between revisions of "Yak-9UT" 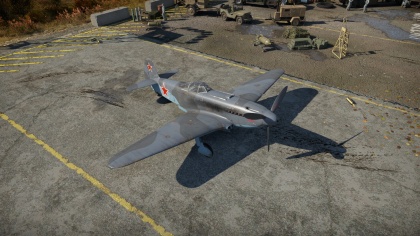 The Yak-9UT doesn't have any the ability to carry bombs, however, it does have access to other gun configuration options many other aircraft do not have. By default, you have twin B-20S 20 mm cannons mounted on the top of the nose cowling and a single 23 mm cannon mounted in the propeller shaft, you have also access to the twin B-20S and an N-37 37 mm cannon with higher damage but less ammo and fire rate. Finally, the last gun setting, a single B-20S and an N-45 45 mm cannon with only HEFI-T rounds (High Explosive Fragmentation Incendiary Tracers) that has a benefit of higher bullet speed and a few more ammunition rounds over the 37 mm variant.

The aircraft features two 64 mm bulletproof glass plates located the front and the rear of the cockpit and an 8mm steel plate located just behind the pilot's seat.

Since this aircraft has a very high low-to-middle altitude acceleration, you should use this plane primarily as a dogfighter at those altitudes. It is also important to note that this plane like all Yaks and like most other Soviet-built fighters, low high-altitude performance, however, even at higher altitudes, this fighter can be used as a Boom & Zoom aircraft, provided you pay attention to your speed. Turn-fighting and dogfighting above 4500 m are discouraged as at this altitude, many other aircraft will have superior turn capabilities and engine performance compared to the Yak-9UT, leaving it to struggle for any flight advantage.

While performance tends to suffer at higher altitudes, when kept closer to the ground, the Yak's performance starts to shine. This is especially true with its energy retention, such as performing a ~270-degree turn with minimal kph lost (~30 kph) and the ability to regain this speed extremely fast.

The Yak-9 was a further modification of the Yak-1 and Yak-7. In its core design, it was a redesign of the Yak-7. With few external differences, Yak-9 was at the same time much more advanced internally. This is not unexpected, as almost two years of design and combat experience of the Yak series went into the Yak-9. Also, at the time aluminium was in much greater supply than it had been two years previously at the start of the war. Amongst other things, the use of metal allowed the plane’s weight to be significantly reduced, meaning that more fuel could be stored and that the aircraft could be equipped with more powerful armament and more specialized equipment.