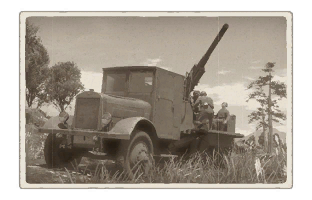 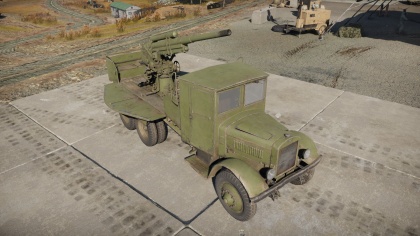 This unarmoured truck is equipped with a good fast-firing 76.2 mm canon, which has similar armour penetration to the infamous D-5T from later soviet vehicles. This is the last unarmoured truck chassis of the Soviet tech tree, after the ZiS-12 (94-KM) and before the ZiS-43.

"Protection?"
It has 6 crew members, meaning it can take a few shots and even resist MG fire (if well-covered). Ammo racks are covered with 12 mm steel plates, meaning regular MGs cannot ignite them. Otherwise, any HE shell will rip the YaG-10 apart really quickly and artillery usually shreds the vehicle with shrapnel. This low armour value has its advantages: APHE shells will often not detonate or simply not hit anything if shot from the sides. 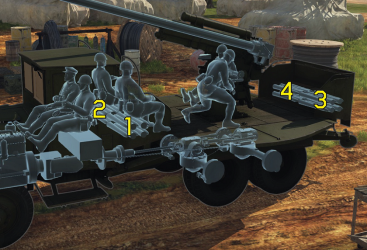 This truck is preferably used at a distance to increase its survivability. Most MGs have poor accuracy at distance, greatly decreasing their ability to shred the 29-K. It has a good and very precise gun capable of taking down (almost) any target it may encounter from the front. Always show the sides since it decreases the chances of having a bullet pass right through all of the crew members in one shot. Showing the side allows the YaG-10 to use the full 360° traverse to its best. If possible, only show the gun, this way, it allows minimal exposure and can allow for quick hiding at a moment's notice and if shot, only sacrifices one or two crew members.

Although this is a Rank 3 vehicle, its low BR often places it against Rank 2 tanks. Even with it's awesome cannon, this truck can encounter fierce foes with even better armour.