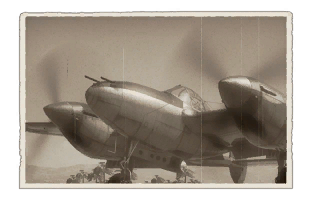 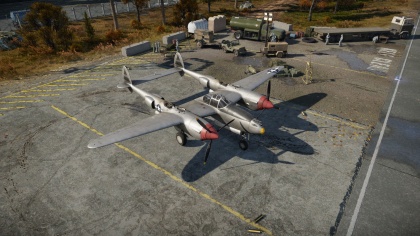 Despite being a heavy twin engine fighter the XP-38G has a quite good overall performance, its level speed it comparable to many single engined fighters and even faster than some of them, it can reach 550 km/h at the sea level and thanks to its superchargers the plane's maximum is speed is close to 660 km/h at 5000m alt and it doesn't drop or increase up to 11000m alt, that makes it a good medium and high altitude fighter and in most cases outperforms the opposition. Climb rate is comparable to other American fighters, the plane is able to reach 5000m in 4 minutes and 40 seconds which is quite mediocre, its climb rate at 1000m is close to 18 m/s, but again thanks to the supercharger it will not suffer so much at high altitude, when climbing from 5000m alt to 9000m alt it will outperform most of other fighters. Acceleration in level flight is decent and when it starts diving it gets very good, and it is required to keep an eye on the speed because the maximum structural speed limit is low in this plane. The XP-38G's turn rate is quite good but depends a lot on its Fowler flaps, they do increase the lift a lot but the drag too, sustained turn rate is quite good, better than in almost every other heavy twin engined fighter but in most cases only comparable or worse to other fighters, but on the other hand the instantaneous turn rate especially with deployed flaps in very good and can help a lot with getting the guns on the target and high deflection shooting. Of course due to the plane's configuration it suffers a lot from high speed compression, which starts close to 0.70 Mach. The other issue is its roll rate, at best it reaches 70 degrees per second at 400 km/h. The way that Lighting's engines are set makes it so the pilot does not need to worry about the propeller torque effect, the plane doesn't require any trimming except for some elevator adjustments to fly in a straight line.