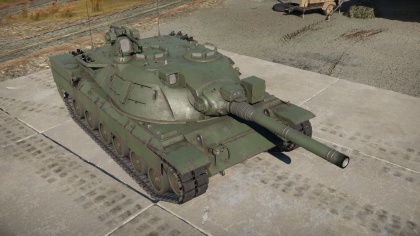 The XM803 was, in essence, envisioned to be a “budget version” of the MBT-70. Although the new vehicle would heavily be based on the MBT-70, inheriting many of its design solutions, it would also try to drastically reduce production costs by using more conventional and only American-made parts. Although this meant that the XM803 had to give up some of its high-tech equipment in favor of lower production costs, it was projected that the influence of these changes on the XM803’s combat performance would be minimal.

Despite showing favorable performance and being seen as a promising design by the Army, the XM803 still remained a comparably expensive tank to produce even with the applied changes over the MBT-70. Moreover, neither the MBT-70 nor the XM803 seemed to offer any substantial increase in combat performance over the already in service M60 Patton to justify the high production cost. This ultimately led to the Congress cancelling work on the XM803 only a short while after the cancellation of the MBT-70. In the late 1970s, some funding of the two failed projects would later on find its way to support the development of an entirely new, but this time around, more conventional tank project. That tank of course being the legendary M1 Abrams itself.