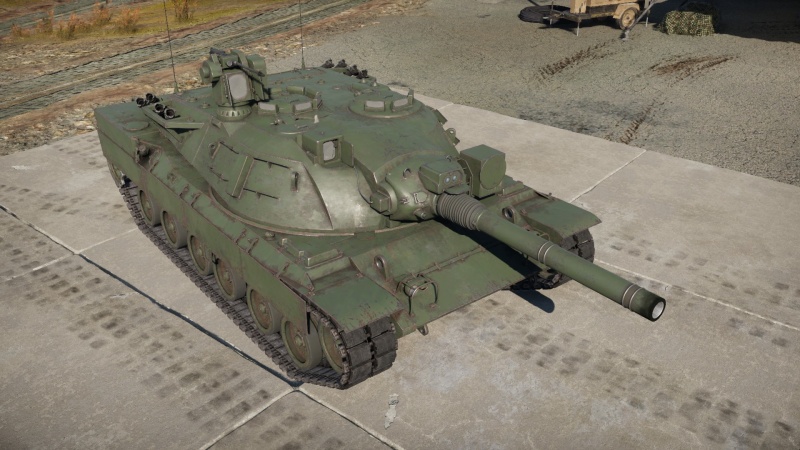 The XM-803's frontal armour is only effective versus full-calibre AP and APHE rounds and certain APDS rounds. Almost all large calibre (76 mm and up) have no trouble slicing through it, even when hitting the frontal armour at an angle. Large calibre HEAT-FS too has no problem going through, although the large fuel tank behind the frontal hull armour can sometimes absorb most damage. Because the armour has a layer of air in it, it is very effective against HESH rounds. All the spalling generated by the HESH round when it hits the first plate will get absorbed by the plate behind it. One big weak spot on the turret it the left (when facing it) turret cheek. This is because this part of the turret is not protected by spaced armour and only consists of 177.8 mm thick CHA plate, which most chemical and kinetic energy projectiles can penetrate with ease.

152 mm XM150E5 gun/launcher
Two-plane stabilizer
Reduces the swing of the gun in two planes while moving
Autoloader
Automatically feeds projectiles into the breech. The speed does not depend on the skills of the loader
Ammunition53 rounds
First-order26 rounds
Reload7.5 s
Vertical guidance-10° / 20°
Main article: XM150E5 (152 mm) 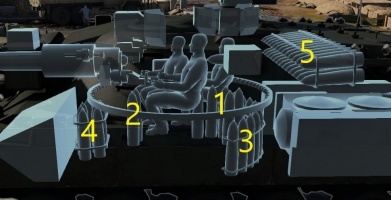 The XM-803, like the MBT-70, is a very good flanker. To get the most out of this tank you must use its high speed and acceleration to flank the enemy or set up ambushes. Its gun and ammunition are good enough to penetrate most lower BR tanks with ease, although when up-tiered you will have to resort to aiming for the weak spots of opponents. The HEAT round you get is free, and will easily penetrate tanks with plain steel armour, but it's lacking when facing tanks with composite armour, and it has a rather mediocre muzzle velocity, making aiming and leading at longer ranges more difficult. The APFSDS round has decent penetration and will penetrate most opponents with relative ease. It also has very high muzzle velocity, almost 1.5 km/s, making aiming even at longer ranges easy. The ATGM is very useful and free, it's very good at long ranges, and is very effective against stationary or slow-moving helicopters.

Once it became apparent that the MBT-70 project was doomed to fail in the early '70s due to high costs and reliability issues, the U.S. Congress decided to cut their losses on the project by cancelling the MBT-70, and instead, diverted funding to the development of a new project called XM803.

The XM803 was, in essence, envisioned to be a "budget version" of the MBT-70. Although the new vehicle would heavily be based on the MBT-70, inheriting many of its design solutions, it would also try to drastically reduce production costs by using more conventional and only American-made parts. Although this meant that the XM803 had to give up some of its high-tech equipment in favour of lower production costs, it was projected that the influence of these changes on the XM803's combat performance would be minimal.