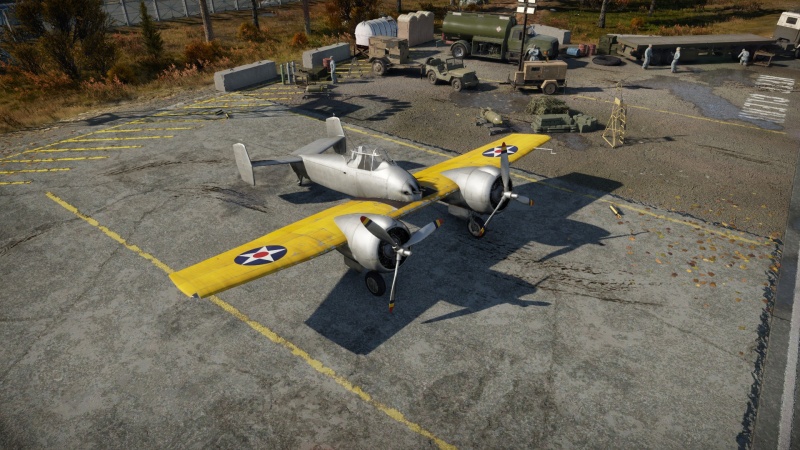 The XF5F Skyrocket is a premium gift rank III American twin-engine fighter with a battle rating of 3.0 (AB) and 2.3 (RB/SB). It was introduced in Update 1.37.

As a gift vehicle. the XF5F was only obtainable on special occasions throughout the years:

The XF5F Skyrocket is an oddity. Its lightweight and surprising manoeuvrability aren't what you'd expect from a twin-engine fighter. Indeed, it is among the most agile twin-engine planes at this rank. Coupled with the low weight and its two powerplants, this aircraft makes for a unique flying style. The responsive roll and pull, in addition to the effective combat flaps, engine throttle management, and acceleration, allows for some nifty dogfighting against heavier planes that may see you as easy prey. It locks up similar to the XP-50's high-speed compression as you go past 600 km/h.

Keep in mind, however, that the engines will overheat badly at low altitude, and even more so at around 2,800 m due to the supercharger. Overheating isn't nearly as serious at higher altitude (around 12,000 ft / 3,600 m), where fresh air will cool your motor apparatus quickly. Alternatively, you may manually set the radiators to ~40% water/20% oil for continuous 100% engine power. Overall, the XF5F is a plane that favours high altitude, medium speed engagements, where it is safe from crashing in the ground and has room to manoeuvre.

The XF5F is armed with:

The Skyrocket's primary role is going to be Boom & Zoom; the climb rate is decent, and so is the energy retention if you stay under 550 kph and opt for smooth, moderate turns. However, the lack of heavy armament means that you will have to keep your guns on target longer in order to achieve considerable damage. Such opportunity comes when the enemy is low on speed and not suspecting any enemies/tunnel-visioned on an ally; for example at the top of a loop, or in a sustained turn fight with an allied plane. If required, you can push the XF5F into a more aggressive energy fighter, similar to the Bf 109 series, where looping back on the enemy while holding superior speed and altitude allows you to extinguish their energy little by little. Some general tips:

In Realistic and Simulator Battles, the stiff opposition, in the form of F4U-1, Bf 109 F, La-5, Yaks, Hurricanes and Ki-61, will give you a serious run for your money. Always make sure you hold the energy advantage at all times and are picking your fights with care.

Countering an XF5F could include out-diving or -stalling with horizontal manoeuvres followed up by a steep ascend, exploiting its weak energy retention and sluggishness at low speeds. Another tactic is to force the XF5F into a head-on attack. Since it's not very well armed, there is a good chance that you will be able to deal damage without receiving much yourself.

The Grumman XF5F Skyrocket was a prototype twin engine, carrier-borne, interceptor aircraft; developed for the United States Navy. In January 1938, the U.S. Navy issued a specification calling for a lightweight carrier-based fighter / interceptor to replace the obsolete biplanes which were in use at the time. Five companies issued proposals, of which Grumman, Vought and Bell received contracts to produce a prototype. Grumman produced the XF5F Skyrocket, to complete with Vought's XF4U-1 Corsair (the prototype of the legendary F4U Corsair), and Bell's XFL Airabonita (a naval version of the P-39 Airacobra).

The requirement put an emphasis on the aircraft achieving the highest speed possible, and so for this reason the Grumman engineers chose to design a dual engine fighter. Grumman planned to fit the aircraft with two 23mm Madsen cannons, along with two Browning .30 machine guns; although this would eventually be revised with Browning .50 machine guns replacing the cannons. The main landing gear of the Skyrocket was built into the engine nacelles, and the wings were made to fold upwards just outboard of the engines in order to take up less room on aircraft carriers.

The Skyrocket was the first of the three prototypes to fly, taking to the air for the first time on 1st April 1940 and becoming the worlds first twin engined carrier-borne fighter. It was followed shortly after by the Airabonita on 13th May and the Corsair on 29th May. The XF5F proved to have good overall flight characteristics in it's first flight; however a number of problems were soon found with the aircraft. The oil cooling system was found to be inadequate, and the landing gear doors did not function properly. Following early test flights many modifications were made to the aircraft, including improvements to the cooling system, reducing the size of the cockpit canopy, redesigning aspects of the engine nacelles, and adding spinners to the propellers.

Bell's XFL Airabonita had been plagued with technical and design issues relating to the engine, aircraft balance, and landing gear; leading to it being rejected by the Navy. This left just the XF5F and XF4U in the competition. The XF5F had shown a high top speed of 616 km/h in early tests, and had proven itself to have an excellent climb rate of 4,000 ft/min, compared to the XF4U's 2,660 ft/min. However the single engine XF4U soon proved to be a better overall aircraft, achieving speeds of 650 km/h in later test flights, beating the duel engined XF5F.

On the 30th June 1941 the Navy gave Vought a contract to start producing the Corsair, and it soon became apparent that no such order would be placed for the Skyrocket. The XF5F continued flying as a test bed aircraft, but continued to be plagued by landing gear issues, eventually suffering two gear failures, the second of which lead to the aircraft being written off in December 1944.

Following the rejection of the XF5F Grumman worked on developing a dual engine land based fighter, the XP-50. The XP-50 was visually similar to the XF5F; however it had a longer noes, extending forwards of the wing, and a tricycle undercarriage. It also had more powerful engines than the XF5F, giving it significantly better flight performance. During testing of the single XP-50 prototype the turbo-supercharger on one of the aircraft's engines exploded, destroying the landing gear and forcing the pilot to abandon the aircraft. Using their experience from the XF5F and XP-50 Grumman finally developed the F7F Tigercat, which was accepted into service, becoming the first duel engined fighter to be deployed by the US Navy.