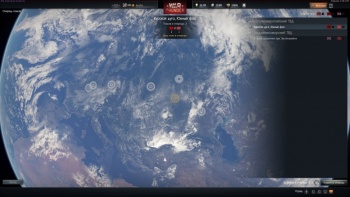 World War - a game mode involving battles on a global map. Conflict will occur in the format of "operations", which include dozens of individual battles.

The game mode differs significantly for the commander, officers and ordinary members of a squadron. Commanders and officers are able to choose which operations their squadrons will participate in, move forces in real time on the operational map and initiate battles.

In the World War game, RB game mode will be used with the marker mechanics of the AB.

Operational command (moving the armies on the map) is available for commanders and the officers in each squadron. Privates can only choose and join battles.

Icons indicate the army type: armour, aircraft, infantry or artillery. Armies can capture territory and participate in battles. Each army consists of a specific number of vehicles, the loss of which means the loss of the army. Read more details about the features of different armies and how to control them on the Armies page.

Airfields serve as a base of operations for air forces. The airfield icon displays the number of available aircraft for your army group.

When you select an airfield, you can see detailed information about it and order aircraft to take off.

The operational map is divided into sectors that define control of the territory and the front line. Each sector can be neutral or belong to one of the sides.

There are also special sectors:

To capture sectors, several conditions must be met:

When these conditions are met, the other side gets control of the sector. Also, a sector that is cut off from the rear (surrounded on all sides by the opponent’s sectors) and contains no ground armies of the defender, is considered captured and automatically changes its side.

In addition to the tactical control of the armies it is also necessary to take into account the type of terrain over which the army will move. Different parts of the operational map have different types of terrain. The type of terrain affects both the speed of ground forces and the type of missions created for ground battles in this map section.

In addition to the movement of troops it is necessary to monitor their status and any statistics of all controlled armies as well as the readiness of reinforcements, the morale of the armies and many other indicators that are important for victory. For these purposes each commander has a control panel.

In each operation, both sides of the conflict have a list of objectives. Completing any of the main operation objectives leads to victory.

Armies are combat units on the operational map. Click the left mouse button on an army to select it and give it orders or view additional information about it. To create a complex route, you can hold the “Shift” key and create a route by clicking the left mouse button. The order to stop or cancel the current action is "S".

The army panel contains all the information about the army.

The army is controlled by the following keys:

A confrontation between two opposing armies leads to a battle (not always true for confrontations between ground and aircraft armies.

In a confrontation, armies are moved to the battle point and lose the ability to move until the battle is over.

Ground forces cannot move through an ongoing battle. If an army attempts to do this, it will be pushed back and stopped.

Tip: To see whether an army will be able to pass between two battles, use Shift + LMB – the width of the path will always correspond to the radius of the army to which the path belongs

Armour and infantry armies have the ability to entrench themselves. An entrenched army receives significantly less damage from an artillery strike and fighting such an army will create Defence missions, where the defenders will have all the advantages.

Entrenchment takes time. After you give the order, you can see when the army will be entrenched in the army description.

A defeated army that has not been destroyed according to the battle results retreats in the opposite direction, away from the opponent, losing its previously held position and its “Entrenched” status, if it had it. Retreating aircraft armies stop responding to orders and return to the airfield.

Indicates the army’s morale level. Morale rises with every victory and falls with every defeat. An army with zero morale surrenders to the enemy based on the battle results and disappears from the operational map.

Ground forces located in a sector without a link to the rear are considered encircled. Such armies begin to lose supplies and will be destroyed after a certain period.

Encirclement is a very effective tactic! It is much easier to clear an army from the operation not by fighting but by using skillful tactical choices by the commander.

If there are not enough troops left in an army, it is considered destroyed and disappears from the operational map.

To create an aircraft army, you must select an airfield and specify a point of movement (right click), as with any other army. This will open the aircraft army creation window, where you must specify the aircraft and quantities for the army and choose the armament presets for each vehicle. You can only depart from the airfield within limitations: there are minimum and maximum army sizes.

Each aircraft that flies out of the airfield receives armament. In battle, you can only use the selected preset. If, according to the battle results, the aircraft was left without bombs, rockets or torpedoes, then in the next battle this aircraft can be used without these munitions. Reloading such munitions can only take place at the airfield.

Aircraft armies can spend a limited amount of time in the air, and the flight time for each aircraft depends on the maximum possible fuel load for each aircraft. The flight range of an air army will be calculated based on the minimum flight range value from all the aircraft. When the time runs out, the aircraft army returns to the base. During a battle, the fuel load for the aircraft will be calculated based on the remaining flight time.

Tip: The air army will remember a target if you specify the enemy’s army as the end point of the flight path. The air army will not pursue this target, but if it stops above several enemy armies, one of which has been stored as a target, then the attack will be carried out on this target.

The strike itself takes place in several stages. First is the guidance stage, followed by a series of volleys. Artillery can fire up to three volleys at a time, if there are enough shells. Shells for artillery strikes are supplied one at a time at regular intervals.Reinforcement does not occur if an artillery army has lost contact with the rear.

Artillery armies cannot be entrenched, while battles with aircraft always take place in Defense mode. Battles with ground forces are automatic and always lead to the destruction of the artillery army.

A battle is a confrontation between several armies. With rare exceptions, a battle in World War is a PvP mission where players use their armies’ vehicles to complete the mission objectives and achieve victory. The easiest way to join a battle in an operation is to click the “To Battle” button, it will put you in the queue for one of the combat operations where there are free places for your team. If you want to join a particular battle, you can do it by clicking on the battle icon on the operational map – it’s a round icon with crossed swords.

A battle’s status is indicated by the colour of its icon:

When armies collide, a battle is created with “Not started” status. You cannot enter the queue and join this kind of battle. Several conditions must be met before the battle status changes to “Getting ready to start”:

Battles change to the “Getting ready to start” status in the order in which they appeared on the operational map.

Queue and priorities for joining a battle

A ready battle begins after one of the players enters the queue for this battle. The battle will begin even if the queue contains players from only one team, but there is a delay before the start of each battle to allow players of both teams to assemble.

If there are more people in the queue for the starting battle than the maximum number of players in the team, those who have queued earlier will get into the battle, but players of the squadron whose armies are participating in the battle take priority over other players.

If there are empty places on your team in a battle that has already started, you can join it at any time after it starts and before it ends.

Some battles in an operation are automatic. These battles take place without the participation of players, and the result is determined automatically. Auto battles start outside the main battle queue and bypass all start requirements. Auto battles are not instant; the battle result will be available only after a certain period.

The mission for each battle is selected based on the type and status of the clashing armies:

The type of terrain does not affect the choice of the mission location.

In battle, only the vehicles present in the armies participating in this battle are used, but it may not be available to the players – depending on the mission, some of the army’s vehicles may be controlled by the AI.

Any losses, no matter if the player or the AI was in control, are recorded as the army’s losses, and if a vehicle is lost in the middle of battle, respawning will no longer be possible.

World War uses a respawn mode that reflects the confrontation between armies. Armies have a limited set of vehicles available for participating in battle, and they are randomly distributed among the players.

An air army can be added to a battle in progress, but only if another air army is not already participating in the battle on this side.

If the battle has already begun, the currently issued vehicles will not change for players, but each subsequent vehicle that players receive may be an aircraft.

Since each mission follows a confrontation between aircraft already in flight, another defining feature of World War missions is the absence of airfields. Instead, there are safe exit zones on the maps. If a player abandons an aircraft in a safe exit zone, the aircraft is recorded as a survivor and will not be deducted from the army, but it will no longer be available for use in this battle.