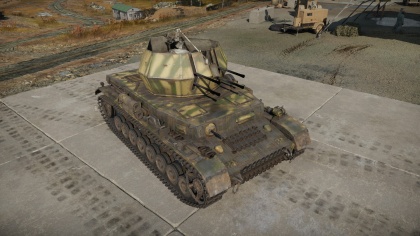 The Flakpanzer IV Wirbelwind is a anti-aircraft platform on a Panzer IV chassis. Armed with quad 20mm FlaK38 cannons, this machine will absolutely obliterate any enemy plane that's unfortunate enough to cross paths with it. Due to the high fire rate, this machine effectively spews out a river of high exlposives. Any airplane unfortunate enough to even touch that stream will at least burst into flames, if not more severe damage. However, they are incredibly easy to spot because of the tracers. While an individual 20mm shell does not do much damage, it is very hard when using the Wirbelwind to hit an aircraft with only one shell. The sheer number of shells will overwhelm the aircraft, and act like a laser, cutting off pieces and burning others.

unfortunately, this is where SPAA tend to not be nearly as effective against ground forces, but also see marked improvement in their intended role as CAS counter and deterrent.

to that end, your 4x20mm automatic cannons give you the ability to fire a lethal stream of explosive round at any pilot who wanders into your sights.

while in tank guns dispersion (the MOA cone that is used to determine accuracy) is something that is ideally kept to a minimum, this vehicle benefits from it by having shots spread out in a sort of "shotgun" effect, rather than having 4 seperate beams of projectiles. this means that if you can get your lead point right, your odds of shredding aircraft with even a momentary burst is exceptional compared to other types of AA present at the ranks that you will be operating this vehicle.

rather unfortunately, you only have 20 rounds per gun (for a total of 80), meaning that it is best to fire 3-5 round bursts, to make effective use of what ammunition you have and your magazine size. this is one of the few areas the wirbelwind is caught lacking, the others being an open crew compartment roof and the fact that your SPAA houses most of it's crew in a thinly armored turret.

so, this is where it's performance tapers off a cliff.

while you do have access to APCR/Pzgr.40 belts, they are largely useless against medium and heavy tanks, which become very numerous at 3.7BR.

you can definitely take out light tanks, but if you are playing as a SPAA and even see enemy tanks, your team is likely about to be spawncamped, and you are really only able to generate SL from hitting enemy tanks. on paper the pen stats look good, but when you actually look at the pen statistics at 200-500 yards, it would require the enemy to be within rock throwing distance to penetrate.

The design called for use of the proven Panzer IV design. The Wirbelwind uses the Panzer IV hull, but the original Panzer IV turret was removed and replaced with a open-topped nine-sided turret that mounted the anti-aircraft armament. The anti-aircraft armament chosen for the vehicle was a quadruple mounted 2 cm FlaK 38. Though a closed-top turret design was desired, the amount of gasses given out by the gun made this impossible for the crew. The production of the Wirbelwind commenced at the Ostbau Werke at Sagan, Silesia. Between 87 to 105 Wirbelwinds were manufactured from May to November 1944, with the discrepancies due to differences in the Wehrmacht service records and Ostbau Werke's production records.

The troops nicknamed the Wirbelwind the "Keksdose" (Biscuit Tin) due to its unique turret shape. The Wirbelwind were equipped with Panzer formations to protect them against low-flying aircraft. During the Battle of Normandy in 1944, flak units in the 12th SS Panzer Division was credited with shooting down 45 allied planes. However, there weren't enough to go around in the front-lines so many Panzer formations were left vulnerable to enemy aircraft due to lack of availability of the Flakpanzers. Not only did their small numbers made their effect on the front minimal, the 20 mm cannon was determined to insufficient against the more armoured aircraft that the Allies are fielding. Thus, the design was changed to not use the quadruple 2 cm Flak 38, but instead the 3.7 cm FlaK 43 in the new designation Flakpanzer IV Ostwind. Aside from that the Wirbelwind also served as a ground support role, which it proved very well at with its rapid firing 20 mm cannons.