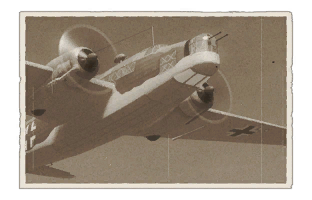 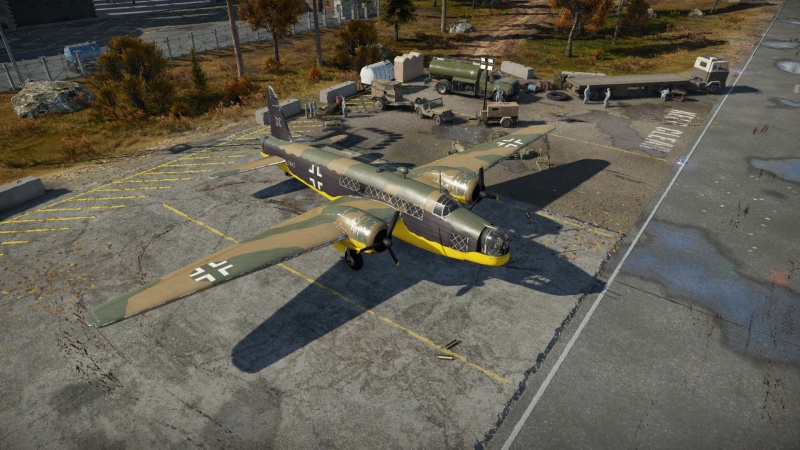 The British Wellington and German Mk I's are identical. With its versatility, the captured Wellington is an excellent alternative to the He 111 H-6.

Wellingtons are great 2nd rank turret platforms with wide arcs and stable flight. If your flight controls are shot out, adjustment of engine power will allow stable flight and more opportunities to fight back. Just remember it has only 7.7 mm (.303 in) machine guns so it is more luck to earn kills with them.

As with all bombers, crew training with at least Expert Qualification is important for profitable missions.

The Wellington Mk Ic (Germany) can be outfitted with the following ordnance:

The Wellington Mk Ic (Germany) is defended by:

If you are playing Arcade battles, the key tactic is to climb, as in Arcade battles the Wellington will not have trouble getting over 5,000 m (16,500 ft). From there you can take out the enemy bases from "Orbit". Once the bases are dead the main airfield can be killed if you have a good escort and fellow bombers.

In Realistic Battles, you can use the Wellington's diving speed to take out ground targets such as Light Pillboxes or Tanks. The 18 x 250 lb bombs will be able to get through Light Pillboxes if direct hits are made, and area damage on AAA, Artillery, or Vehicles. The 9 x 500 lb bombs can be used to kill heavy pillboxes on direct hits, destroyers on direct hits or they could be used to destroy an enemy bombing point/airfield. The Wellington, although sturdy in form and able to take a hit, will still be destroyed if the enemy gets cannons or enough machine guns on you. Having a teammate you can count on when you fall back after bombing to save you from enemy fighters is something that can ensure your survival.

If you are defending the Wellington from enemy fighters, ensure you keep them in your sights. The Wellington has amazing gun coverage horizontally, especially on the tail and sides. If an enemy fighter pulls alongside your plane, you have not only the single side turret but also the nose and tail turrets that turn more than 180 Degrees. Another nice thing about the Wellington's turrets is that if there is a clear sky, they can be used to strafe light ground targets with ease.

The key point with this Wellington is that if you push yourself and your plane too far, you will die. It's a great frontline bomber, but without team support, you become nothing better than bait or a free kill for the enemy.

Performance wise the Willington was not notably remarkable, its strength lay on the inside. Devised by one of the greatest innovative thinkers in history, Sir Barnes Neville Wallis devised a geodesic structure resulting in an exceptionally strong airframe. Together with Reginald Kirshaw "Rex" Pierson, they designed their record making Vickers Wellesley opening the way for the Wellington and larger Warwick. With high aspect ratio wing and spacious fuselage, it proved capable of handling a myriad of missions including early airborne radar and robust enough to absorb severe damage and fly home. Although the bomb bay configuration limited bomb size its payload was slightly more than the Heinkel He 111 H-3 and with greater range. It is also one of the first aircraft to have a powered turret in the extreme tail with a very wide arc; however, it still was inadequate to defend itself against attacking fighters and early models lacked self-sealing fuel tanks. Still, this aircraft was admired by crews and affectionately called Wimpy after Popeye's hamburger loving friend and sidekick who's full name is J. Wellington Wimpy. Over 11,000 made, it equipped many RAF squadrons including those comprised of foreign crews like the Polish (4 squadrons), New Zealand (No. 75), and Czech (No, 311) one of which was captured by Germans who used it for intelligence and training. Viking, a passenger transport variant, became the world's first pure jet transport prototype aircraft in 1948.

The Vickers Wellington was the most widely produced British bomber, with a total of 11,461 machines built. Wellingtons were used from September 1939 on as long-distance scouts and day/night bombers. Beginning in early 1940, due to their low effectiveness, they were used only at night. From 1942-43, the Wellington was the main aircraft used by the Royal Air Force's Bomber Command.

A Wellington Mk.IC bomber became a German trophy in the winter of 1941. On the night of February 6, 1941, the Wellington Mk.IC (No. RAF L7842) belonging to No. 311 (Czechoslovakian) Squadron RAF flew a sortie to bomb a target in the area of Boulogne, France. During the sortie, the aircraft had to perform a forced landing (either due to an accident or under the compulsion of the Germans) and thus passed undamaged to the enemy. The whole Czechoslovakian crew was taken prisoner.

The bomber was ferried from the landing site to the Luftwaffe's Test Facility at Rechlin, where it underwent a full series of flight tests. The aircraft then obtained the German code T+KX and was operated in 1941 with 2./Versuchsverband OKL, where various captured aircraft were in service.

One of the members of the Wellington Mk.IC (L7842) crew, Flight Lieutenant Ernst Valenta, took part in the so-called "Great Escape" made by Allied Air Force pilots from Stalag Luft III, a German prisoner-of-war camp in Poland, on March 24, 1944. He was captured by the Germans and executed by shooting on March 31, 1944.