The Vickers Mk.7 is a rank VI British medium tank with a battle rating of 9.7 (AB/RB/SB). It was introduced in Update 1.93 "Shark Attack". 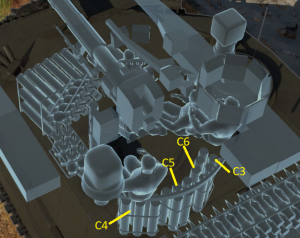 Ammo racks of the Vickers Mk. 7. Additional charges not visible in first image.

In the mid 1980's, Vickers Defence Systems developed a new MBT as a private venture to find a successor to the Challenger back in following official specifications. The Vickers Mk.7 is a further development of the earlier Vickers Mk.4 Valiant main battle tank. The tank was very similar to the Mk.4, using the same "Valiant" or universal turret that the Mk.4 used, but being built with a Leopard 2 chassis, along with an MTU engine supplied by Krauss-Maffei. The tank was never adopted into service by the British Army, but its design was used as a base for the Challenger II MBT. The Vickers Mk.7 tank was actively offered for export, however it also received no production orders from other countries. Therefore only one Vickers Mk.7 prototype has been built.

Despite its naming, the tank has no relation to the Mk.1 Vickers MBT sitting at rank V.

Following the failure of the previous Mk. 4 Valiant project, Vickers continued work on their design, confident in its success. As a result, Vickers developed the Mk.7 tank in the late 1980s on the basis of the previous Mk.4, hoping that it could be seen as a potential replacement for the Challenger 1. The new Mk.7 featured the existing turret of the Mk.4, though fitted to a Leopard 2 chassis.

Contrary to expectations, the British armed forces didn't procure the Mk.7, and so, the focus shifted towards the export market, similarly as was the case with the Mk.4 Valiant. Vickers developed an improved version of the vehicle, capable of mounting a variety of different 120mm cannons, in an effort to attract foreign interest. However, the high cost of the Vickers Mk.7 achieved only the contrary, with potential foreign interest being lost to other, more economical designs on the market.

Additionally, by the end of the 1980s, Germany imposed a ban on military equipment sales to countries in unstable regions, mainly those in the Middle East. Vickers, using the German-built Leopard 2 chassis, was therefore prevented from making sales to the most promising potential buyer of the Mk.7 - the United Arab Emirates.

Due to the high production costs resulting in low foreign interest in the vehicle, as well as dependency on outside factors, further development of the Vickers Mk.7 was officially halted, with only a single prototype being built for testing. However, although the Vickers Mk.7 itself became, in the end, another failed project, much of the experiences gained during its development found use in the creation of the far more successful Challenger 2.