Difference between revisions of "Vampire FB 5" 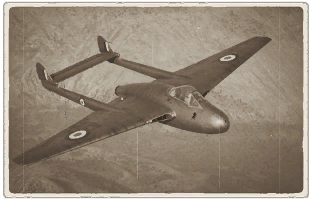 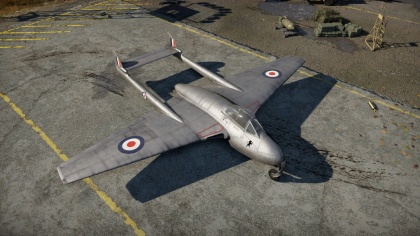 In order to be able to use the de Havilland Vampire's turning power, one should worry about one's energy state. To do such, climbing is important, as is maintaining airspeed. One should never risk being below 400 km/h since having little speed makes it incredibly hard to evade any attacks by faster aircraft. As such, climbing at speeds above 400 km/h IAS is a healthy option - altitude provides manoeuvring space and more options for manoeuvres, whilst keeping a certain speed means that the pilot is ready at all times to manoeuvre against an enemy. Once an enemy is spotted, gaining speed is the best choice, since the lack of it means the Vampire will become every pilot's nightmare - low, slow and un-manoeuvrable.

Its extreme manoeuvrability for a jet means, however, that lining up for a shot is an easy task when an enemy is flying near and when an inexperienced or frustrated enemy jet falls into the trap of turning tightly against the Vampire, it will likely end up destroyed. Aiming the guns might be a challenge at first for inexperienced Vampire pilots since their placement below the centre of gravity makes the Vampire's nose shift downward while firing. Pilots should be aware that turning too much can leave them vulnerable to other enemy aircraft due to the significant loss of speed, so they should never commit to a dogfight if more enemies are lurking nearby.

1948 also saw the first testing of the FB.Mk.5. This was initially a modified Vampire F.3 with a strengthened and clipped wing, increased armor and greater ground clearance for the carrying of external ordnance. This fighter-bomber variant of the Vampire was capable of carrying up to 2000 lbs of bombs or 60 lb rockets, and went on to equip 40 squadrons within the RAF as well as being the first RAF jets to operate in the Far East. The Vampire FB.Mk.5 was used operationally in ground attack missions against insurgents in Malaya until it was replaced by the Venom in 1953. The FB.Mk.5 was also used as the basis for the Royal Navy’s Sea Vampire F.Mk.20 which, fitted with an arrestor hook, long travel landing gear and larger wing flaps, entered service with the Fleet Air Arm in June 1949. A popular export fighter, just under 3300 Vampires were built - many under license overseas.