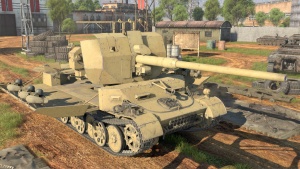 The Versuchsflakwagen is a rank III German tank destroyer with a battle rating of 5.7 (AB/RB/SB). It was introduced in Update 1.87 "Locked On" as a reward in the "Battlefield Engineer" event.

Designed by the Krupp corporation originally as an anti-tank vehicle in 1941, it was realized that by using 8.8 cm flak cannons, it could achieve not only an anti-tank role but also an anti-aircraft one as well. Because of this, this vehicle was given the 8.8 cm Flak 41 as its main and only armament.

The VFW has decently high survivability in battle, utilizing its thin armour to great effect. After all,"no armour is the best armour". The vehicle is effective both with side skirts up and down and out of the way.

When the side skirts are in the up position, they will cover the sides of the exposed crew and gun, offering 5 mm of armour which can protect from oncoming machine gun fire. However, they will most likely not hold up to a round fired from the main gun of a tank.

With the skirts down, the tank destroyer can easily be disabled due to the exposure of the four crew members to the elements, or the gun being taken out of commission. On the other hand, if the tank, gun, or both are still in action, the front panels of the Flak 41 can be used to block machine gun fire, effectively protecting any crew still remaining to operate the gun.

The VFW is armed with the Flak 41 cannon allowing it to disable or destroy a majority of its intended targets within its battle rating range. The reload speed of the gun is around 5 seconds which allows for quick and consistent firing upon targets.

The VFW was the first of several projects of the Krupp company to mount a heavy anti-air gun on a mobile armored chassis. This initially developed version, which mounts the 8.8cm FlaK 41 cannon onto a heavily modified Panzer IV chassis, was created in 1944.

Initial tests of the vehicle were performed throughout 1944. However, apart from tests producing mixed results, it was lacking interest that eventually led to the project’s ultimate cancellation later that year. As a result, the VFW never left prototype stage and only a single experimental vehicle was ever produced.