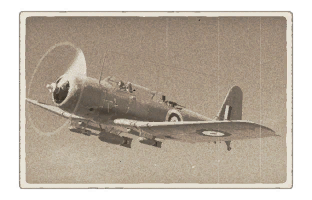 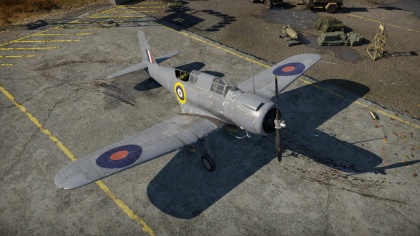 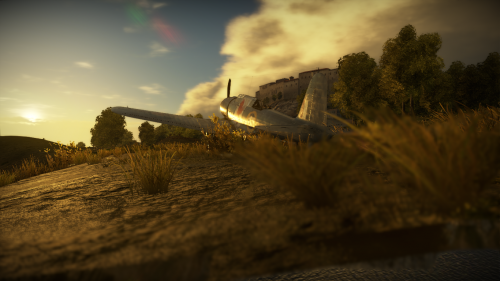 The V-156-B1 can be outfitted with the following ordnance:

The V-156-B1 is easily one of the more powerful aircraft in the lower battle ratings and can be an absolute monster at low battle rated arcade matches due to its monoplane design, payload, and a large number of offensive machine guns. It is adequate for grinding at low ranks due to its low repair cost and versatility. It can gladly function as both a fighter and an attacker, and once dumping bombs, is capable of Boom & Zooming enemies in the vicinity. In addition, it has airbrakes in the form of dive brakes, which come in useful when landing, attacking ground targets or attempting to shake off an enemy. Although you have a turret, you should not rely on it to be able to destroy fighters on its own - it is good at fending off fighters and keeping newer and/or more cautious players at bay, but it will only be able to shoot down fighters on its own by sheer luck. Your frontal armament, however, is more powerful - and with the usage of airbrakes at critical moments in the fight, such as when the enemy is close to you and approaching from the rear, you can use your airbrakes while reducing your throttle to zero to induce what is known as an 'overshoot'- forcing the enemy behind you to zoom over you instead of staying on your tail by means of a sudden speed decrease. This puts the enemy in front of you and allows you to use your four frontal machine guns to shoot down the lightly-armoured enemies you face at this battle rating.

Arcade Ground Strike maps - where the aim is to destroy the enemy's ground troops, and often, dogfights happen over ground targets at low altitudes - are where this aircraft will excel most. A suggested strategy is to use the aircraft as a dive-bomber in arcade battles, using your superior altitude and therefore speed advantages (you start in the bomber spawn) to hit ground targets before zooming back towards friendlies, or waiting until the fighters have started engaging, and then attack ground targets. The aircraft (at stock payload) has two 100 lb bombs and one 500 lb bomb. At these low BRs, your bombs will annihilate enemy armoured car and AAA formations, and your guns are nigh-upon-unstoppable at this BR. Use "Universal" or "Tracer" belts for best effect.

While waiting for payload reload, go for enemy planes. British, German and Japanese aircraft are particularly vulnerable to your attacks due to their relatively low armament in a head-on engagement and lack of any and all armour protection. Soviet biplanes (the I-15s) will have heavier or equal armament, and American monoplanes will be harder to kill than biplanes due to robust construction and having similar speeds. At a BR of 1.3, the best opposition you will face are P-40s, Bf-109E-1s, Ki-43s and H-75s. All of these aircraft have large amounts of machine guns with exhaustive ammo pools, and if they can catch up to you, you're likely going to be shot down by the opposition, since you don't have the performance to fight them without assistance. If you feel lucky, you can duke it out by baiting them into a turn fight, where your good turn radius with landing flaps active can make you the victor in the situation. Never rely upon your single rear gun to keep you safe- at best it can only really function as a deterrent to keep fighters at bay. Always keep an eye on your six, and when you finish a ground attack run, look around and see if anything's coming before you go in again. If you see a fighter coming for you and can manage to turn towards them enough that you can get a firing solution on them, you can probably win. British 7.7mm guns are among the best in the game in terms of raw fire chance values and penetration, and if loaded with the "Tracer" belt- a full mix of Incendiary Tracer (essentially a standard incendiary bullet with a tracer element) and Armour-Piercing Incendiary (Usually the most damaging type of bullet in any given gun) in 50% proportion to each other- they can shred through any air target at a battle rating of 1.3.

A suggested loadout is a minimum load of fuel (33 minutes, more than enough for arcade battles or realistic battles), Universal or Tracer 7 mm belts on both defensive and offensive 7 mm guns (maximal AP-I ammunition) and the payload of 2 x 250 lb bombs and 1 x 500 lb bomb.

Weaponry upgrades and engine should be prioritized with this aircraft, due to its role as an attacker. Its two primary roles are lugging bombs where they need to be in the minimal amount of time possible and then using them to inflict maximum damage. The FSBC mk.5 gives quite an upgrade to the aircraft, replacing the 100 lb bombs (mediocre at best) with the more powerful 250 lb bombs. However, the FLBC mk 1 is a novelty, at best, and only really useful when lugging bombs onto bases in Operation mode in RB. However, the V-156-B1 is a very bad choice for such a role, and thus, it should be disregarded.

The Vought V-156-B1 was originally an American plane. It was designed and built to meet a United States Navy order for a new Scout bomber for carrier use. It had the United States Navy designation of the SB2U and was given the nickname the "Vindicator". Few orders for this aircraft was given by the United States Navy due to the equally good if not superior SBD Dauntless dive bomber. It ended up in the hands of the Fleet Air Arm after the defeat of France. The French ordered 50 of these planes before their collapse. The FAA used them on various escort carriers and called the plane the "Chesapeake". The Chesapeake was phased out in November 1941 and was replaced by the faithful and reliable Fairey Swordfish.

Equivalents in other nations' trees: