This gun fires quickly for its size, with a reload time of 0.43 seconds stock, 0.33 seconds with an expert crew. The mount is fully traversing, limited only by objects in its way such as other guns or parts of the ship. Vertical guidance is -5°/+89° which gives it the ability to fire anywhere it pleases.

Universal is very useful as it is able to damage both aircraft and lightly armoured ships severely. With how fast the gun can fire, only half of the belt being HE is not an issue against aircraft, and the same holds true for the AP rounds against other vessels.

Compared to the earlier 45 mm/46 21-K, the V-11 fires 5 times faster while not sacrificing too much explosive mass.

The 40 mm Bofors guns found on many American and British vessels have almost identical performance to the V-11.

The 37 mm guns found on German ships have far lower fire rates, while the 37s found on Italian ships are either better (Breda mod.38/mod.39) or far worse (Breda mod.32).

The Japanese have no direct counterpart, the closest being their trusty 25 mm mounts which have a fire rate 5 times slower.

This gun is best used as it was designed: to crush enemy aircraft with its devastating fire rate and high-explosive shells as well as smother enemy lightly-armoured vessels with its armour-piercing rounds. This mount does not have the best horizontal traverse rate, so it is advisable to take control of the turrets and rotate them towards the target you want them to engage before they come into range and you turn it over to the AI.

The V-11 is a twin-barrelled variant of the Soviet 70-K naval cannon which is itself an adaptation of the Red Army's 61-K. During World War II, the 70-K was the main automatic weapon in the Soviet Navy, however, it suffered from a short barrel life of only 100 rounds. This problem was noted by the Soviet Navy early on and they were already working on making twin-mount and quad-mount variants before the German invasion in 1941. The dual-mount version was still being tested when Operation Barbarossa occurred and was swiftly cancelled as was the quad-mount version, though the latter prototype saw action installed on the Oktyabr'skaya Revolutsiya. Work on the dual-mount version would continue after the war creating the V-11, which is water-cooled instead of air-cooled like the 70-K and 61-K. The V-11 was adopted in 1946 and gradually replaced the 70-K until production ended in 1957. The V-11 along with the 70-K were replaced by the dual 57 mm ZIF-31. China however, also notably produced two variants of the V-11. Their regular twin-mount was the Type 65, which was later replaced by the Type 75 which mounted the gun in a turret to serve as a CIWS. 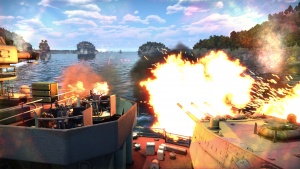 V-11 mounts join the Zheleznyakov's main guns in firing at an enemy vessel.