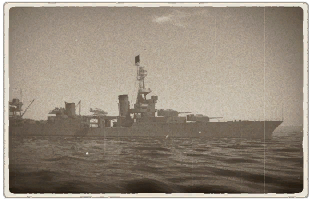 The Northampton carries a main armament of nine 8’’/55 Mk.15 Guns in three triple mounts, two fore and one aft. These guns are the standard armament for American heavy cruisers, and pack an impressive punch. The guns have good ballistics, and can access four shell types: Mk.14 Common, Mk.19 APCBC, Mk.25 HC and Mk.17 SP Common. Of these shells, the Mk.17 Special Common shell is most effective against cruisers, as it has a great explosive mass and enough penetration for most cruiser main armour belts. The Mk.19 APCBC shell can be used against heavily-armoured targets, but has a relatively small explosive mass of 1.65 kg. Finally, the HC shell, with almost 10 kilograms of explosive filler, is highly effective against destroyers and unarmoured vessels.

However, the guns have two main drawbacks. Firstly, they have the slowest reload speed of any 8’’ gun, with a fire rate of just three rounds per minute (20-second gun reload). This means that they fire much slower than their contemporaries, which typically have a fire rate of five rounds per minute (12-second reload). As well, the guns have the slowest horizontal turret rotation speed of any heavy cruiser, at just 3.1 degrees/second (comparatively, the Admiral Hipper’s guns rotate at 6.8 degrees/second).

The Northampton carries a secondary armament of eight 5’’/25 Mk.13 anti-aircraft guns, mounted on single open-mounts. These cannons are very effective medium-to-long range anti-aircraft guns, but are not effective against any armoured targets. They have access to just two shell types - Mk.36 AAC (HE-TF) and Mk.28 AAC (HE-VT). The former is a time-fuse shell (meaning that the fuze is set before the weapon is fired), while the latter is a proximity fuze shell that explodes automatically upon reaching the target. Both shells are ineffective against armoured targets, having ~35mm of penetration. However, they are both capable of dealing with air and unarmoured targets quite effectively. The HE-VT shell is typically the better pick, as it offers greatly-improved efficiency against air vehicles.

Northampton carries four quadruple 1.1 inch "Chicago Pianos". The 1.1 inch/75 Mk.1 Gun, otherwise known as the “Chicago Piano” (because it was the size of a baby grand-piano), was the standard anti-aircraft armament for most American ships prior to the introduction of the 40 mm Bofors cannon. These guns are mediocre at best; though they have a good fire rate (similar to the AN/M2 Browning), they aren’t too effective at dealing damage, and also jam rather quickly. As well, take note that the gun doesn’t have ammunition options.

Northampton also carries eight single 12.7mm AN/M2 machine guns. The AN/M2 is a navalized anti-aircraft version of the popular Browning machine gun. This gun is rather ineffective at dealing significant damage to enemy aircraft, and is only effective within ~1.5-2 kilometres at most. As well, keep in mind that these guns have a long 12-second reload after the gun’s magazine has been used. 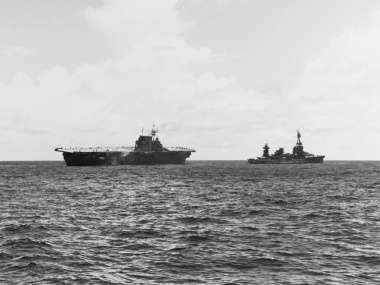