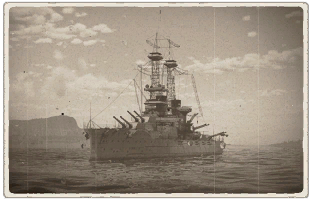 When the British Dreadnought was built, the United States had been completing their own “all-big-guns” battleship, the South Carolina class. Despite the fact that the new ships were not generally inferior to the British competitor, they were criticized for their small hull size and weak auxiliary artillery.

Upon the treaty’s signing, the Navy’s strength was limited, particularly in battleships. As a result, both of the Delaware-class battleships were gradually put out of service during the 1920s while newer battleships were built to replace them. USS Delaware was broken up for scrap in 1924, while USS North Dakota  eventually met the same fate in 1931, after serving as a target ship for several years.