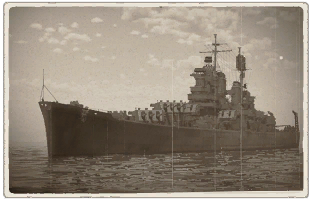 The Baltimore-class,USS Baltimore (CA-68), 1943 is a gift rank V American heavy cruiser with a battle rating of 5.7 (AB/RB/SB). It was introduced during Update "Hot Tracks" as a reward for the 2020 Operation W.I.N.T.E.R. event.

Baltimore does not have as much armour as a Hipper-class heavy cruiser, it is somewhat on par with IJN counterparts such as the Mogami.

Having lots of AA also means lots of crew. However, lots of crew can also be lost due to the AA being repeatedly destroyed. It is not recommended to repair the ship unless major damage has been sustained.

Baltimore's speed is a bit slower than other heavy cruisers. Her agility is better however, displacing 30% less than a Mogami.

She is unlikely to evade a torpedo, but being a heavy cruiser, she should survive a hit or two.

Baltimore, being a WW2 US cruiser, shoots super-heavy AP shells out of her 203 mm guns. These shells are heavier than others, weighing over 150 kg. Most other nations' shells weigh usually 110 kg. This gives them a longer flight time, but a steeper angle. The idea was that, at long ranges, the shells would penetrate battleship's decks from above instead of hitting the much thicker side armour.

Her secondaries are found on most WW2 US ships. Dual purpose, dual 127 mm turrets. She has six of them. Those turrets are her first line of defence against PT boats and aircraft.

As with most WW2 US ships, AA armament is where she shines. Compared to a Cleveland-class light cruiser, Baltimore has many more 40 mm Bofors emplacements. She has twelve quadruple 40 mm Bofors turrets, and twenty-four 20 mm Oerlikon single guns. This is much stronger than what could be mounted on light cruisers, giving her awesome close range firepower.

Unlike the Cleveland-class, she cannot fire Variable Time-Fuse shells out of her main guns, giving her slightly less long range AA power compared to a Cleveland.

Baltimore feels right at home when protecting allies from aircraft. Her 203 mm guns have a difficult time killing dreadnoughts, she should shoot first at other cruisers and destroyers.

Her super-heavy 203 mm shells are useful to shoot above islands while avoiding incoming fire.

She can count on close range AA to protect her from most air attacks while staying near islands. 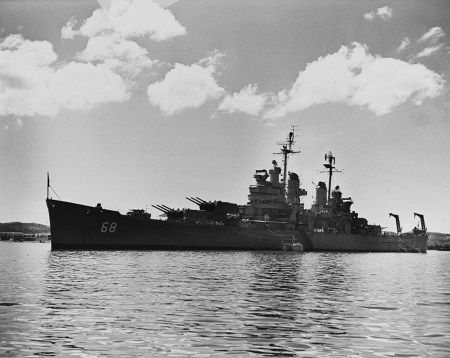 USS Baltimore (CA-68) was the lead ship of her class of heavy cruisers built for the United States during the Second World War. Based on the preceding unique heavy cruiser Wichita, the Baltimores were extremely heavily armed and carried a potent anti-aircraft armament, though like all other American cruisers, they lacked torpedo armament. Baltimore saw extensive service in the Pacific Theatre during the Second World War, and carried Franklin D. Roosevelt to his meeting with American military leaders at Pearl Harbour. After the war, she was reduced to reserve, but reactivated for the Korean War. Despite false allegations by the North Koreans that Baltimore had been sunk by North Korean G-5 torpedo boats, she was actually reduced to reserve, and scrapped by 1973.

The Baltimore class was designed to be a successor to the previous Pensacola, Northampton, Portland and New Orleans classes. The ship’s design was based off of the USS Wichita, a unique heavy cruiser built just before the outbreak of hostilities. The hull itself was also extremely similar to the hull of the Cleveland class, a class of light cruiser that was then under construction. Superficially, the Baltimores look extremely similar to the Clevelands, but carried a heavier main armament. Built to this specification, the USS Baltimore was laid down in May of 1941, and commissioned after the start of the war in April of 1943.

Following her commissioning in 1943, Baltimore joined the Pacific Fleet and spent October-November 1943 in training off the coast of California. Between November 1943 and June of 1944, Baltimore was part of a coastal bombardment force that provided fire support at the Makin Islands, Kwajalein and Truk landings. During this time, the force made great use of Baltimore's heavy main guns, proving themselves to be effective coastal bombardment weapons. Baltimore continued to provide this fire support capacity until June of 1944, when she returned to the Continental United States.

After returning to the United States, Baltimore embarked President Franklin D. Roosevelt and transported him to Pearl Harbour, where the president met with Admiral Chester Nimitz and General Douglas MacArthur. After the meeting, Baltimore transported the President to Alaska, and then returned to active duty. She spent the last part of the war providing fire support for American troops at Iwo Jima and Okinawa. After the cessation of hostilities, Baltimore joined the “magic carpet fleet” and transported American veterans back to their homeland.

After the war ended, Baltimore joined the reserve fleet at Bremerton, where she stayed until the Korean War started. She was reactivated in 1951 and assigned to the Atlantic fleet, meaning that she did not see service in the Korean theatre. She later represented the United States at the UK Fleet Review of 1953, and spent a short time in the Eastern Theatre before being reduced to reserve again. A North Korean museum claims that the Baltimore was sunk by G-5 Torpedo Boats in 1950, and has an exhibit showing “the actual boat” that sank the Baltimore. In fact, the Baltimore was never in the Korean Theatre during the war, and was scrapped in 1973. Baltimore earned a total of 9 war stars for her service during the Second World War.

The development of new heavy cruisers for the US Navy began after the outbreak of World War II. The restrictions of the London and Washington Treaties ceased to be relevant, so the United States enthusiastically began to refine the projects built within the limits of the restrictions. Based on the heavy cruisers of the USS Wichita class, a new cruiser was developed to correct the issues of its predecessor, namely low stability and a shortage of anti-aircraft weapons, and also with improved seaworthiness, protection and range. The lead ship of the new series, the heavy cruiser USS Baltimore, was laid down in 1941. The distinctive features of the new large series of cruisers are extremely powerful and versatile anti-aircraft weapons and an increased hull width for increased stability. The USS Baltimore entered service in 1943 and immediately began performing combat missions in the Pacific. Until the end of World War II, Baltimore was in the midst of naval war, taking part in a number of US operations. After a short "vacation" it was re-commissioned in 1951, but did not take part in the new, Korean War. The ship was decommissioned from service in May 1956.