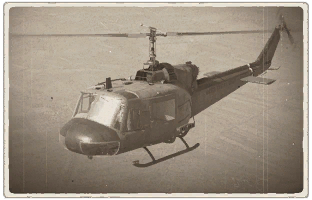 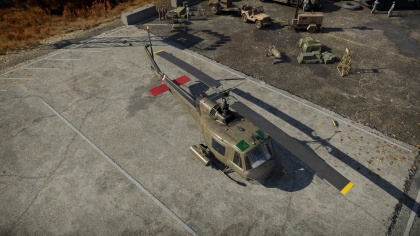 The UH-1C is a rank V American utility helicopter with a battle rating of 9.3 (AB/RB/SB). This helicopter was introduced in Update 1.81 "The Valkyries".

The UH-1C can be outfitted with the following ordnance after unlocking the tier II Weaponry module M129:

The UH-1C can be outfitted with the nose turreted M129 Grenade Launcher after researching and purchasing the tier II Weaponry module M129. The M129 is a grenade launcher which can fire 40 mm grenade shells at the rate of 400 rounds per minute with a muzzle velocity of 850 ft/s (260 m/s). An upgrade from the old M75 and redesigned, the torque produced from firing the weapon was eliminated and recoil was greatly reduced. To ensure safe operation of the M129, when the trigger finger releases the firing trigger, the launcher automatically recenters itself and points forward (safe position) before firing can be resumed.

The ammunition used is a 40 x 53 mm high-velocity grenade, the default in War Thunder is the high explosive anti-tank grenade (HEATGR). Rounds from this launcher are good at peppering lightly armoured vehicles, vehicles with open crew tops and heavier armoured vehicles which may have weak spots to exploit.

The XH-40 was built with the Lycoming YT52-L-1 (LTC1B-1) turbo engine helicopter, the first non-piston helicopter tested by the military and first flew in 1956. Even before the prototype had flown, the Army put in an order for six YH-40 service test aircraft in which they could field test to determine how it would work under military unit operations. Proving successful, Bell was awarded a contract to build another 100 helicopters which were designated HU-1A (Helicopter Utility-1A) and hence was officially named "Iroquois". Iroquois ended up being a mouthful for people to say, so a nickname developed from the HU-1 designation which ended up being pronounced as "Huey" and stuck. In September 1962, the Department of Defense changed up the aircraft identification system to streamline between all of the different aircraft and their variations and changed the HU-1 to UH-1 (Utility Helicopter-1). Even with the change, the official Army name and the new DOD designation was rarely used as Huey was so well recognised as the name, that is what was to most people.

During the Vietnam War, the UH-1 earned several other nicknames other than "Huey" which quickly identified to troops what role the helicopter had been outfitted for. Gunship versions of the UH-1s were identified as "Frogs" or "Hogs" if they carried rockets while if they just carried guns, they were identified as "Cobras". Troop transport versions were called "Slicks" due to weapon pods being absent on the external pylons while they did retain their door gunners. Later in the war from 1967 to 1968, the gunship Huey’s were replaced by the new AH-1 attack helicopters.