Difference between revisions of "U-SH 405" 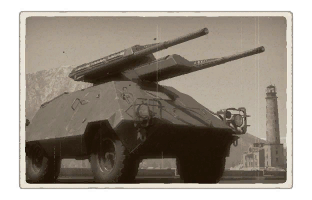 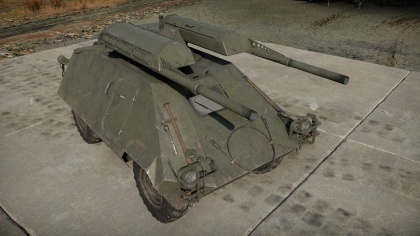 The Landsverk U-SH 405 is a rank V Swedish tank destroyer with a battle rating of 7.0 (AB/RB/SB). It was introduced in Update 1.97 "Viking Fury" and is a prototype vehicle from the late 1950s. The key feature of this vehicle is the double high-penetration, fast-firing rocket launchers mounted on top of it, making it a force to be reckoned with for any tank it faces.

The U-SH-405 simply cannot afford to take any damage, it will die instantly from pretty much anything. However, the ability to fire its high-penetration rockets with no reload time at all makes it very good at taking out any target, and even several targets at once if the occasion arises.

With only 2 crew members and only 10mm of armor at most, the U-SH-405 will die very easily, be it to aircraft, machine-guns, artillery, etc. As such, it is best to avoid frontal engagements unless necessary.

With 80km/h|49.7mph forward and 157 horsepower for 5.7 tons, the U-SH 405 has good mobility in arcade. However, in realistic, the top forward speed is 73km/h|45.3mph for 90 horsepower, making it good on-road but just decent off-road and awful at climbing hills. The reverse speed is 9km/h|5.5mph, which works most of the time but can still be too slow in some situations (especially off-road).

The U-SH-405 has for sole armament two 81mm rocket launchers, but it still has very impressive firepower - especially considering that it is a light car. Each launcher comes with 9 high-penetration rockets that have similar ballistic properties as regular HEAT shells. The rockets can be fired all at once in less than 10 seconds, making it able to kill several tanks of any type in just a few seconds, provided they are aimed properly.

The rockets are most efficient at close to medium range, over 600 meters, they start to become quite inaccurate. On top of the only 18 rockets, it is also fairly long to replenish them; as such, one should use them with caution.

Thanks to the very high penetration of its HEAT rockets, the U-SH-405 can kill any tank it faces from pretty much any angle; this, combined with its near-instant reload and high on-road speed gives it great flexibility. However, the vehicle can be killed by anyone and anything, the main threats to the U-SH-405 are American tanks (and any other tank that has high-caliber machine-guns) and aircraft. Some tanks in particular, like the American T34, T30 and T32, should be avoided because of their multiple .50 cals and high-survivability against the rockets.

The good mobility and low-profile makes the U-SH-405 very good at flanking and relocating in general, and the high firepower makes it devastating on unaware targets.

The U-SH-405 works best at supporting allied vehicles as they can draw attention away from itself, but the limited amount of ammunition forces it to stay relatively near strategic points to be able to replenish later-on.