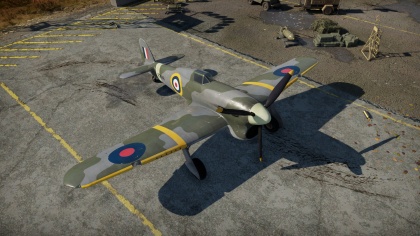 The Typhoon Mk Ia is a fast fighter for its rank but isn't good at turning due to its massively thick wings.

The Typhoon Mk Ia is a great fighter for the rank it is at. The first thing you will notice with the Typhoon Mk Ia is that it is insanely fast, so diving at a five to ten-degree angle, if you are being attacked or if your attack failed, is a solid choice if you have the altitude that is. However, if you are playing Arcade battles with this plane the diving tactic may not work since the Arcade battle maps are quite small, it is still worth trying since it is a low tier plane and because of that have a low repair cost. One other thing worth noting is that the Typhoon Mk Ia has 12 x 0.303 calibre machine guns, which is a lot of guns, but they are only rifle calibre guns so if you want to take down bombers, you should consider getting another plane with cannons. But you are a fighter after all, not a bomber hunter.

so, for Air RB, you will want to use Boom and Zoom tactics, as your high power (for 2.7) and wing loading will allow for high speed passes on lower flying planes.

When encountering fighters, avoid turnfights at all cost, this aircraft simply doesn't turn very well. Your best bet is to either outrun them by WEP'ing and diving, which will force them to break off pursuit or break off their wings, or utilize engine controls to manuver as to get behind them. with bombers and less manuverable aircraft, Boom and Zoom applies.

Tank RB: "In Fast, Target Blast, Out Fast." One of the unique capacities the Typhoon occupies, is being able to carry two 500lb bombs, giving you ground strike capabilities.

Seriously learn to use MEC (manual engine controls) as they are crucial to getting the most potential out of this aircraft, given the lack of Auto propeller pitch control.

Using MEC, (which should ideally be within reach of your keyboard hand if on PC, such as the number keys above the WASD keys) hold down the button for 100% Propeller Pitch and Mixture, while using the mouse wheel to control throttle. Use it to get a quick takeoff, and then set it to 90-90% throttle (using whichever key is assigned to engine control toggle 1) and cruise to the battlefield. It is recommended to keep an eye on the map by toggling M periodically, to indicate potential targets. By the time you are at the Area of Operations, you should have a target in mind. Fly around the far outskirts of the map, to an angle of approach that you think will be the opposite of where your target is looking. Considering you will likely be going over 250mph, wait until your target is about to be in sight, then toggle engine controls back on, hold the MECs to 100%, dump the throttle, Gear on/Flaps Landing (once below 250mph), Gear Off. doing so will effectively perform a hard braking manuver, slowing you down enough to accuractely place your munitions. Make sure to set the timers on the bombs to at least 3-5 seconds, as the bombs going off too early will likely destroy your aircraft with the shock wave.

Once you've dropped your bombs, flaps raised, throttle WEP, and run out of there as quickly as possible before the enemy SPAA can react.

The biggest advantage to this method is you can effectively enter the airspace, and engage targets faster most other aircraft, with as little warning to enemy forces as possible excepting enemy aircraft. At the same time, because you are flying a fighter equipped with 12 .303 machine guns, you can engage a ground target and then use your superior speed (against ground attackers like Stukas, russian light bombers, japanese light bombers) to annihilate enemy air forces.

Your biggest threat is the He-100 D-1. It can match you for top airspeed in level flight, but the Typhoon can accelerate far better, meaning that you are not without hope.

If you find yourself in pursuit, be prepared to use the MEC and throttle to keep them in front of you. If they get behind you, lead them into a turn or a dive, using the engine controls to let them whiz past you at top speed, as you cut inside their turn thanks to your lower airspeed. Then, a quick burst of your 12x1,000rpm .303 browning MGs will shred them like a cylindrical cheese grater mounted to the crankshaft of a car at rev limit. Against enemy fighters and bombers otherwise, the "boom and zoom" tactic is most applicable, as you simply don't have the turning capabilities of dogfighters at 2.7.

The Hawker Typhoon was a single-seat, all-metal monoplane fighter, first designed as a high speed interceptor.