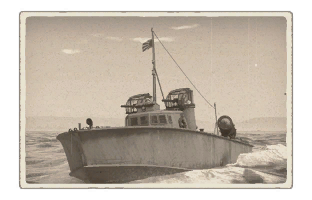 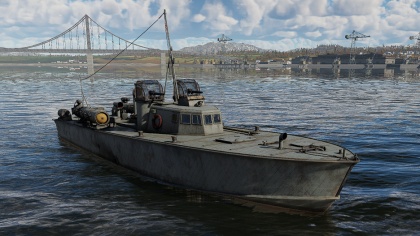 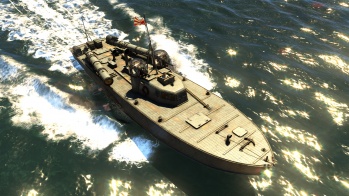 The mobility and speed of this boat is it's strongest asset. It's responsive to input and can reach a top speed of 72 km/h (44 mph) making it currently the 3rd fastest Japanese ship in game. However, it's speed is about equal to most other lower tier MTBs, and in some cases slower. It can outpace Sub-chasers and other gun boats, but it's hard to actually use it's speed effectively as it's weaponry performance is so poor, the potential it has in it's mobility doesn't really count for much.

The Type T-1 is equipped with two Type 92 (7.7 mm) machine guns, which are incredibly underwhelming. This boat currently has the least effective armament in the game, they do very little damage on all fronts and at even a slight distance struggle to penetrate the hull of most ships, let alone score critical damage. The guns come with three belts-

Even if it's not by a large margin, the API rounds do deal the most damage, structurally and internally. They also do the most damage to aircraft as well, a good burst on target will usually take out most of the weak biplanes you'll likely be coming across in the low tiers. To maximise the effectiveness of the guns you'll want to stay at a close range, as past around 750 meters or so the guns really struggle to do any meaningful damage. The firing arcs of the two turrets are not very versatile either, to fire with both turrets you'll need to be shooting either directly ahead or behind, at either side of the boat only one turret will be able to fire, leading to a tiny amount of damage output. 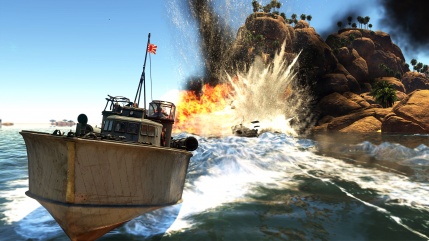 The Type T-1, destroying an enemy boat with depth charges

Main article: Type 44 No.2
The Type T-1 is equipped with two Type-44 torpedoes, they can travel a max of 4 kilometers at 65 km/h (40 mp/h). With the 'Torpedo mode' modification selected they can travel a max of 8 kilometers, at a speed of 48 km/h (30 mp/h). With this modification they have impressive range for the tier, however they have very little damage output, having only 121kg of TNT equivalent explosive, they should still be able to cause fatal damage to any vessels around the tier, but against Destroyers or other large ships it will definitely take multiple hits to score a kill.

The Type T-1 can carry two Type 95 depth charges, which can be dropped to maim other naval targets, they have rather limited viability though as most MTBs will be able to outrun the explosion, however they are useful for attacking larger ships, as if you can reach them unnoticed one or two of these depth charges will sink the vessel. 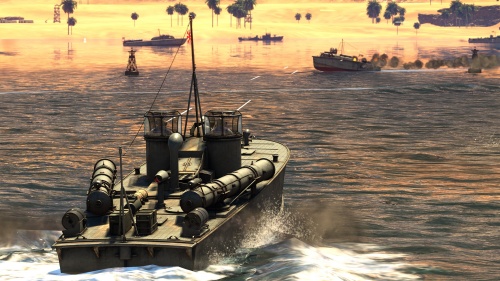 This boat is fairly difficult to use effectively, especially considering that it's damage potential on all fronts is so low. Your only reliable way of killing ships is to use your torpedoes, either aiming for larger slower vessels or aiming for commonly traveled sight-lines or choke points. Your primary armament is close to useless in a one on one engagement, so after your torpedoes are launched or being reloaded, try sticking with a group of your teammates, you lack the firepower to sink an enemy vessel on your own but can contribute collectively with your allies. Try to aim for an enemy's crew if possible, the guns do very little structural damage, but if you aim for the bridge and radio room you can slowly cut down your opponents crew percentage.

If you come across a large ship or vessel with some big guns it's not worth engaging them, turn on your smokescreen once unlocked and retreat to your teammates or behind some terrain. There's no use in attacking these vessels with your guns alone. You easily have the speed and mobility to escape from tricky situations under the cover of smoke, so prioritise unlocking it if possible. It's important to stay on the move and not make yourself a target for enemy vessels, you have no armour and a well placed burst from any cannon will likely disable you, stay by cover and your friendlies for protection. Also consider not activating the 'Torpedo mode' modification, as most engagements at this tier wont exceed 4 kilometers, and you're going to want the extra speed to catch enemies out.

Boats of this type were developed in 1939 as part of the fourth construction program for the Japanese fleet. They were based on the experimental Type B boat, which in turn was based on the British Thornycroft CMB boat captured in China in 1938. The first boat was put into operation in 1941. In total, six boats of this type were constructed, only one of which survived. In 1942, she was badly damaged and used for training after restoration. The other five boats were lost in conflicts during the years of 1943-1944.