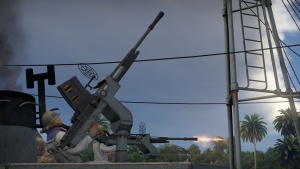 No. 13 and No. 13 took part in a hunt for USS Nautilus (SS-168) in June 1942, damaging the submarine with depth charges and forcing it back to Perl Harbor for month-long repairs. The No. 27 was likely the last victim of the USS Grunion, before it sunk 4 days later. No. 18 sunk USS Amberjack (SS-219) on 16 February 1943. In October 1943 No. 15 took part in the sinking of submarine USS Wahoo (SS-238). On 14 November 1943 the No. 20 engaged in a gunnery duel with the HMS Taurus (P399), with the submarine hitting the bridge of the chaser with the QF 4-inch Mk IV (102 mm) gun, killing the captain and most of the crew onboard. The ship suffers a number of other hits that eventually flood her engine room forcing the ship to be towed back into the port for repairs. The submarine returned back to the port undamaged, despite No. 20's crew claiming a direct hull hit and dropping a number of depth charges.

8 August 1945 marks the most successful anti-aircraft duty of the class, with the No. 19 damaging six out of fourteen B-25 bombers trying to strife it in the Tsushima Strait between Japan and South Korea. The ship survives the encounter and returns back to the Kure port, about 20 km away from Hiroshima just days after the atomic bombing.