Difference between revisions of "Type K-8 No.13 late" 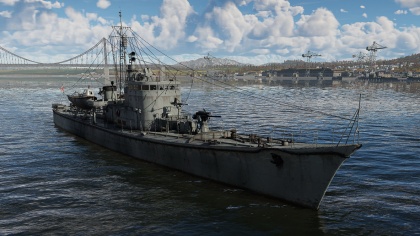 8 cm/40 Type 3 cannon is more useful for long range fight. It have quite fast reload but on short range you cant compete against nimble boats with fast firing cannons.

Same as predecessors Type K-3 and Type K-7 this boat is equiped with three single mountings of the 25 mm Type 96 autocannon, which makes for a very potent secondary weapon. The HE type rounds this gun fires will have no trouble knocking out PT boats and even larger support vessels, sometimes even with one magazine all together. You can also use AP type rounds will have no problem with armoured boats. Two cannons are placed on sides and one on back (similiar to Type K-3) which means two of them can shoot to the side at the same time and they can cover a fairly wide area together, which makes knocking out ships a lot easier. Additionally due to the HE these cannons can engage targets at range and still do damage. This cannon can also cause critical damage to aircraft with only a single hit.

Unlike predecessors, this boat have separate anti-aircraft armament which consists from twin Type 93 (13.2 mm) machineguns. Although you should still rely on you secondary armament as anti-aircraft which can do significantly more damage compared to 13.2 mm machinegun.