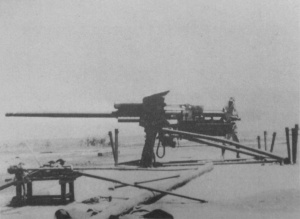 The Type 5 75 mm gun (also named the Type II) was the second largest gun to be fitted on a Japanese tank in WW2, only being surpassed by the 105 mm Type 5 cannon mounted on the Ho-Ri. It was designed as the main weapon of the Chi-To and Chi-Ri tanks to handle the perceived threat of the M26 Pershing, which had the armour to thwart nigh every anti-tank gun that Japan had in their inventory.

The Japanese Type II gun is an extremely formidable cannon that boasts great accuracy and solid penetration at the cost of a long reload time and middling explosive filling. Despite only being found on tanks below BR 5.0, it matches and even surpasses certain aspects of most BR 5.7 guns such as the American 76 mm M1 and Russian 85 mm ZIS-S-53, meaning that tanks armed with this gun will struggle significantly less in up-tiers. However the greatest downfall of this gun is that its only anti-tank shells are uncapped APHE, meaning that it has issues against well-sloped armour.