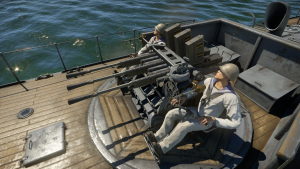 The closest comparison with the Type 96 calibre and penetration performance wise is the Oerlikon Mk.II (20 mm) and its derivatives. However, the Oerlikon Mk.II is notably superior with a rate of fire over 70% greater at 450 rounds/min, as well as belt size of 60 rounds, four times as great as the Type 96. It also has a explosive mass in its HE shells over twice as much as that of the Type 96. The German equivalent, MG C/38 (20 mm) in various mountings, takes this difference even further with an explosive mass over three times as large. However, unlike both of these, the Type 96 has access to a belt containing only HE rounds, the 25 mm HEIT belt.

The Type 96 could be mounted in single, double, and triple mounts, typically operated by three, seven, and nine crew members, respectively. The single, double, and triple mounts weighed 785 kg, 1,100 kg, and 1,800 kg, respectively. All mountings were manually laid (though some triple mounts on certain ships received electric drive systems), and ammunition was carried to the gun by crew and manually hand loaded. The Type 96 most commonly did not have a gun shield.