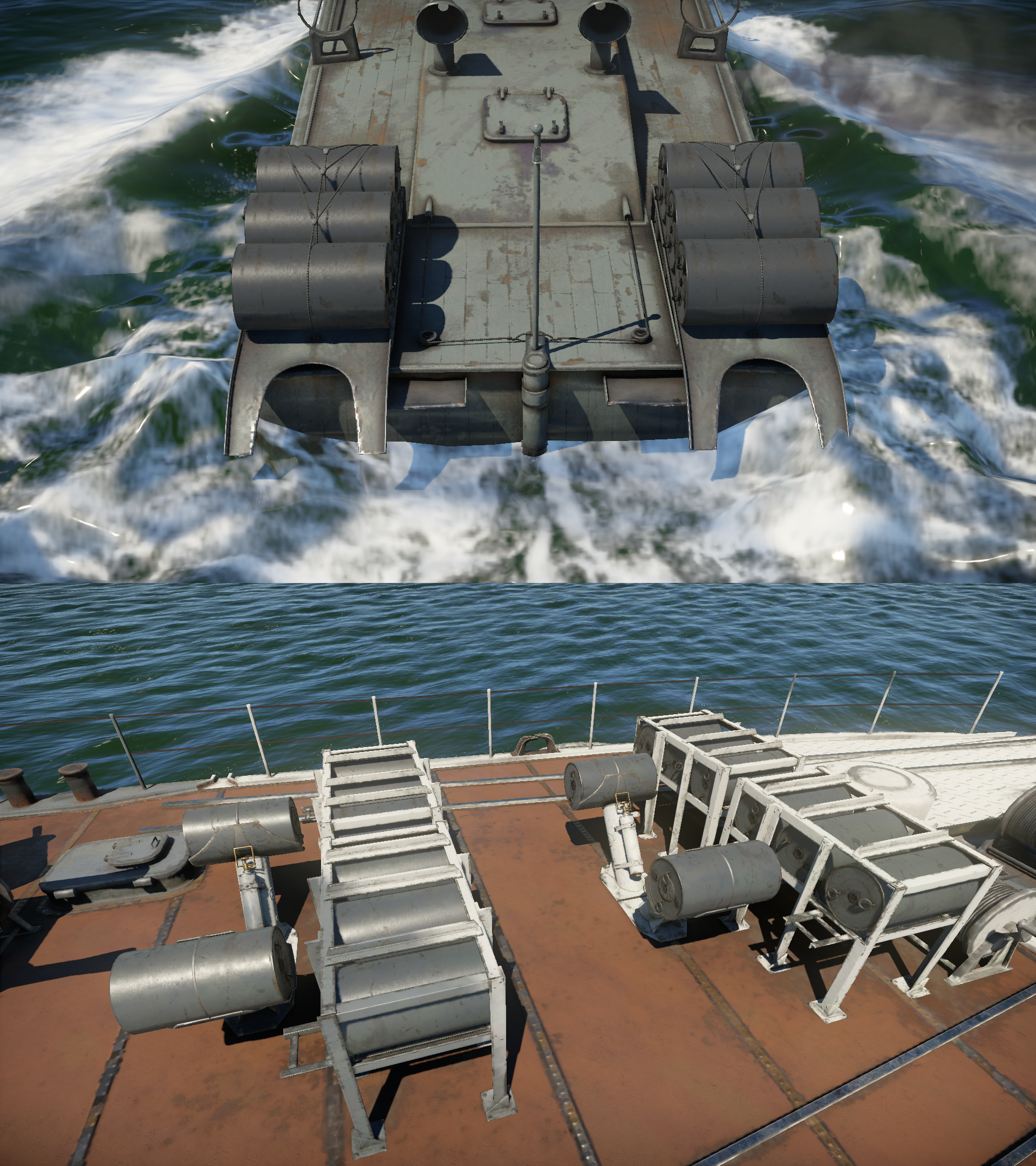 The Type 95 depth charge has a relatively low explosive mass for a depth charge at 100 kg. Every other depth charge currently in the game have 130 kg TNT equivalent or higher. Exceptions include WBF depth charge and Mk.10 Hedgehog mortar.

The WBG depth charge is completely identical to the Type 95 in game, weighing 160 kg and having a 100 kg Amatol explosive charge with 100 kg TNT equivalence.

Without the presence of submarines, the usage of depth charges are very situational. If using the depth charges that drop off stern racks, there is no reason to use any Depth Charge activation time setting above the minimum 3 seconds, since higher times means the depth charge will sink further, and thus away, from the target. With a fast boat, sailing up right next to a slower target and dropping the depth charges can lead to some success.

The depth charges mounted on depth charge throwers are a even more situational. They cannot be aimed and have a long flight time, making them difficult to use against moving targets. Their detonation times also cannot be changed, detonating 3 seconds after hitting the water. They can be used to hit an enemy behind cover, though as with other depth charge uses, this is extremely situational.

Designed in 1935 and entering service in 1940, the Type 95 depth charge was a depth charge used by the Imperial Japanese Navy for anti-submarine warfare. The depth charge weighed 160 kg and contained an a 100 kg Type 88 explosive charge. It had two depth settings, 30 m and 60 m, and sunk at a rate of approximately 1.9 m/s. There are two other versions, the Type 95 Model 1 Mod 1 and Type 95 Model 1 Mod 2, that increase the explosive charge and allowed for 90 m and 120 m depth settings. The Type 95 was detonated by a piston pushed by water filling up an internal chamber. The intake could be varied to set the detonation depth.

The Type 95 could either be dropped off of stern racks or fired from the Type 1934 depth charge thrower. The Type 1934 was a Y-gun with two arms facing either broadside. Both arms could be fired at once or individually. A unique aspect of the Type 95 depth charge is that they could be fired with an optional parachute. This increased the flight time of depth charge and allowed slower vessels to safer exit the area before the detonation when using the shallowest depth setting.