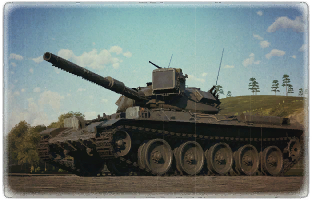 The Type 74 F is a rank VI Japanese medium tank with a battle rating of 8.7 (AB/RB/SB). It was introduced in Update "New Power".

As with most medium tanks of the rank, the hull of the Type 74 F is only capable of stopping some autocannon fire and has very vulnerable sides, however, the turret armour of the Type 74 F is closer to US and British turret armour level. While it's unlikely to stop most APFSDS, it is very likely to deflect stray APDS and APHE. Light tanks will likely have to get close and personal to penetrate it, as penetrating cupola even with APDS belt is a challenge due to its size.

While the 105 mm gun is relatively equal to one of other nations, the ammunition and optics of the Type 74 F are exceptional. It has all the same shell types of NATO tanks. The Type 74 F also has a laser rangefinder, which makes it really easy to check aim in RB, compared to tanks it fights in down-tiers and sometimes even in up-tier. The gun depression is the only real disadvantage, forcing operator to use hydropneumatic suspension. Main issue is that if chassis got damaged while tank was shifting, it will refuse to work and tank might get stuck in awkward pose, being unable to aim at opponents, however usually enemies aim to kill instead of just disabling the Type 74 F.

Ammo racks of the Type 74 F

As the Type 74 F is very comparable to the Leopard 1 Series, especially the Leopard A1A1, it is recommended to play them in the same fashion as such. In a Hit & Run tactic.

The additional benefits of the Type 74 F over the Leopard A1A1 are:

With all the additional benefits out of the way, it shouldn't be negated it's still a gen 2 MBT with barely any armor to rely upon other than the strong turret which still will be defeated by most rounds that the Type 74 F will face. It is advised to make use of the terrain to your advantage in combination with the hydropneumatic suspension. The stabilizer also allows for the Type 74 F to shoot on the move and due lower top speed compared to the Leopard, should be even easier to shoot on the move.

But even though armor isn't the strong suit of the Type 74 F, it gets an amazing choice of rounds to make use of. Even the strongest tanks shouldn't disregard a stock Type 74 F as it gets HEATFS as stock shell and has access to the M735 APFSDS shell as soon as tier I (with a second more potent Type 93 APFSDS shell as tier IV modification), while such a shell usually is a tier IV modification for most 105 mm L7A3 carrying tanks, this improves the Type 74 F's combat performance by a lot.

The Type 74 (F) is the last non-major modification of the Type 74 family. The F variant comes mounting plates on the front of the hull to mount a Type 92 mineroller. Only 10 of the F-Type were made.

Compared to the Type 74, differences come from preceding variants such as: