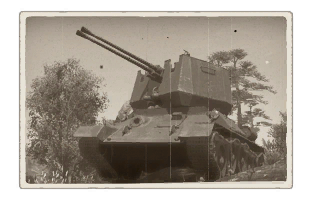 The Type 65 Self Propelled Anti Aircraft Gun is a bit of an enigma, as no official documentation exists concerning its design or construction. Even today, almost half a century after the type first became known, little is known about it - so perhaps it is best to first focus on what little is known about this unique and T-34-based SPAAG.

With the lifting of the US embargo on North Vietnam in 1994, new information about the Vietnam War from (formerly North) Vietnamese sources finally became available, and visitors to the Vietnam People’s Air Force Museum in Hanoi noticed a photograph on display which gives an entirely different turn to the Type 65's story. This singular photograph, three SPAAG's moving to the front, shows three tank-mounted anti aircraft guns, one mounted on a T-34-85, the two others on the chassis of an Su-76. The nature of their construction seems to indicate that they - and the captured Type 65 - were in fact locally-built improvised vehicles, combining the hulls of discarted or damaged tanks with AA guns to increase the number of available anti aircraft guns for use against US forces, the Hanoi-displayed picture showing a T-34-85 hull with a 57mm S-60 AA gun rather than the Type 65 used on the captured vehicle.