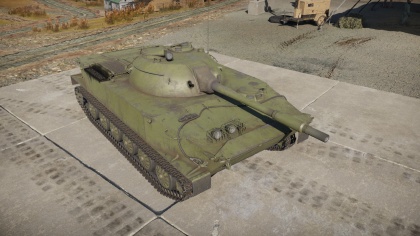 The Type 63-I is a rank IV Chinese light tank with a battle rating of 6.3 (AB/RB/SB). It was introduced in Update 1.91 "Night Vision". While very similar to the PT-76 , the Type 63-I is updated with the same turret seen on the Type 62 and with an upgraded engine.

The Type 63-I's armour is very light for its rank and should not be relied upon against any serious anti-tank fire. Even heavy-machinegun fire and autocannons pose a serious threat to this vehicle. Your best chance of survival is to play hide n' seek with your enemies, only to poke out when shooting.

The Type 63-I sees a decent improvement in mobility compared to the preceding PT-76, thus making this tank more attractive for flanking, or early game rushing. The Type 63-I is also good for hillclimbing and can reach some nifty positions on some maps.

The Type 63-I is best used in a way that avoids direct exposure to enemy fire and gives you time to set up shots and ambushes. Flanking is definitely a recommended method as this gives you the time you desperately need due to slow turret rotation and reload. Flanking also gives you chances to shoot at enemy side-armour, which is the only way to penetrate heavier enemies if you use the conventional shells.

Another method requires the HEAT-FS shells, and that method involves hiding far away from the enemies and engaging in long-range sniper operations. The HEAT-FS does not lose accuracy nor penetration at the range, giving you the full 300 mm penetration on each hit. A tactic involving shooting and relocating is advisable due to the fact that if an enemy manages to be within range of you, they will only need one shot to take you out.

If facing head-on with an enemy tank, a good option is to first knock out the gunner or to disable the main weapon of the enemy. This allows for time to either retreat, flank or to carefully select your next shot. Note that if you use the HEAT-FS you will be able to penetrate even the front plate of most heavy tanks if they are not angled.

This tank is also well used as a support/scout tank.

The Soviet Union delivered PT-76 tanks to the People's Republic of China in the 1950s. Their lightweight and amphibious capability were appreciated by the PLA, and in 1958 an order was placed for the development of an indigenous vehicle in the same vein. While resembling the PT-76, the Type 63 tanks featured notable differences, such as a new engine, a relocated driver's station, and a new turret with an 85 mm gun. Overall dimensions were slightly enlarged for extra flotation.

The improved Type 63-I variant boasted a more powerful engine. Additional upgrades were developed over the years, and in the late 1990s, the ultimate Type 63A variant entered service, featuring a new turret, a 105 mm gun, and modern fire control systems.