Difference between revisions of "Type 59" 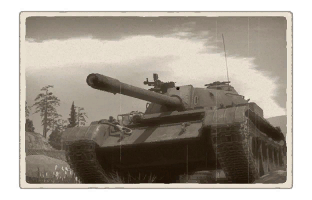 During the early 1950s, the People's Republic of China purchased numerous tanks from the Soviet Union, such as the T-34-85 and the IS-2. Domestic industrial and engineering capabilities were quite limited at the time and the USSR agreed to assist in setting up a factory manufacturing the T-54A in China. The Chinese copies were designated "Type 59" and featured several differences from the original T-54A, such as the deletion of the night vision and possibly stabilizer systems, at least initially.

The Type 59 was produced for a long period of time in several versions, finally appearing in large numbers to completely replace the highly obsolete T-34-85 after a few decades. Though it started out as a competitive design, it became apparent that the Type 59 was in need of some upgrades after a few years. An effort to create a replacement resulted in the Type 69, but this model was not very popular with the PLA, only seeing limited domestic service. As a result the Type 59 remained the premier tank of the PLA for most of the Cold War, seeing some usage in the Sino-Vietnamese War of 1979 and at Tiananmen Square in 1989. When relations with the Western world began to normalize during the late 1970s/early 1980s, foreign technologies were available for integration, resulting in numerous upgraded variants such as the Type 59 D1. Soon afterwards domestic tank development accelerated and the Type 59 was superseded by more modern tanks such as the Type 80/88 series. At present the Type 59 is still present in the PLA's inventory in fairly large quantities, but has been gradually relegated to reserve and training purposes, with more and more units being equipped with far superior Type 96 and Type 99 main battle tanks.

Like the original T-54/55 series, the Type 59 was a popular export item. It was used by the North Vietnamese Army during the Vietnam War alongside its Russian counterpart. It remains in use with countries such as Bangladesh, Pakistan, and Iran, often in heavily upgraded form. Chinese companies still offer comprehensive upgrades and conversions of the Type 59 for export customers.